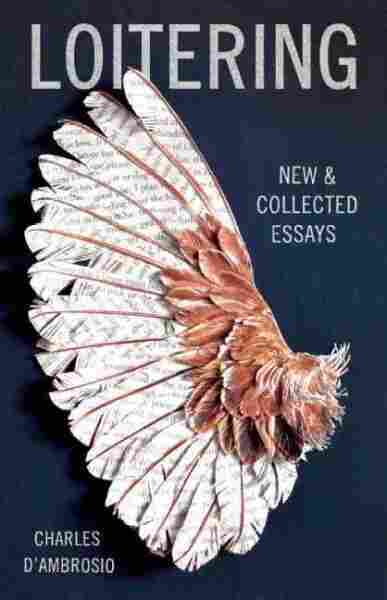 The essay, some time in its long journey from Samuel Johnson's "loose sally of the mind, an irregular undigested piece," has become something that can be persuasive instead of discursive, something that slices and gleams, an accumulation of arguments as relentless as the stacking of bricks.

But the essay has doubt in its bones (at least as far as etymology is destiny). An essay means a trial, a test. And Charles D'Ambrosio — essayist and evangelist of doubt — returns to the form's wandering, irregular origins in his collection Loitering. "It seems to me," he writes in his preface-cum-manifesto, "we've ceded so much space to the expert and the confident authority that expressions of real doubt or honest ignorance are now regarded, in the demotic mind, as a kind of recreancy, a failure of loyalty, the sign of a faith betrayed."

His essays mingle the journalistic (pieces about whales, an evangelical haunted house, a Russian orphanage) with the personal (two brothers who attempted suicide). They are slow rambles, long loiterings that fray the edges of certainty. For D'Ambrosio, doubt is a posture, an ideology, and a choice as much as an actual state. Whenever he gets too polished, he roughs it up a bit. Inevitably, his most lingering, elegant sentences are punctuated with folksy, winning phrases: a dudely "pain in the ass," a daddish "boob tube." It's impossibly charming, and a classic smart-kid maneuver: no one likes a show off.

This careful dance of high and low, of timing, circumspection, and room for nuance — and the disarming honesty — make it clear that D'Ambrosio knows how to write a good essay, but what makes the collection great is his vast, almost painfully acute sense of compassion. The strength of his empathetic imagination, which he extends to the world around him — and, by extension (it feels like) you, is staggering.

I'm thinking particularly about an essay about Mary Kay Letourneau, a teacher who had sex with her adolescent student. The essay is mostly about the language — legal, procedural, psychiatric, journalistic — that surrounded her trial, and how dangerous it is to step outside of the pat, clinical certainty of that language. One of the "credentialed explainers" on TV prefaced a discussion of Letourneau by saying that she "had no sympathy" for her, and D'Ambrosio writes, "[I]t seems odd that an expert whom presumably we've turned to for insight pre-announces as a kind of caveat that sympathy is going to be removed from the equation of her understanding." He's not objecting to her prison sentence — just breaking down, with infinite care, the way that expert vernacular was "carting off pieces of Letourneau" rather than trying to understand her.

Maybe it's odd to call a book kind, but kindness seems to be Loitering's animating principle. "Alone," D'Ambrosio writes (in an essay about whaling, but it fits here, too), "you're vastly outnumbered; but in the company of another, by some weird miracle of human math, the odds seem wonderfully improved in your favor." That is it, the essence of why this book is so very good: it delivers that most primal pleasure of reading — the feeling of being understood, of not being alone.