Accessibility links
Book Review: 'Operation Sea Lion' By Leo McKinstry | Historian Leo McKinstry sheds new light on the British homefront and the failure of Nazi invasion plans, but reviewer J.P. O'Malley says the book is marred by a jingoistic nostalgia for the Empire.

'Operation Sea Lion' Is A Flawed But Fascinating Look At WWII

'Operation Sea Lion' Is A Flawed But Fascinating Look At WWII 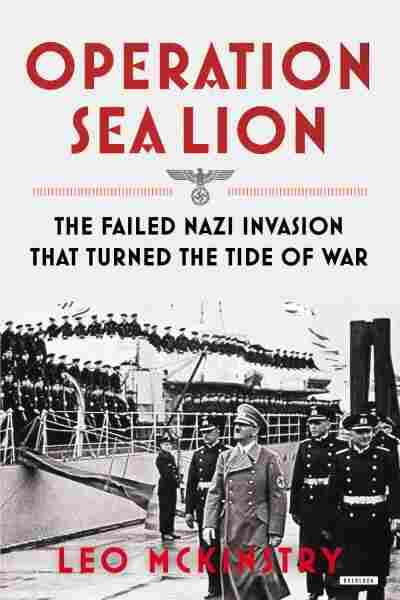 The Failed Nazi Invasion That Turned the Tide of War

During the summer of 1940, the Third Reich occupied most of Europe. If Britain fell too, the complete Nazification of the continent seemed like a real possibility.

And the German High Command had a plan for the invasion: Operation Sea Lion. But the mission never materialized into action.

After the war, many surviving Reich commanders claimed Sea Lion was merely a psychological game meant to demoralize Britain, and that Hitler never believed a full-scale invasion was necessary.

British historian Leo McKinstry claims this is nonsense; his new book, Operation Sea Lion, is a scrupulous examination of the period between June and November of 1940, and a recognition of the importance of the British public — inspired by the poetic words and optimistic spirit of their commander in chief, Winston Churchill — in resisting Nazi forces throughout that year.

The Home Guard was central to that resistance: a large force of volunteers who earned the nickname "Dad's Army." Years later — mainly because of the popular 1970s TV comedy series with the same name — these men became a national joke, lampooned as faux soldiers lacking rifles or uniforms, performing pointless drill routines with broomsticks and pitchforks up and down Britain's coastlines.

But McKinstry argues that Britain was actually far more organized than this farcical mythology suggests. And in parts, his well-researched and cleverly crafted book really is a compelling read.

McKinstry reminds readers how almost every aspect of British society during this period was dictated by the state. Churchill's government implemented an autocratic approach to public affairs: Absolute obedience to authority was the norm, the free market ceased to function, and emergency powers were introduced. The government rounded up foreign nationals in internment camps, and there was even an official plan in place to use chemical weapons against German troops, in the event they actually landed on British shores.

But Hitler's hubris and poor strategic thinking ensured this never happened. McKinstry contends that three major mistakes cost Hitler dearly: his underestimation of Britain's naval power; his lack of understanding of the British political system; and his failure to recognize that a team of intelligence operators at Bletchley Park were decoding key information about the Luftwaffe's plans for aerial bombings.

While McKinstry's writing is exceptionally lucid, the book has several major issues. Firstly, it sinks into sentiment too often, pining for the glory days of the British Empire.

At one point McKinstry quotes a British soldier describing an England of "Cornish fields, little white cottages [and] small roads running into coves by the sea." Constant references to a "spirit of patriotism" that gripped the nation create a mawkish, jingoistic feel in places.

Furthermore, McKinstry's great-man theory of history — which portrays Churchill in messianic terms and as a savior of Western civilization — fails to recognize the prime minister's major flaws, both as a military commander and as a politician.

Even the extremely conservative British historian Lawrence James, in his book Churchill and Empire, admits that Churchill was stuck in a Victorian mindset; he believed in the delusional notion that Britain was still a global superpower and the strongest military nation on the planet. Like Churchill, McKinstry appears to believe in this romantic idea also. But it's incorrect.

Operation Sea Lion: The Failed Nazi Invasion That Turned the Tide of War is a fascinating insight into a definitive moment of World War II. But the version of history that we are presented with here is narrowed down considerably to suit a heroic story that's more sentiment than substance.

J.P. O' Malley is a freelance journalist based in London who writes mainly on books. Follow him on twitter: @johnpaulomallez.