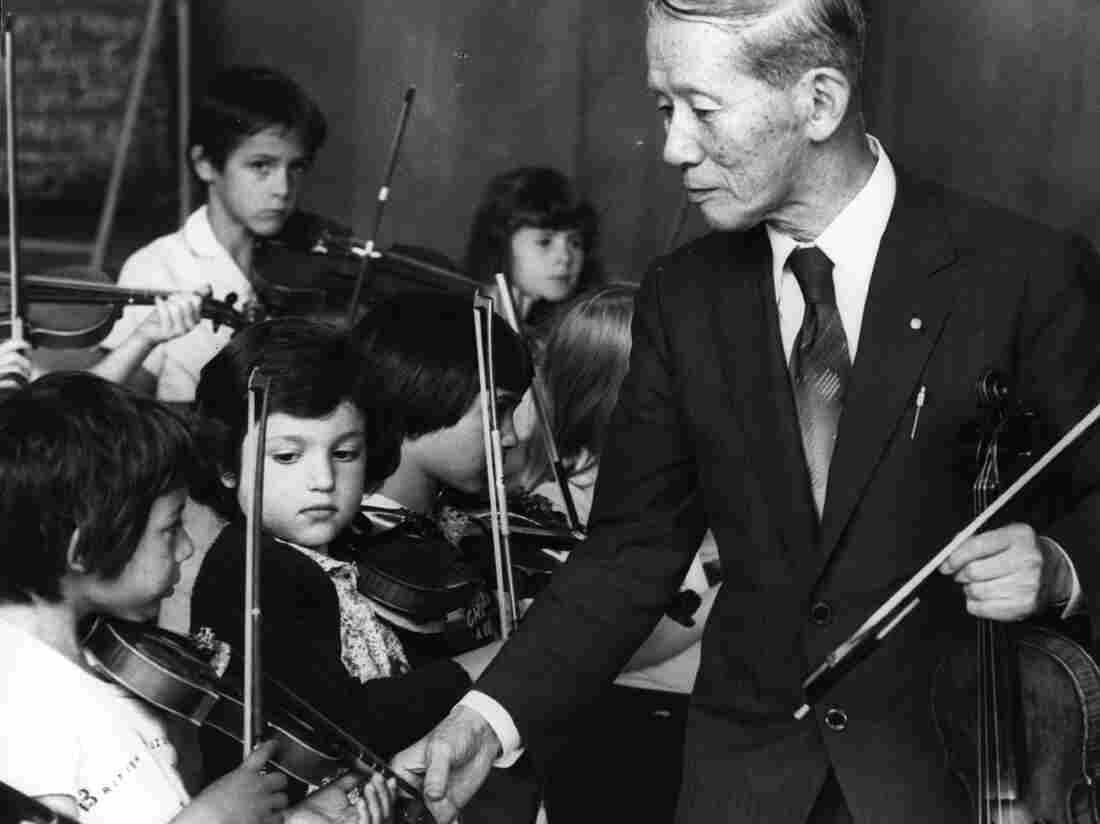 Shinichi Suzuki makes a rare visit to Britain in 1980 to demonstrate the method he developed for learning to play the violin. Ian Tyas/Getty Images hide caption 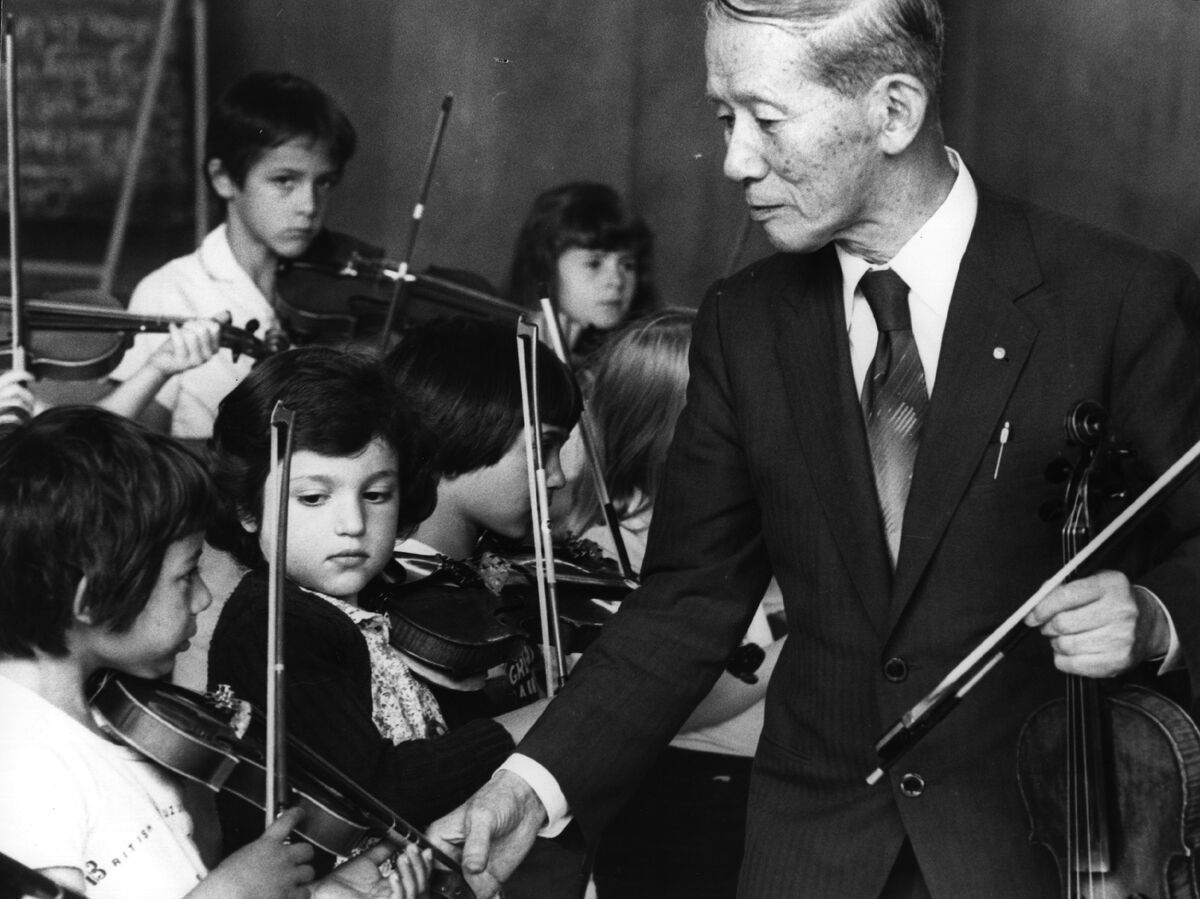 Shinichi Suzuki makes a rare visit to Britain in 1980 to demonstrate the method he developed for learning to play the violin.

If you're a parent, the sound of a small child sawing away at the strains of the "Twinkle Variations" may be all too familiar.

It's Song One, of Book One, of the Suzuki method, a musical pedagogy developed by Shin'ichi Suzuki in the 1960s.

But lately there has been discord among music educators, a feud over methods and credentials and accusations of fraud.

Fiddle player Mark O'Connor — who has his own instruction method — has been criticizing the Suzuki method for years. But what started out as a debate over technique and style turned personal. O'Connor laid out his allegations against Suzuki to NPR two weeks ago.

Suzuki "claimed that he was taking lessons in Berlin for eight years from a big professor of violin called Karl Klingler, and it turned out that he failed his one and only audition with him," O'Connor says.

O'Connor also blogged that Suzuki, who died in 1998, faked a mentor relationship with Albert Einstein and faked an endorsement from one of the leading string players of his time, cellist Pablo Casals.

Suzuki "was able to introduce his methodology from Japan to the United States based on these credentials," O'Connor says.

However, Mark George, spokesman for the Suzuki Association of the Americas, says Suzuki never claimed to have been enrolled in the Berlin Hochschule für Musik (now the Berlin University of the Arts), the esteemed German conservatory where Karl Klingler taught violin.

"So he did audition, and he was not accepted," George agrees. "But he did in fact study with Karl Klingler in his studio outside the school proper."

The problem with this stuff is that it all went down in the 1920's. Concrete documentation is hard to come by. The parties involved are deceased, and a lot of the confusion could be chalked up to mistranslation and even word choice. We are talking about a Japanese music student in pre-World War II Germany.

Anyway, the facts are almost beside the point. This all blew up because the accusations against Suzuki felt so personal to his friends and followers, like George.

"Mrs. Suzuki named my daughter," George says. "So you know, when somebody says not so nice things about them, of course I'm going to respond."

The International Suzuki Association now holds copyright over the Suzuki method, including the Suzuki name. It estimates 6,000 registered Suzuki educators in the U.S. are teaching half a million students each year. Suzuki is the dominant method in this country, which is why O'Connor jumped loudly into the blogosphere.

"There should be room at the table for other methods," O'Connor says. "The Suzuki system seems to be shutting us out from a lot of environments like schools."

"It's not," says Charles Avsharian, CEO of the online string instrument retailer Shar Music. "It's just a popular movement."

Shar Music has sold and supported the Suzuki method from the very beginning. It also publishes the O'Connor method. So Avsharian called for a cease-fire.

"I contacted Mark personally and in so many words suggested that he does not have to blow out another candle to make his burn brighter," Avsharian says.

It worked. O'Connor apologized on Facebook for his harsh words and agreed to dial it down a bit. He did not, however, back away from any of the factual allegations. And his apology has since disappeared from his page.

But in the trenches, was anyone paying attention?

Baltimore Bows Orchestra teacher Yonatan Grinberg tries to keep the attentions of about 30 string players, aged 5 through 12. They play a mix of easy Suzuki staples, O'Connor tunes and folk songs.

"I am not a purist in any method," Grinberg says. "I very strongly believe there is value in many, many different methods."

Grinberg says he takes bits and pieces from all of the pedagogies, and thinks outside of the books, too.

One of his students, 10-year-old violist Mendy Quittner, didn't know about the controversy or even that there are different methods. His mom signed them up for this class because this class was nearby. But his favorite piece of music is a Suzuki staple.

And that's how it should be, Grinberg says. Kids should enjoy learning.

"Did Suzuki know Albert Einstein?" Grinberg asks. "Maybe he did, maybe he didn't. Is that relevant to a kid who's learning to play the violin? Absolutely not."

For his part, O'Connor seems to have moved on. He just got married, and his Facebook page is now dominated by wedding selfies.