Accessibility links
Book Review: 'Young Woman In A Garden' By Delia Sherman Young Woman in a Garden brings together 24 previously published short stories by the fantasy fabulist Delia Sherman. Reviewer Jason Heller says it's full of dazzle and heart, with a dark edge. 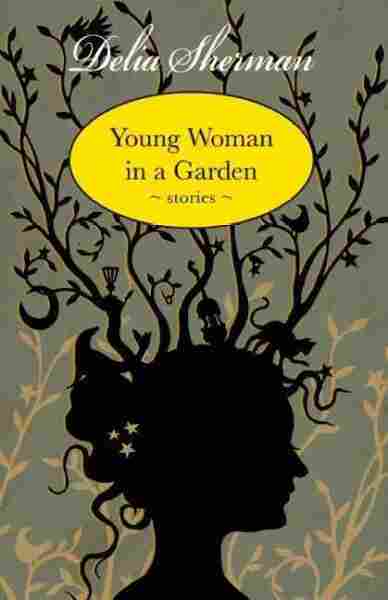 Young Woman in a Garden

"Real magic, right next door," exclaims a character in "Walpurgis Afternoon," one of the short stories in Delia Sherman's stellar short-story collection, Young Woman in a Garden. In it, a family that's hyperconscious of zoning laws and what the neighbors think are faced with the unimaginable: A huge, elaborate Victorian house appears on their block overnight. Two women live in the house, and the secrets they hold will change everything.

Real magic, right next door, indeed; each of the 14 stories in Young Woman in a Garden deals with some version of that equation, and it's a testament to Sherman's award-winning knack for fabulism that she pulls off such impossibilities with whimsy, dazzle and heart — not to mention a sharp edge of darkness.

Sherman's first novel, the celebrated queer fantasy Through a Brazen Mirror, came out in 1988, and since then she has published many short stories. But Young Woman in a Garden is her first collection, which means it draws from decades worth of stories — and it shows. From the title piece's rich mix of art history and forbidden love, to the way the final story, "The Maid on the Shore," reworks the selkie legend in the service of poetic revenge, the book (mostly) maintains an impeccable consistency, even as it veers from past to present and back again.

History looms large in Young Woman in a Garden. Sherman's vivid backdrops — Paris during the Franco-Prussian War, Newfoundland in the 1800s, Victorian Wales in the throes of industrialization — are well-researched and intricately tied to her compelling protagonists. Most of those characters are women, and many of them work around, under or through the patriarchy that shapes their reality.

In that sense, Sherman is a feminist writer, although she lets her gripping plots and twists spell out the message. In "The Ghost of Cwmlech Manor," a precocious Welsh girl falls into a fantastic scenario involving steampunk automatons and, well, a ghost — and everything winds up hinging on her unique strengths.

Sherman has a wide range, and she writes as well about the here and now as she does about centuries past. "The Red Piano" may be the weakest story of the bunch (it originally appeared in an Edgar Allan Poe-themed anthology, and it leans too far toward pastiche), but it's saved by flashes of levity and camp, plus a few self-deflating pop-culture references. "Sacred Harp" reads more like vignette than a full story, which fits its topic well: What happens to a secular chorister when her choir's beatific hymns ends up summoning more than they'd ever hoped for?

Music pops up often in Young Woman in a Garden, as do ships, fairies, art and otherworldly creatures of myth; Sherman weaves them all into her poignant, funny, ribald stories with thoughtfulness and a startling clarity. "La Fée Verte" follows a 19th-century Parisian prostitute and her lover, a woman who claims to have visions of the future; when those visions include a far-fetched voyage to the moon that bears a close resemblance to Apollo 11, it's downright chilling.

Many of the devices that Young Woman in a Garden employs will be familiar to fans of Sherman's novels. "The Printer's Daughter" has a similar bawdy, medieval tone to Through a Brazen Mirror; "The Fiddler of Bayou Teche" shares some genes with her 2011 novel The Freedom Maze; and the notion of supernatural agelessness in "Young Woman in a Garden" and "The Red Piano" also plays into The Porcelain Dove. But it's not necessary to be familiar with Sherman's work in order to enjoy this collection. In fact, the stories — while not directly interconnected in any way — have a flow and cohesion all their own.

"Fantasy makes me nervous," says the main character of "Walpurgis Afternoon," a straight-laced mother who's about to become undone, in more ways than one. Considering the weirdness of Young Woman in a Garden, that statement might as well be Sherman's overarching goal. Only, in her sure hands, nervous is a good thing.