Accessibility links
Book Review: 'The Art Of Asking' By Amanda Palmer Amanda Palmer's new The Art of Asking outlines a well-intentioned but hazy philosophy of asking for help. Critic Annalisa Quinn says Palmer glosses over societal realities of who has access to help. 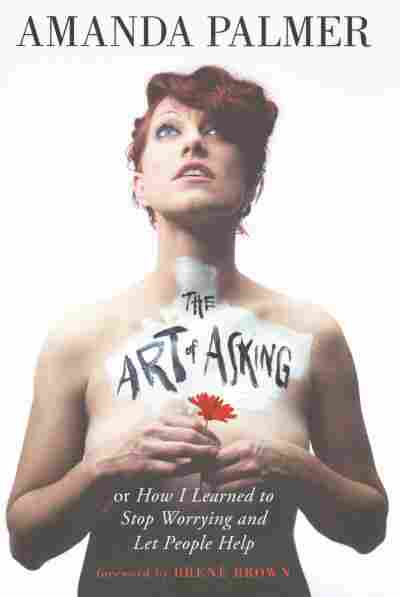 The Art of Asking

Or How I Learned to Stop Worrying and Let People Help

by Amanda Palmer and Brene Brown

Amanda Palmer's well-intentioned, slightly clueless new book, The Art of Asking, is a little bit diary, a little bit TED talk, and a little bit how-to guide. Palmer, Neil Gaiman's wife and one-half of the band the Dresden Dolls, had a well-publicized break from her record label and asked her fans to front the money for her next venture via Kickstarter. She asked for $100,000 — and received $1.2 million. From this successful experiment in asking for help, she has produced a hazy philosophy of asking, built on the pillars of trust, reciprocity, couch-surfing and a lot of body paint.

But in thinking about the art of asking, Palmer misses its most basic tenet: In our society, certain kinds of people are allowed to ask for things, and certain kinds of people are not. She writes as though the biggest obstacle to getting the help you need is a reluctance to ask — not, say, ingrained social structures having to do with race and class.

Who is allowed to ask for help? Who is heard when they ask for help? Whom do people want to help? These are basic questions that get little or no attention in The Art of Asking. Instead, we are coached in letting other people help us: "Your acceptance of the gift IS the gift," she says.

Palmer accidentally hits on truth when she writes, "Effective crowdfunding is not about relying on the kindness of strangers, it's about relying on the kindness of your crowd." "Your crowd" is the crucial phrase. Here, she's of course talking about her fans — as opposed to random strangers. But the uncomfortable, unexamined reality behind her thesis is that you must have a fairly wealthy, leisured and skilled fan base in the first place. Not everyone can ask their crowd for help, because not everyone has a crowd that can help.

Palmer's admirable, if fuzzy, conviction that we are bound together by innate, shared humanity sometimes feels like an excuse to avoid considering people as individuals. "We're all the same on the inside!" is not that far from "Everyone is like me!" which is not that far from "My perspective is universal!" Her point about asking still stands — it is good to ask for help and support from the people around you — but a little more thought about what asking might mean for people other than Amanda Palmer would be welcome.

Palmer's best and worst feature is a chronic inability to understand how she comes across to other people. On the one hand, this lends a wonderful genuineness to her writing. On the other, it often makes her sound like a complete heel.

In a passage about the bombing at the Boston Marathon, she writes, "Everybody wanted to help each other. I twittered over five hundred times that day." Here, she is probably trying to make a point about the way tragedy prompts connection and communication among strangers. But when juxtaposed with the magnitude of the tragedy and the actions of people who responded in tangible, risky ways (first responders, say), the statement about "twittering" makes her sound like a self-regarding jerk. And that's a failure of communication and taste, not necessarily of ethics.

Similarly, the fact that she got huge amounts of money from her Kickstarter campaign and yet offered to pay her volunteer musicians in hugs and beer shows a real ignorance of context and scale. It's another basic principle of human interaction: What is acceptable in one context is not always acceptable in another context.

But there are worse things than having little sense of optics or propriety. Amanda Palmer's book has a strong, if nuanceless, ethical underpinning, and she is clearly thinking actively about how best to be kind and fair to the people around her. And that's not nothing.