Accessibility links
It's Getting Serious In Panem As 'Mockingjay' Goes Dark The first half of the last third of the Hunger Games trilogy — really — dismisses much of the colorful action of the first two films and draws focus to a dangerous propaganda war.

It's Getting Serious In Panem As 'Mockingjay' Goes Dark

It's Getting Serious In Panem As 'Mockingjay' Goes Dark 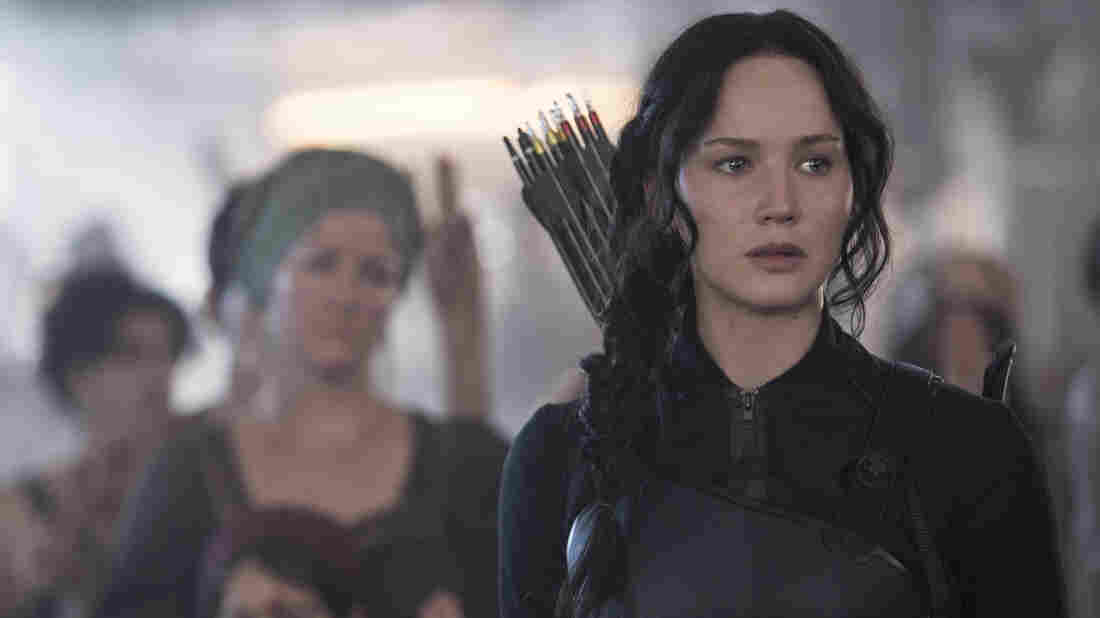 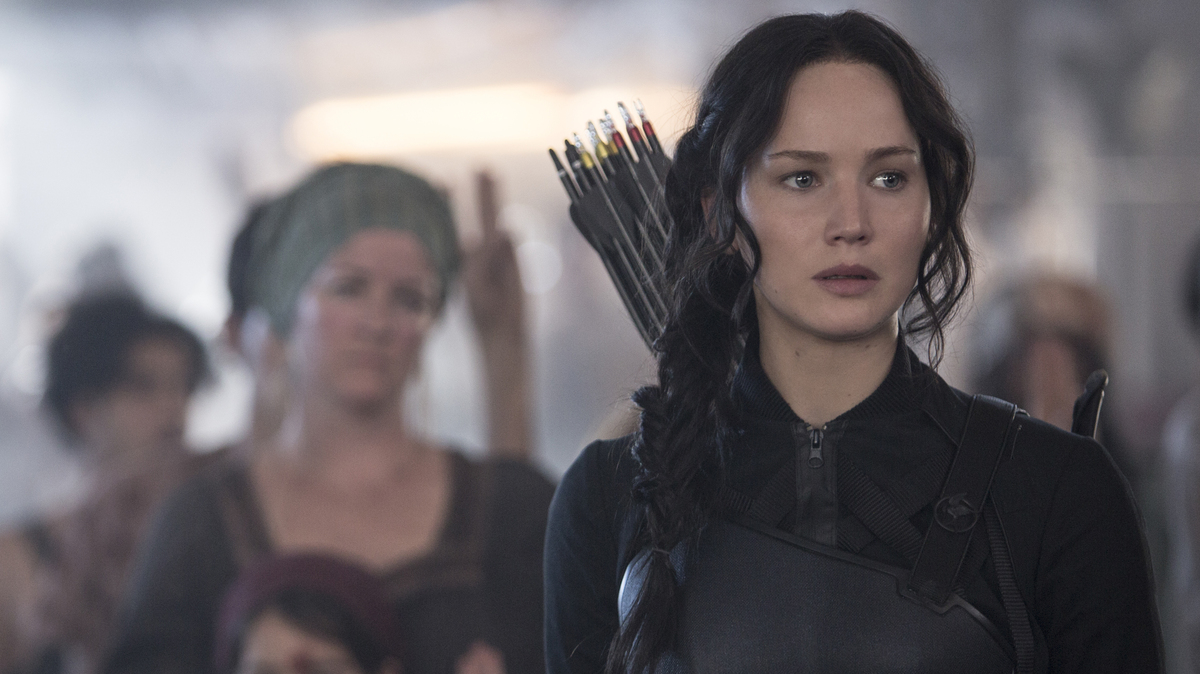 When producers were laying track for the Hunger Games series years ago, they couldn't have foreseen how discomforting author Suzanne Collins' descriptions of a war-torn authoritarian state would look on the big screen in 2014. In The Hunger Games: Mockingjay - Part One, Jennifer Lawrence witnesses and/or learns of: towns reduced to rubble, refugee camps next to mass graves, public executions of innocents with burlap sacks over their heads, law enforcement gunning down protesters in the street, and a military bombing a hospital filled with civilians. All of these images have resonance in real events of this year, generations before Collins predicted civilization would devolve into a regime that maintains control over its citizens with televised death matches.

The series has always evoked real geopolitics, but the earlier films offset those with self-parody: an abundance of purple hair and oily camera-ready suits, an outlandish imperial march composed by Arcade Fire. This playfulness is absent from Mockingjay, which is laser-focused on the land of Panem quashing dissent by any means necessary. It's not that the film is "too dark for kids" — that would drastically underestimate teenagers' capabilities for darkness. It's that this degree of nastiness doesn't square with the empty-calories action scenes of the first two films, where nothing that happened in the Hunger Games arenas (Look out! Wild monkeys!) seemed to impact the overall story.

But maybe it's a good thing to be more serious this time, even if the progression wasn't gradual. "A little on-the-nose, but, of course, so is war," remarks the dearly departed Philip Seymour Hoffman, playing an architect of the Panem resistance movement. He's referring to a tweak he's made to a rally song, but he could also be discussing Mockingjay itself, how a mass appeal sci-fi franchise chooses its war imagery. In a film about the role that visual communication plays in public opinion, the on-the-nose approach is at once intriguing and exhausting. Strange to think this series used to be about archery in the wilderness.

That, anyway, is where fiery revolutionary Katniss Everdeen (Lawrence) was at the conclusion of the previous film, 2013's Catching Fire. Rejecting society's pressure to kill her friends for amusement a second time, Katniss instead shot a hole in the sky, through which she has been whisked away to the super-secret underground rebel stronghold District 13. In the first two films, Katniss was a pawn of Panem's dastardly, white-bearded President Snow (Donald Sutherland, forever sneering). Sadly, she's still a pawn, but of a nobler president, the benevolent but still white-haired District 13 leader Alma Coin (Julianne Moore, a hair too robotic). Coin needs Katniss to be her "Mockingjay," a symbol around which to mobilize the citizens of Panem: a warrior who's no-nonsense yet down-to-earth. In short, she needs Katniss to be Jennifer Lawrence.

Until now, the biggest strength of the Hunger Games series has been the careful construction of Panem, a dystopia-lover's utopia. All the details from the first two entries were rich in cinematic absurdity, like the party where the rich gladly vomit up their food, or the gaudy stage sets that accompany Stanley Tucci's gleeful talk show host as he conducts cloying interviews with Games candidates. Having to trade such an expansive setting for a drafty underground bunker (District 13 must be sharing the lease with the Zion rebels from the Matrix sequels) is the weakest part of Mockingjay, along with Katniss' friend-and-maybe-more Gale (Liam Hemsworth) and his mopey "I have feelings, too!" jealousy.

There's also no escaping the fact that this film, co-written by Collins and two others, is a stopgap designed to string audiences along one year more than the source material requires. The artificial division of a narrative for the sole purpose of making money should not normally be cause for a creative success. But somehow, chopping up Mockingjay, a practice that has become the norm with final installments of YA series adaptations, created some happy accidents. With less material than in Catching Fire, director Francis Lawrence is free to be contemplative, edit sequences patiently instead of frantically, and linger over small visual details like a speck of blood on Snow's cheek after his groomer cuts his face shaving. And Jennifer Lawrence has the freedom to interact with each of her allies in more subtle ways: practiced patience with Elizabeth Banks' fallen fashion maven, Effie; steely distrust with Woody Harrelson's rakish mentor, Haymitch; sheer annoyance with her cat.

Josh Hutcherson, a bit wooden in the other films, is also doing something fascinating as Peeta, Katniss' on-camera boyfriend who was captured by Panem's Capitol at the conclusion of Catching Fire. For much of Mockingjay, we see him only via the Capitol's authorized interviews saying questionable things about the revolution. Like Katniss, we can only guess at his current state of mind. Hutcherson's strong, subtle performance lets us read any number of possibilities in his face and minimal line readings. That's until the very end, when he turns chilling.

If any of this felt like Hobbiting — defined as the practice of throwing useless, fan-serving footage onscreen to bloat up a blockbuster franchise — there'd be a problem. But Mockingjay doesn't have that vibe, because it follows one unmistakable theme from beginning to end: an information war. Instead of physically dueling, Katniss and the Capitol fling propaganda films like projectile bombs.

The chess match of public opinion is a colder, more calculated game than the testing of wilderness survival skills. Katniss, reluctant viral video star, hilariously fumbles her lines when she's in front of a green screen leading the CGI army from a Ridley Scott movie. But she draws tears when a tattooed documentarian (Game of Thrones' Natalie Dormer, who could have stepped out of a Copenhagen artist's co-op) films her examining the rubble of her childhood home. It's the latter footage, the on-the-nose war stuff, that drives Panem to rebel rather than change the channel to Where Are My Pants? Collins and the Lawrences have crossed the uncanny valley separating imagined dystopia from actual horrors, but they're also delivering a life lesson in cinema to teens: Things are stronger when they look real. Think about that when the Capitol beams out the next all-CGI superhero movie.