Accessibility links
Vinyl, Once Thought Dead, Makes A Comeback In The Digital Age In the last six years, vinyl sales have tripled. Manufacturers are now having a hard time keeping up with demand. 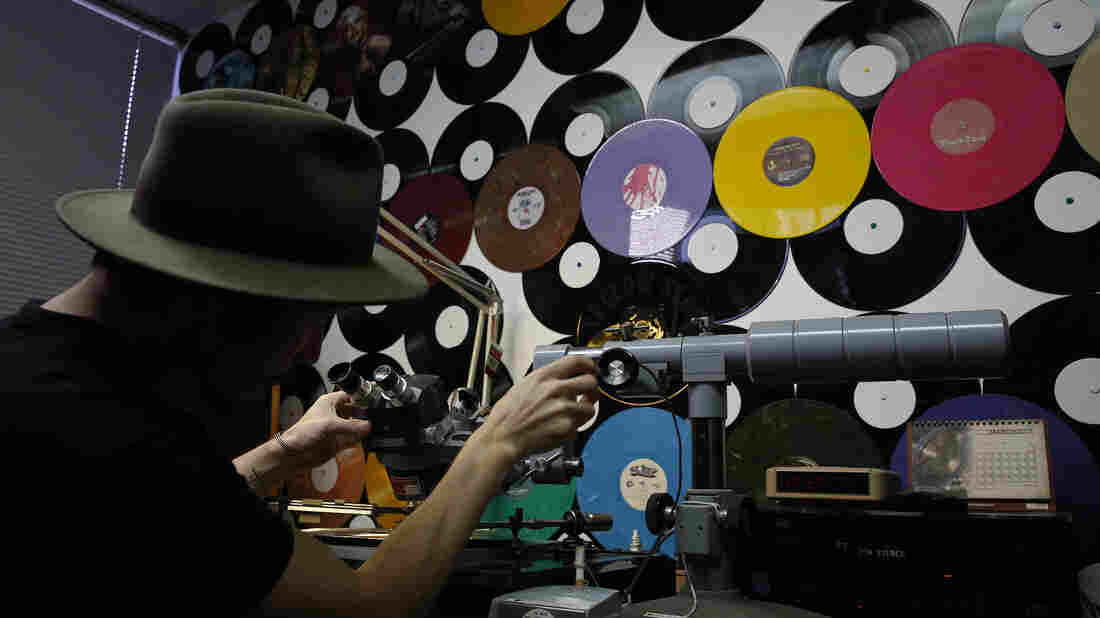 An employee demonstrates how a mother is checked for sound quality before it is duplicated during production at the Rainbo Records factory in Canoga Park, Calif. The vinyl record industry has seen an uptick in sales in recent years, keeping manufacturers like Rainbo busy. Patrick T. Fallon/Bloomberg via Getty Images hide caption 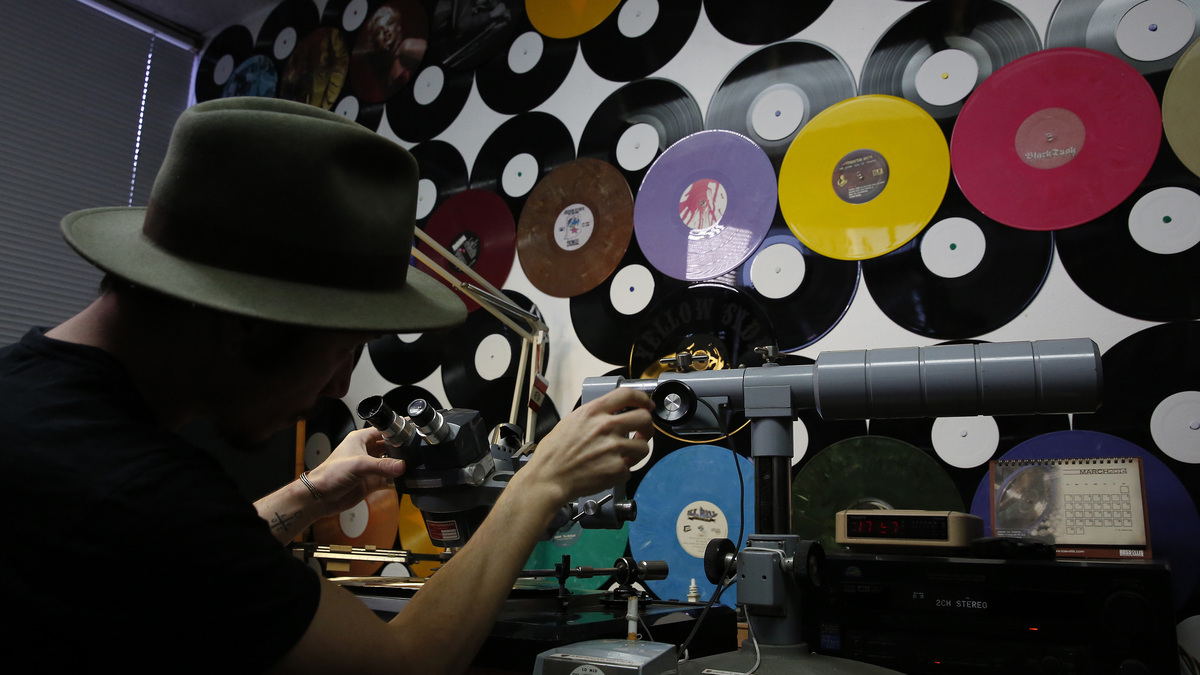 An employee demonstrates how a mother is checked for sound quality before it is duplicated during production at the Rainbo Records factory in Canoga Park, Calif. The vinyl record industry has seen an uptick in sales in recent years, keeping manufacturers like Rainbo busy.

Everyone thought he was crazy; they told him it was a dead format. But Sheldon was adamant.

"I actually said, many times, 'I think it will be around longer than CDs,' " Sheldon says.

Today, his Canoga Park, Calif., operation is massive. There are sound testing rooms, large printers for making labels and rows of workers stuffing sleeves. And then there are the actual presses themselves — 14 of them — giving off smoke and smelling of burnt rubber.

Sheldon describes the process as being somewhat like using a waffle iron. Instead of batter, they start with melted vinyl, squeezing it into a groove using hydraulic pressure.

The entire plant produces 28 records a minute, but Sheldon wishes he could press more. He's increased his staff and now presses records 24 hours a day, 6 days a week to keep up with demand.

And it's not just Rainbo Records: Vinyl presses all across the country are feeling the strain as the old format makes a comeback with a new generation.

"Vinyl right now is really the only bright spot in terms of album sales this year," says Keith Caulfield, who tracks music charts for Billboard Magazine. He says before 2008, vinyl sales were so low they didn't even publish the numbers.

But in the last six years, vinyl sales have tripled; in the first part of 2014, Billboard counted 6.5 million units sold. Currently vinyl makes up 3.5 percent of overall music sales, according to music tracker Nielsen SoundScan; a decade ago, that figure was 0.2 percent.

Digital downloads and CDs still make up the majority, but sales for those formats are down.

"It's just really hard to convince people to spend money on buying music — period," Caulfield says. "You know, it's hard to get people to even buy a subscription to services like Spotify or Beats Music."

Caulfield says if you can actually find a segment of the marketplace where there is growth, like vinyl, then that's something to cheer — and that's a product they ought to make more of.

National retail chains like Best Buy, Urban Outfitters and even Whole Foods are taking notice. They now carry vinyl in some stores across the country.

But it's the indie stores, the old mom-and-pop shops, that still make up the backbone of vinyl sellers. Stores like Amoeba Music in Hollywood, where on a recent day Asaf Mordoch was in the rock section, a genre that makes up the majority of vinyl purchases.

Now 37, Mordoch has been collecting records since he was 12 years old. Flipping through the B section records of Bowie, Bon Jovi and Blur, he says back in the day, records were harder to find.

Commerce Vs. Consumption: A Revolutionary Rethink Of Billboard's Album Chart

"You usually had to go through swap meets [or] dig through people's garages," Mordoch says. "But because there were less stores and less buying and selling, there was also a lot less competition."

People buying records today range from the nostalgic to the curious. And for many shoppers, like 28-year-old Veronica Martinez, it's about making music tangible.

"The way I consumed music has been so instant and so immediate, especially with Spotify and online streaming services," Martinez says. "I kind of just want to go back to the way I used to listen to it as a kid."

Martinez says that's what happens when she picks up a record, looks at the artwork, and reads the lyrics. She says she's becoming immersed in what the artist is intending to do.

Customers like Martinez are giving vinyl pressers like Steve Sheldon extra business. He says that if you wanted to place a vinyl order now, you would have to wait as long as five months to receive it.