Accessibility links
Review: 'The Strange Library' By Haruki Murakami Haruki Murakami's 2008 novella about a young student trapped in an eerie library has just been translated into English. Critic Alan Cheuse calls it awfully weird and utterly down to earth. 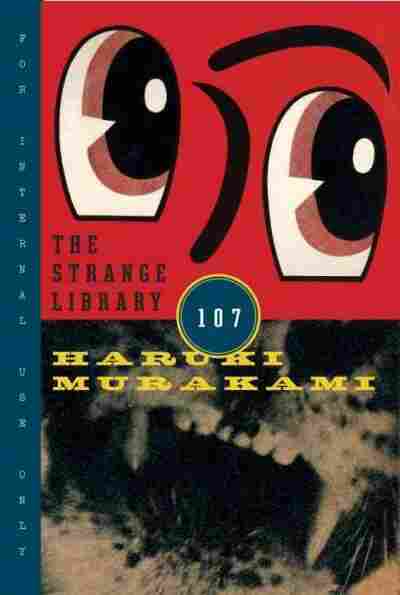 by Haruki Murakami and Ted Goossen

As if the work of Japanese fiction master Haruki Murakami weren't strangely beautiful by itself, his American publisher has just put out a stand-alone edition of his 2008 novella The Strange Library, in a new trade paperback designed by the legendary Chip Kidd.

"The library was even more hushed than usual," we read in the opening sentence (the entire book is set in a typeface called, appropriately, Typewriter), calling attention to the fact that we're in for a special event. Murakami sets his story — newly translated from Japanese by Ted Goossen — in a realm of words, an unnamed city library. An inquiring schoolboy stops by on the way home from class, returns some library books (How to Build a Submarine and Memoirs of a Shepherd) and asks for reading on a subject he says has just popped into his head: tax collection in the Ottoman Empire.

An unfamiliar female librarian sends him down to room 107, "a creepy room" where yet another strange librarian (a bald man this time) hands him the requested volumes — then conducts him to a secret space, behind a locked door and down a hall to a labyrinth of corridors, where a small man dressed in a sheepskin puts him in a cell under lock and key.

In that cell the boy must commit to memory the three books he asked for, after which — the bald librarian says — he will be allowed to leave. But the small fellow in sheepskin banishes that comforting fiction: What really will happen after he memorizes the books is that the bald librarian will lop off the top of his head and eat his fact-filled brains (because, he explains, "brains packed with knowledge are yummy. They're nice and creamy. And sort of grainy at the same time").

The student, already upset that his mother will worry if he does not return home in time for the evening meal and worried that his pet starling will starve, becomes terribly afraid that he will not leave the library alive.

As if all this so far were not dreamlike and dark enough, the story then opens up to even more fantastic elements — a semi-invisible girl who slips between the bars, in and out of the boy's cell bearing food, a hint that the boy has never been quite right since a dog attack in his childhood, and looming over all the threat that he may die here, his brain consumed by the bald librarian.

When escape from his cell seems impossible, the boy decides that "the best thing I could do was sit at the desk and read. ... I picked up The Diary of an Ottoman Tax Collector. ... The book was written in classical Turkish; yet, strangely, I found it easy to understand. Not only that, but each page stuck in my memory, word for word." And he becomes lost in the world of the life of this bureaucrat in the world of the Ottoman Empire, just as readers will get caught up in the world of the strange library.

From there on, as Lewis Carroll wrote in Alice in Wonderland, things get curiouser and curiouser. And the story itself, full of characters and images both awfully weird and utterly down to earth, transforms as you read it, becoming a living, nearly talismanic exercise in how to lift yourself out of the realm of the ordinary and allow the sentences to carry you into an alternate universe.

The mysterious pleasure of it all is the payoff when you read Murakami. Some scholar may explain it to us all one day, diagram the roots of his work in the Japanese storytelling tradition, in fable and myth, the special effects he imports from American literature. For me, now, I'm just enjoying basking in the heat of this hypnotic short work by a master who is playing a long game.