Accessibility links
Book Review: 'How To Be Both,' By Ali Smith Ali Smith's new How To Be Both combines inventive structural trickery and warm, sardonic writing in in parallel tales of a bereaved modern teenager and an Italian renaissance fresco painter. 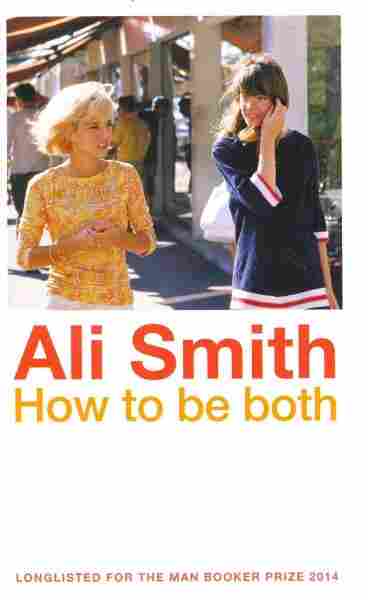 How to Be Both

Title
How to Be Both
Author
Ali Smith

Can a book be both linguistically playful and dead serious? Structurally innovative and reader-friendly? Mournful and joyful? Brainy and moving? Ali Smith's How To Be Both, which recently won the prestigious, all-Brit two-year-old Goldsmiths prize for being a truly novel novel, is all of the above — and then some.

Smith, whose books include The Accidental, There But For The, and the essay collection Artful, has outdone herself with How To Be Both. Ingeniously conceived as what her publishers are calling a "literary double-take," the novel is being published in two editions — same cover, but with its two sections switched. Some copies begin with a contemporary story of a whip-smart English teenager mourning the sudden death of her brilliant, feminist mother. Others begin with the genre-and-gender-bending tale of an Italian Renaissance painter, a story that could be titled "Art isn't easy."

Like the frescoes it describes, How To Be Both can be approached from both sides; the order in which you read the sections subtly changes the emphasis. In truth, you can't fully have it both ways because, after reading the contemporary story first (as I did) there's no way to unread it so you experience the historical half with a blank narrative canvas (and vice versa). Still, there's pleasure aplenty in starting over once you've read to an end, guaranteed you'll notice different things.

At the heart of Smith's novel is an allegorical fresco of the seasons by the 15th century artist Francesco del Cossa (he's real, and so is the fresco). In the book's contemporary section, 16-year-old George (short for Georgia, but named for the song "Georgie Girl") recalls a trip with her mother to see the attention-grabbing mural in Ferrara, Italy — just four months before her mother, an economic journalist famous for leading a subversive artsy Twitter movement called Subverts, dies unexpectedly at 50.

Flipping back and forth in her mind between their spring trip and the soggy New Year's Eve at home in Cambridge that rings in her first calendar year without her mother, George remembers their discussion of the painting, which she describes as "a giant comic strip." Her mother, a "renaissance woman" holding multiple degrees, including art history and women's studies, effortlessly flags the sexual symbolism and "constant gender ambiguities running through the whole work."

An 'Artful' Approach To Literary Criticism

She also marvels — in a comment that George will replay repeatedly — that Del Cossa's fresco is at once warm, friendly, generous, and sardonic — but "never sentimental." Her mother adds, "It's a bit like you." And, of course, like Smith's writing.

We feel for George as she questions how a person can "just vanish," nurtures her much younger brother, and endures her school therapist's "soul-destroying" practice of either repeating everything she says or sitting in silence.

Assigned in school to demonstrate the difference between empathy and sympathy, George and a wonderfully quirky new friend, H, bandy various options, including a dramatization of the life of del Cossa (who died young, of the plague).

George becomes obsessed with del Cossa's only painting at the National Gallery in London — where the reanimated artist, wandering in this oddly horseless purgatorium of people affixed to their "holy votive tablets," finds her in the other half of the novel. This, George has noted, is "exactly the kind of stunt her mother would pull." While you're "waiting and waiting" for "the person you needed" to come back, what you'd get would be "some dead renaissance painter going on and on about himself and his work and it'd be someone you knew nothing about and that'd be meant to teach you empathy, would it?"

To say that there's more than meets the eye in this terrific book is a gross understatement; it encompasses wonderful mothers, unconventional love and friendship, time, mortality, gender, the consolations of art and so much else. As George comments, "there's always more to see, if you look."

Once again, Smith's affinity for beguiling oddballs and the pertly precocious rivals J.D Salinger's, while her penchant for puns yields delightful riffs like monitored/Minotaured and vision/regardless. As in There But For The, she's partial to the unfinished phrase, which she leaves for readers to complete, including this open-ended ending: "It's definitely something to do. For the forseeable."

"You know, Georgie, nothing's not connected," George remembers her mother telling her. It's another apt assessment of this gloriously inventive novel.