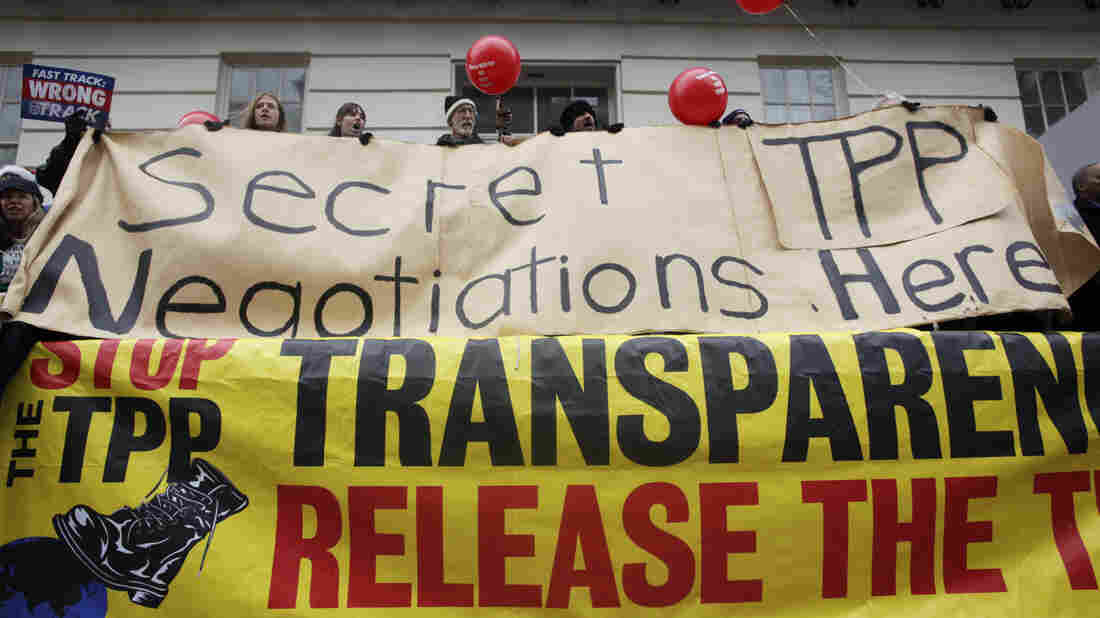 Environmentalists from the Sierra Club, union members with the Communications Workers of America and even a few members of Code Pink gather to protest the Trans-Pacific Partnership Negotiations in Washington, D.C., on Monday. James Clark/NPR hide caption 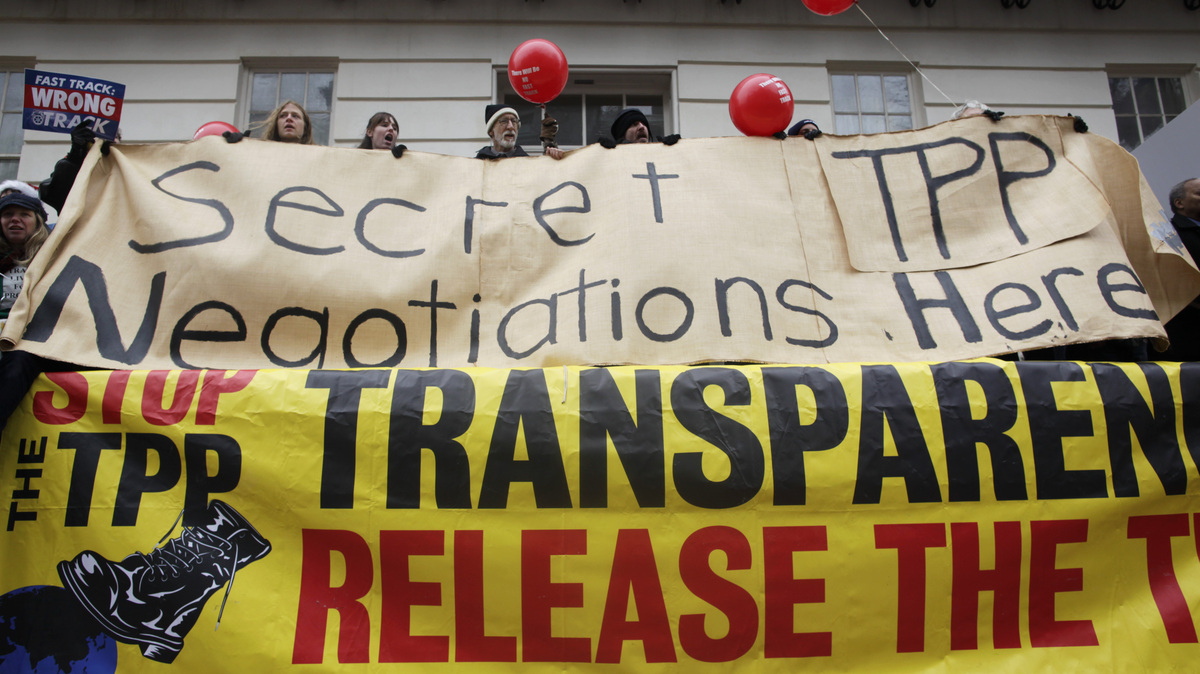 Environmentalists from the Sierra Club, union members with the Communications Workers of America and even a few members of Code Pink gather to protest the Trans-Pacific Partnership Negotiations in Washington, D.C., on Monday.

When it comes to environmental regulations, taxes and the minimum wage, business groups generally object to President Obama's positions, while liberals support him.

But one issue blurs the usual political lines: trade.

Just last week, Obama told the Business Roundtable he would push to complete massive trade deals with both Asian and European nations. "If we can get that done, that's good for American businesses," he said.

On Monday, as negotiators from Pacific Rim nations assembled in Washington to advance the Trans-Pacific Partnership (TPP), they were met by protests from liberal groups — including environmentalists, union members and consumer advocates.

Outside of the U.S. Trade Representative's office near the White House, the protesters carried signs saying, "TPP = Polluters' Bill of Rights" and "Save Our Jobs."

Shane Larson was among them. He says he objects to the way trade negotiations are conducted, which is in private. "The people are completely shut out of having input in what the trade agreement should look like," said Larson, the legislative director for Communications Workers of America, a union that strongly endorsed Obama's election.

Earlier in the day, several liberal lawmakers spoke with reporters, raising objections to the trade pact that would tie together the U.S. economy with 11 others around the Pacific Rim, including Japan, Malaysia, Vietnam and Australia.

"The administration refuses to change its approach to secret negotiations and is pushing to send a final package to Congress with almost no ability for us to scrutinize it," said Democratic Rep. Rosa DeLauro from Connecticut.

In a political twist, many Tea Party Republicans agree with the liberals.

Such authority allows the president to have his representatives settle a deal with negotiators from other countries. The completed trade package then is brought before Congress for a straight yes-or-no vote, with no amendments.

Supporters say it would be virtually impossible to complete a trade agreement if Congress were to keep changing the details by tacking on amendments. 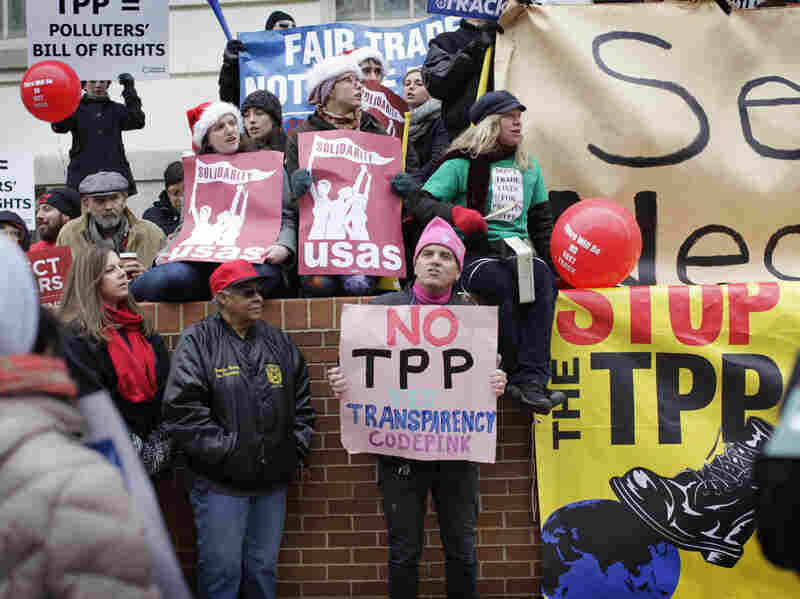 Protesters of varied stripes and political affiliations gathered outside the Office of the U.S. Trade Representative where negotiators from 12 nations were meeting to discuss the Trans-Pacific Partnership. James Clark/NPR hide caption 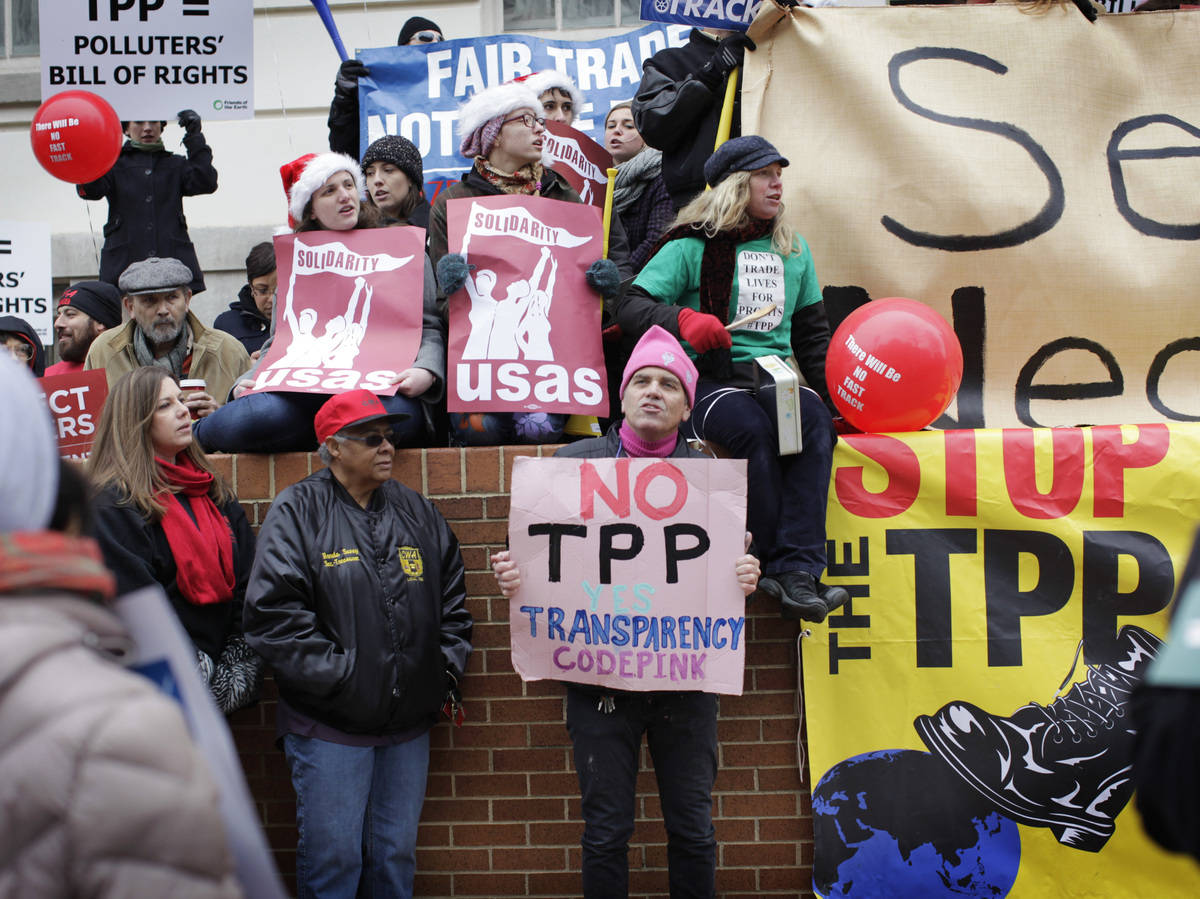 Protesters of varied stripes and political affiliations gathered outside the Office of the U.S. Trade Representative where negotiators from 12 nations were meeting to discuss the Trans-Pacific Partnership.

Historically, trade negotiations have been conducted in closed meetings where officials can go over arcane details and work out disagreements. Once the ink is dry, then the completed agreement, which might fill hundreds of pages, is opened up for Congress to examine before voting.

Congress first approved "fast-track" legislation in 1974, but the authority has expired. Obama wants the new Congress to renew it early in 2015 so that he can wrap up both TPP and a similar trade package involving the European Union.

Business groups such as the Chamber of Commerce and the Business Roundtable strongly support that effort.

But the Republicans who wrote to Boehner say Obama cannot be trusted with the same powers that Congress has given to previous presidents. "The habitual abuses of power by this president have eroded the faith of the American people, who no longer trust his judgment or leadership," the letter said.

The economic stakes in this debate are high, and the lobbying will be intense. Agricultural trade is sure to be among the key issues.

The U.S. Trade Representative's office estimates U.S. exports of agricultural products to the 11 other countries are worth nearly $60 billion. Opening up those markets to more U.S. grown rice, pork, chicken and other foods could be big boost to many U.S. farmers. For example, in Malaysia, U.S. poultry faces a 40 percent tariff, which would be eliminated under TPP.

But other farmers and ranchers have joined the Coalition for a Prosperous America, a broad group that — for various reasons — objects to the way trade pacts are put together.

Despite any political obstacles, Obama said he is upbeat about the prospects for trade. "In Asia, there is a great hunger for engagement with the United States of America, and the Trans-Pacific Partnership is moving forward," he told the Business Roundtable. "We are optimistic about being able to get a deal done and we are reinvigorating the negotiations with the Europeans on a trans-Atlantic trade deal."