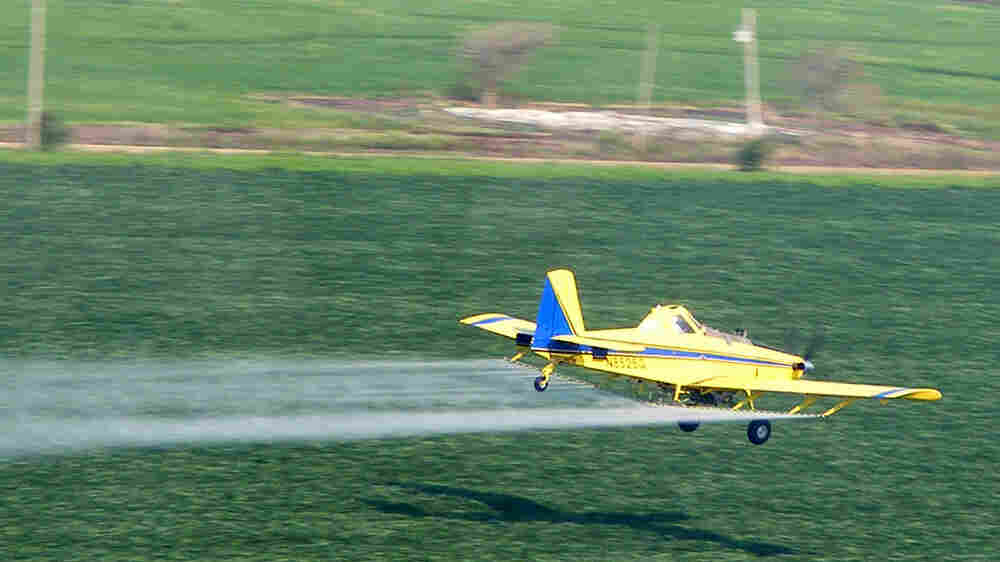 A pilot for Earl's Flying Service sprays chemicals on a field in southeastern Missouri. Courtesy of Mike Lee hide caption 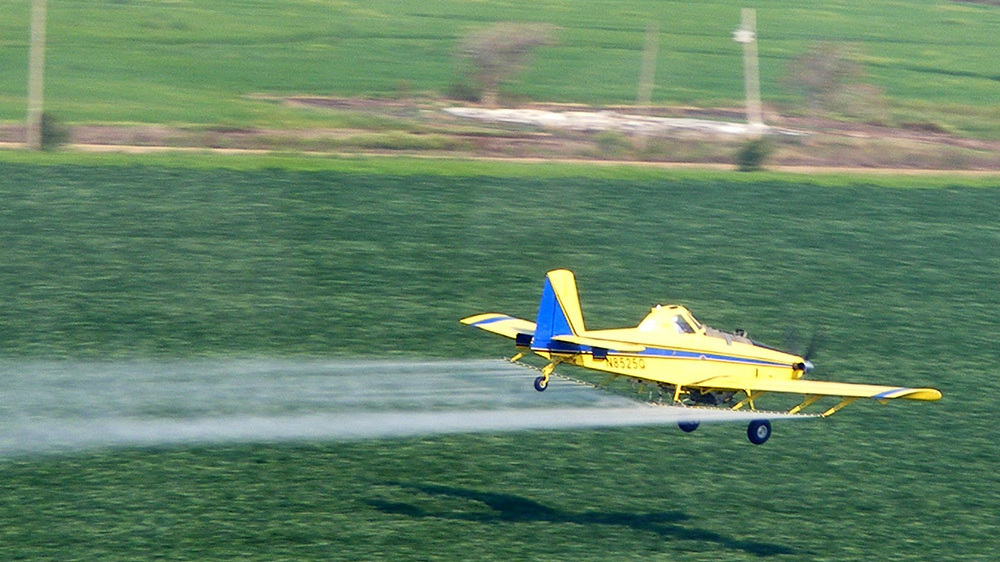 A pilot for Earl's Flying Service sprays chemicals on a field in southeastern Missouri.

Crop-dusting pilots are the adrenaline junkies of the agriculture world. They whiz through the air, flying under power lines to sow seeds or spread pesticides on farmers' fields.

It's a dangerous job, and now these pilots are facing a new challenge — short towers that can sprout up in fields overnight. These towers are used to gather data for wind energy companies.

Pilot Mike Lee started Earl's Flying Service in Steele, Mo., in the early 1970s and has been flying ever since.

"I know some people who have had accidents. I've had friends that got killed in these things," he says.

When he's crop-dusting, Lee flies at 155 mph at the crazy-low elevation of 12 feet. Farmers hire him because it's a quick, efficient way to get things done. There's no driving out to remote fields or slogging equipment through the mud. It's all done by air from the cockpit.

Crop-dusters are the ultimate multitaskers. They fly while dodging obstacles like trees and power lines. They don't want to pour pesticides on a farmhouse by mistake or sprinkle the wrong seeds on a neighbor's field. Pilots are stumbling across a new hazard now: unmarked towers that are used to prospect for wind energy projects. 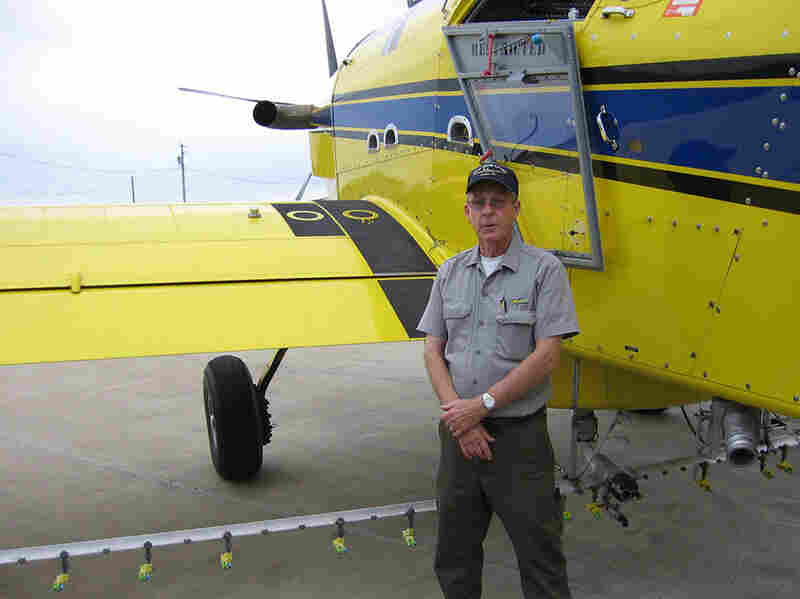 Missouri pilot Mike Lee stands next to a crop-duster. "I know some people who have had accidents. I've had friends that got killed in these things," he says. Jacob McCleland/Harvest Public Media hide caption 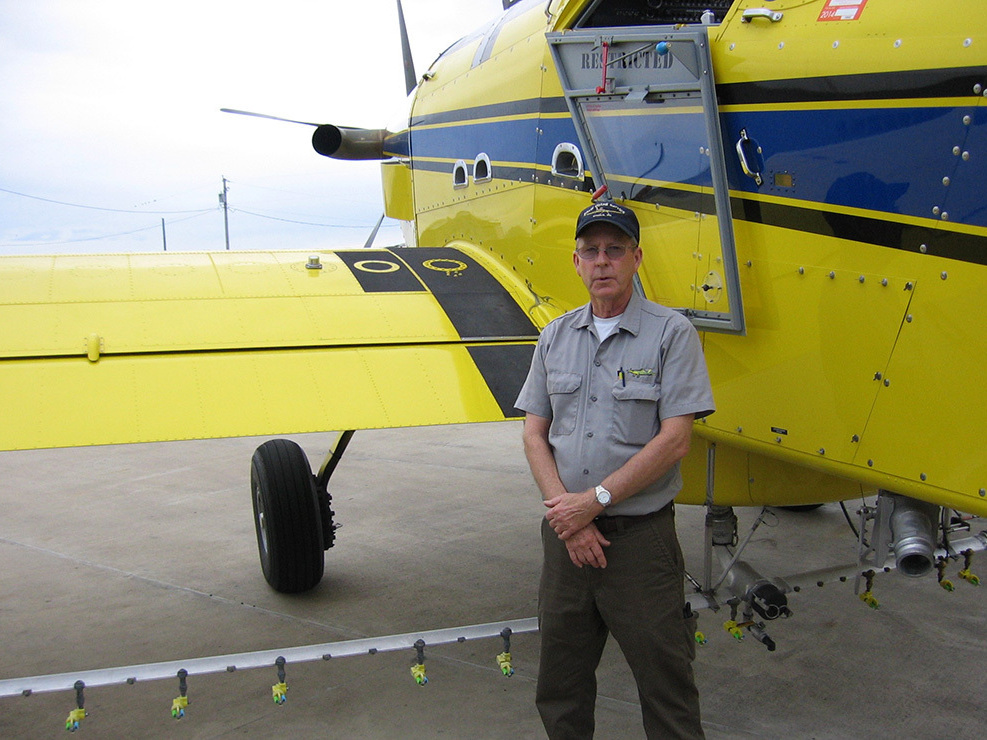 Missouri pilot Mike Lee stands next to a crop-duster. "I know some people who have had accidents. I've had friends that got killed in these things," he says.

"You have to be able to just ... fly by the seat of your pants and not even think about flying to do all of that. You gotta spend all your concentration looking outside and doing all the controlling the seed or fertilizer or chemical or whatever it may be at the time," Lee says.

That's part of what makes this job so dangerous. Pilots' attention is divided, and they work long hours. During the growing season, they fly sunrise to sunset.

"Radio towers seem to be the No. 1 problems. You know, these little weather MET towers they stick up overnight and nobody knows about. It's been a major problem in our industry," Lee says.

Those METs — or meteorological evaluation towers — are thin and metal; they kind of blend in from the air. Farmers lease some of their land to wind energy companies that use them to gather data.

"They are below the 200-foot requirement that the FAA has that requires them to be lit and marked to increase their visibility," she says.

In a report earlier this year, Rodi and the NTSB made recommendations to the FAA to mark and light those towers and to create a database with the location of each one.

But lighting is trickier because towers are often in remote locations without a power source. And wind farm development is a very competitive process. That's why the database with each tower's location is a thornier recommendation.

"People are very hesitant to let competitors know where they may be looking, and so there has been some concern about having widely available public databases," Vinson says.

Since 2000, three pilots have died after striking unmarked METs. Just this September, the family of a California pilot was awarded a $6.7 million wrongful death settlement after his crash into an unmarked MET.

When you look at the big picture, crop-dusting has become safer. Accidents are down, and fewer crashes are fatal.

Pilots have better training, and Mike Lee says the airplanes now are designed for safety. Pointing to one of his planes, he says it was made to absorb energy in a crash.

"Kind of a like a NASCAR, it's going to disintegrate around you, and most likely you'll still be holding the stick and in the seat when it's all said and done," he says.

That may be reassuring for some crop-dusters, but from the pilot's perspective, knowing the exact spot of every potential hazard works even better.