Accessibility links
A Different 'Annie,' But Still A Good Kid The new adaptation of Annie, starring Quvenzhane Wallis and Jamie Foxx, isn't the same Annie some of us knew in childhood. But on her own terms, she's still a charmer.

A Different 'Annie,' But Still A Good Kid

A Different 'Annie,' But Still A Good Kid 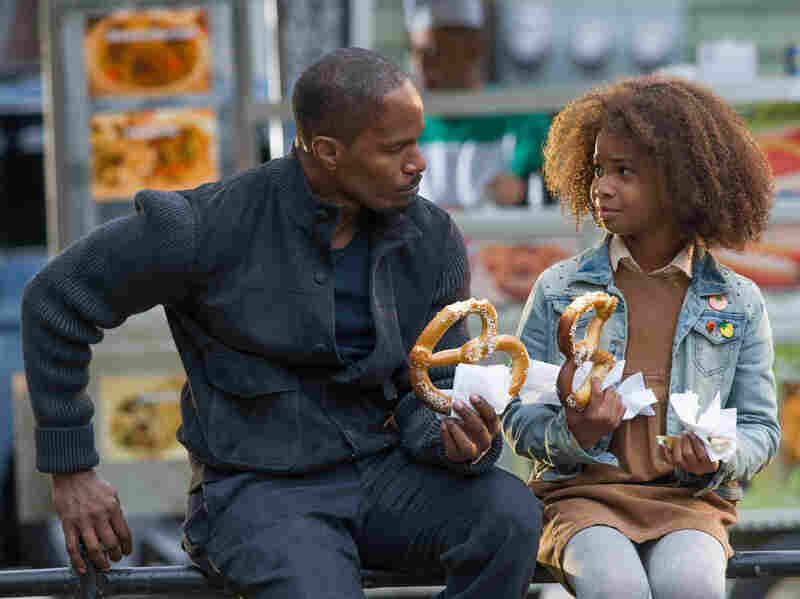 Jamie Foxx and Quvenzhane Wallis star in the latest incarnation of the musical Annie.

The sun'll come out tomorrow
Bet your bottom dollar that tomorrow, there'll be sun

There is a thing that happens with songs where, when you've heard them enough times, you stop hearing them at all. They are less pieces of music than cultural baubles that pop up to stand for styles or sentiments or eras. Long ago, "Tomorrow" became not just the song that stood for Annie, but for many people — both those who like musicals and those who don't — a song that stood for precocious children belting earnestly to the patient exhaustion of nearby adults. Consider the scene in Nora Ephron's You've Got Mail where the wealthy family of Joe Fox (Tom Hanks) listens to its charming preteen sing the song with nervous, imperfect happiness. It's not just a song; it's an anthem of young girls with big voices, and young girls with small voices who dream of having big voices.

I was 6 years old when Annie opened on Broadway in 1977. I was in the sweet spot: a generation in which a lot of girls took that music to heart — "Tomorrow" and "Maybe" and "Hard-Knock Life." We had the cast album, and I knew all the words, and I still do, because that's how it works. I can't remember TV shows that aired in 2012, but if I play "You're Never Fully Dressed Without a Smile" in the car, my mind and my voice retrieve it intact, like a warm blanket from a cedar trunk. I didn't even know what a lot of these words meant then — "Who cares what they're wearing on Main Street or Saville Row?" — but they're in there anyway.

It would never have occurred to me at that age that I might have more easily seen myself in that record, that show, that iconic image of the little girl with the big voice, because like practically every little girl I saw in popular culture, she was white. The original musical Annie is a period piece set during the Great Depression, but aside from the one scene where she put on the fluffy red hair, the Annie in the photos I saw looked a lot like me. Don't get me wrong — plenty of little girls loved Annie who weren't white, and plenty of boys loved Annie, and so forth. But when you're a little kid, it doesn't hurt to have commonality with the people being presented to you as cultural icons. Or maybe it's better to say it can hurt, I think, to almost never have it.

There is already a perfectly good filmed version of Annie that's charming, straightforward, well-executed, and quite faithful to the original musical, if that's what you're after. It's not the 1982 film directed by John Huston — that one is pretty bad. It's the 1999 version made for television, starring Victor Garber as Daddy Warbucks, Audra McDonald as Grace, Kathy Bates as the mean Miss Hannigan, Alan Cumming and Kristin Chenoweth as her rotten brother and his girlfriend, and Alicia Morton as Annie. (Note: It was directed by Rob Marshall, whose Into the Woods is about to open.) That is a good production, and we don't necessarily need another along those lines.

The new film is not along those lines; it is pretty radically different. Directed by Will Gluck, it stars Quvenzhane Wallis as Annie, Jamie Foxx as Warbucks replacement and tech mogul/mayoral candidate Will Stacks, Rose Byrne as Grace, Bobby Cannavale as a political consultant who functionally takes the place of Rooster, and Cameron Diaz as Miss Hannigan. It's been doubly updated: The musical was a 1977 piece about 1933; this is a 2014 piece about 2014. Here, Annie is not living in an "orphanage," per se, but in a crowded foster home where Hannigan, still an alcoholic and now a refugee from a busted music career, warehouses kids in exchange for meager assistance checks. (Diaz is a hoot, and I had to respect the way the joke about her past in a band pays off with one late joke that seems to justify the entire runner.) When Stacks and Annie have a chance encounter, Cannavale's conniving operator convinces him that taking a foster kid into his home for a while will win him votes.

If you love the original musical, know that this is not that. The music has been largely transformed into sweetened, highly produced modern radio pop, which I personally find enormously less pleasurable than the original songs. Some songs have survived largely intact, particularly the opening trio of "Maybe," "Hard-Knock Life" and "Tomorrow." But beyond that, it's mostly numbers that nod at the original music before veering off into songs that are either entirely new for the film nor so different that you'll barely recognize them. "You're Never Fully Dressed Without a Smile," for instance, is here only as a Sia pop rendition used to score a fantasy scene. The score frequently includes pieces of songs that are never actually heard, as if to reassure the audience that this is not forgetting the show's roots, but specifically acknowledging them and setting them aside. Whether you find that actually reassuring probably has a lot to do with your perspective.

It seems fair to point out, though, that if the new music is vulnerable to the accusation that it sounds too produced and synthetic, the original presentation of Annie on Broadway was vulnerable to musical digs of its own. Certainly, your classical singers would have dropped their teeth at young Andrea McArdle's high belting chest voice, which really does sound at times like it would hurt to sing that way for very long. Returning to the original cast album makes me warmly nostalgic, but also makes me sympathetic to adults who felt at the time that they were listening to entire songs made up of children yelling. We may be in a time of enthusiastic snark, but we did not invent the tsk-tsking of the displeased, particularly in the case of entertainment for children.

Despite any reservations about the music, it is a charming, lovely little movie. Wallis, who was nominated for an Oscar for Beasts of the Southern Wild, remains a naturally affecting young actress, and her Annie retains the ingenuity and resilience that is more important to the character, in the end, than the Depression setting and the red hair. What has always been most poignant to me about Annie was her conviction, deep and real, that her parents were gone only temporarily and would return for her. And the film's way of conveying that, which takes Annie back over and over to the only place she can think of to wait for them, is quite touching.

What they do with Jamie Foxx as a germophobic entrepreneur (he's quite funny) is necessarily different from the model of Daddy Warbucks, old-school rich dude. But there are interesting trade-offs that come out of the updating process. While I much prefer the original's "N.Y.C." to the new film's "The City Is Yours" when it comes to songs about the draw of New York, the song isn't the only thing about that scene that changes here. In the original, "N.Y.C." is a comfortable rich man's salute to the city he loves, sung as he wanders through it: "The city's bright as a penny arcade; it blinks, it tilts, it rings." Warbucks represents established royalty; in order to capture New York's appeal to strivers, they throw in a verse from an aspiring actress: "N.Y.C., tomorrow a penthouse that's way up high; tonight, the Y."

Here, "The City Is Yours," on the other hand, finds a black billionaire in his helicopter arguing the city's promise to a young black foster kid: "Now's the time you've gotta stand tough; 'cause if you work hard, you can rise up." Life is, of course, not that simple. But while I don't love the new song, that new dynamic between the characters is perhaps more interesting and relevant than revisiting the New Deal would have been. (The original show actually features FDR making the Cabinet sing "Tomorrow" and has a song called "A New Deal for Christmas," which is literally about ... the New Deal.) Stacks is sort of both Warbucks and the actress in that sequence — speaking to both the dream and the hustle it takes to get it. He is having a more substantive conversation with Annie than comes out of just showering a kid with stuff. "Rise up." "Stand tough." There's a consciousness in that scene of the odds Annie is actually facing that's largely missing from the fully fantasy-bound original.

Gluck is a director with a history of making films that are better than they could have been in other hands: 2011's Friends with Benefits, starring Justin Timberlake and Mila Kunis, is a solid contemporary romantic comedy, and 2010's Easy A, with Emma Stone as a high school student dealing with rumors about her sex life, is terrific. I don't think Annie is quite as interesting as either of those, but it's fun, and it's funny.

The endearing thing about "Tomorrow," despite all that's happened to it over the years, is that when you actually listen to it, its ideas are elemental: Most things are not the end of the world. There are chances for things to go better. Hope is real. I could be possessive and sniffy and negative and I could catalog the differences between what I loved more and what I loved less. But every generation deserves its own Annie, pressing that idea that hope is real in whatever way reaches them the best. Different ways at different times, hopefully looking like different little girls. Is it a great movie? No. Am I glad they made it, and did I enjoy it? Yes.