Accessibility links
At One Retirement Home, Residents Run A TV Channel The show must go on, as they say in the business. That's especially true at one Los Angeles retirement community, where old industry pros keep busy by producing TV shows for their contemporaries. 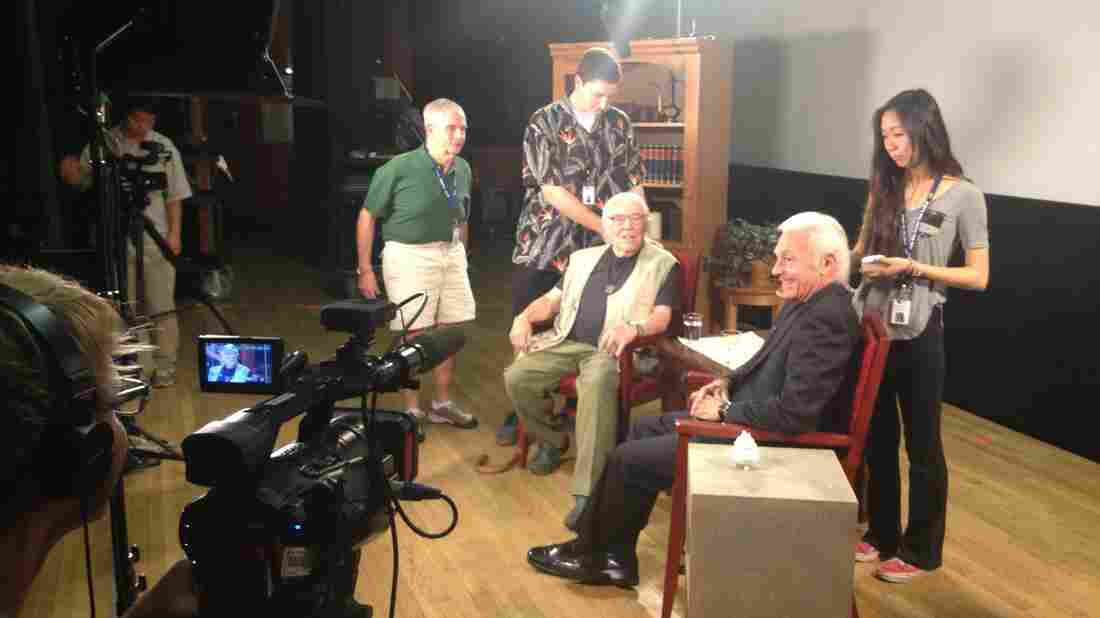 On the set of Behind the Silver Screen, a Channel 22 series that profiles life stories of Hollywood veterans who are Motion Picture and Television Fund residents. Jennifer Clymer /MPTF hide caption 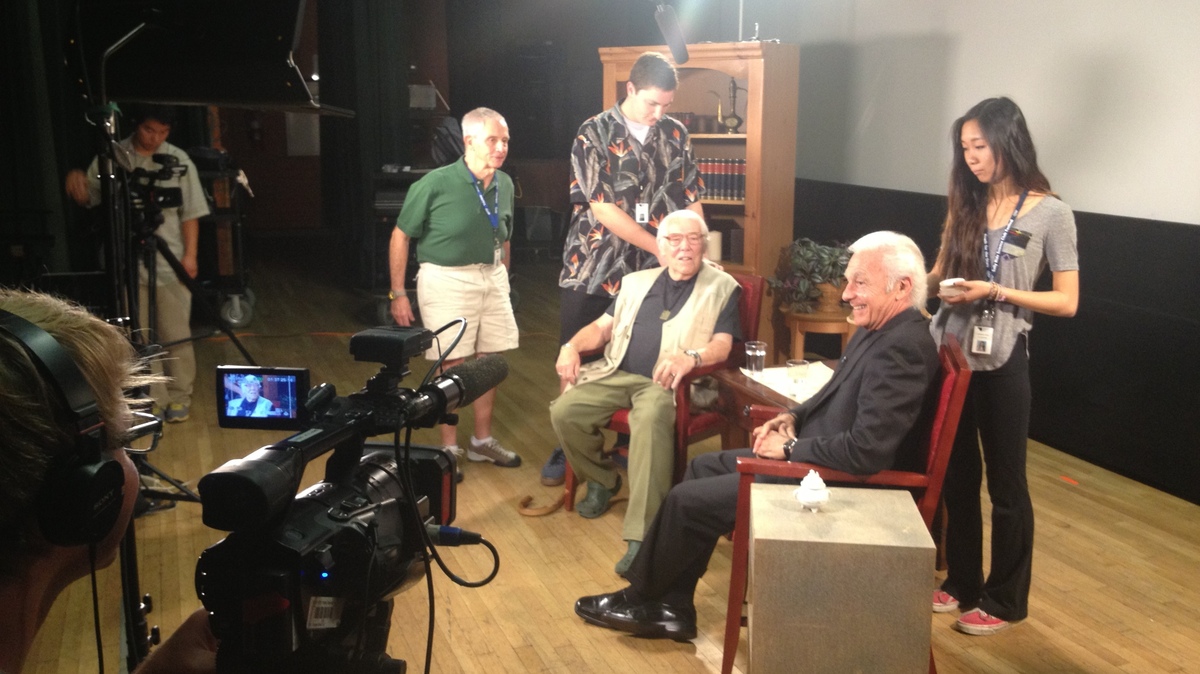 On the set of Behind the Silver Screen, a Channel 22 series that profiles life stories of Hollywood veterans who are Motion Picture and Television Fund residents.

For many people, being retired means playing golf in Florida or baking in the sunshine in Palm Springs. But at one retirement community in Los Angeles, the most popular activity isn't shuffleboard. It's producing TV shows.

The Wasserman Campus of the Motion Picture and Television Fund is a retirement home for people who worked in the entertainment industry. These actors, producers, editors and other showbiz veterans have credits dating back to the days of live television.

But the residents are still working hard. Channel 22 is the in-house TV station that airs exclusively in this retirement community. It intersperses Hollywood movies and sitcom reruns with original programs created by, written by and starring the retirees who live there. 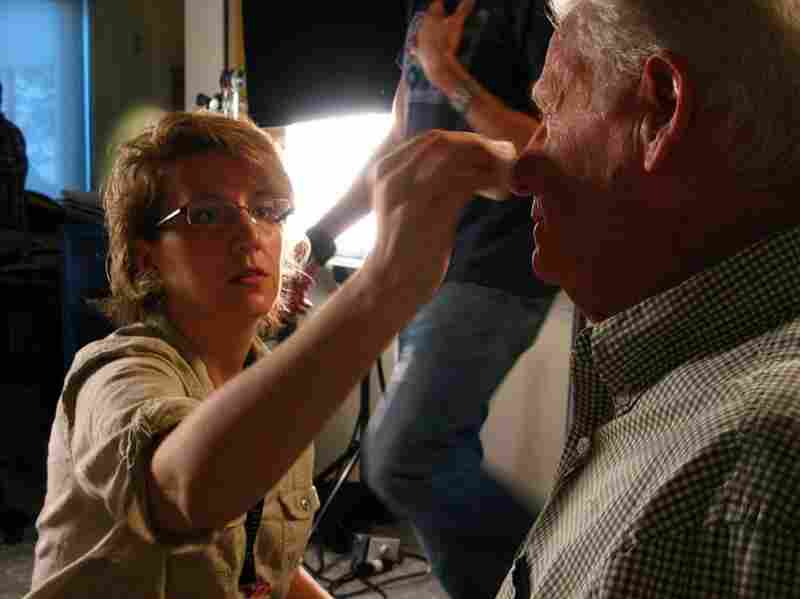 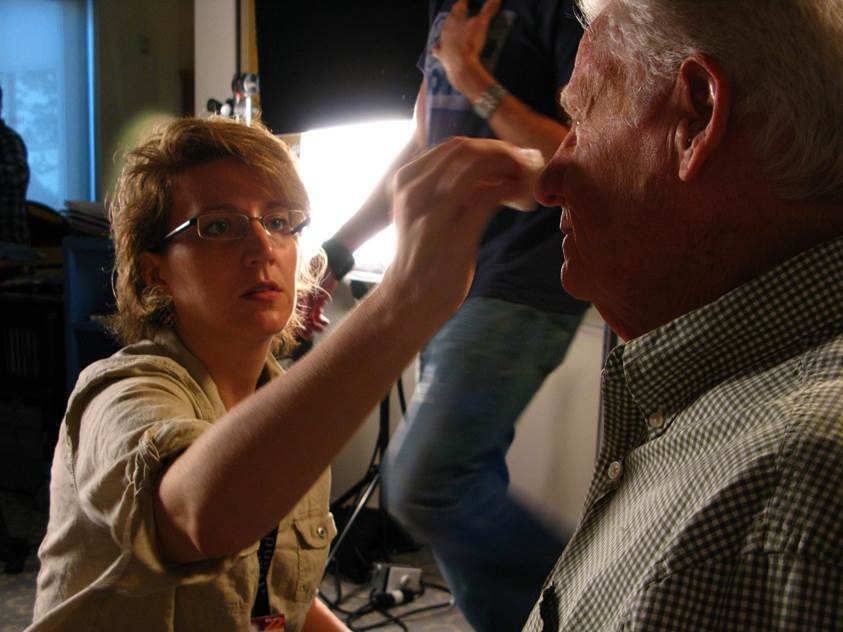 Channel 22 producer Jennifer Clymer applies makeup to radio personality Gene Price before an interview on the show Heart of Hollywood.

About a quarter of the almost 200 active retirees participate in creating programs for the channel, assisted by a small full-time staff and a volunteer crew of local students and industry professionals. Among the shows they create are a comedy series called Law and Disorder, about a fictional Precinct 22 where the cops, victims and perpetrators are all over 80 years old; and a talk show called The Roaring 90s, which is kind of like The View but with women in their 90s.

"It's almost like working with a network, except you don't have to kowtow as much to the network bigwigs," says Irma Kalish, whose husband, Rocky, is a resident at Wasserman.

Irma and Rocky are a husband-and-wife team who wrote scores of episodes of shows like F Troop, My Three Sons and All in the Family. They're about to shoot the latest in a series of short films they've written for Channel 22.

"It's a sketch about two people who live in the same building and what happens to people in a stuck elevator," Rocky says.

The channel has produced over 1,000 hours of programming since it was founded in 2006, all while observing some unusual production constraints, says station manager Jennifer Clymer.

"You've got people who have to make sure that they're hitting their meds on time," Clymer says. "Or if they need a 2 o'clock nap, you get a 2 o'clock nap."

Channel 22 may be one of Los Angeles' smallest working studios, but Clymer has to deal with creative temperaments, egos and insecurities just like every other studio boss.

"Of course we've got divas," she says. "Yeah, we've got strong characters, and I love it. I love it! That's what creativity and passion is about."

Clymer says the residents leave her voice mails after new programs are broadcast.

Bob Beitcher, the CEO of the Motion Picture and Television Fund, says he sees Channel 22 as the kind of creative outlet that can help people live longer.

"I think it gives them a sense of purpose," Beitcher says. "People never get tired of seeing themselves or their names on-screen and having someone come up and say, 'I saw your show the other night. It was really cool.' "

Program manager Anne Faulkner schedules the shows on the station. At 84, she's also a working actress with no plans to quit.

"When you come in here you would think, 'Oh, these are old people, and they're retired. Their life's over,' " she says. "This is a place you can come and still amount to something."

Faulkner had to cut off the interview there. She had to get to a table read for a show called Getting On, an HBO series set in a geriatric hospital in which she has a recurring role. And she says she's still auditioning.