Accessibility links
Book Review: 'Fairy Tales,' By Hans Christian Andersen | This week we celebrated not only Christmas, but also the solstice — the shortest day of the year. In honor of this wintry weather, author Edward Carey recommends his favorite winter fairy tale. 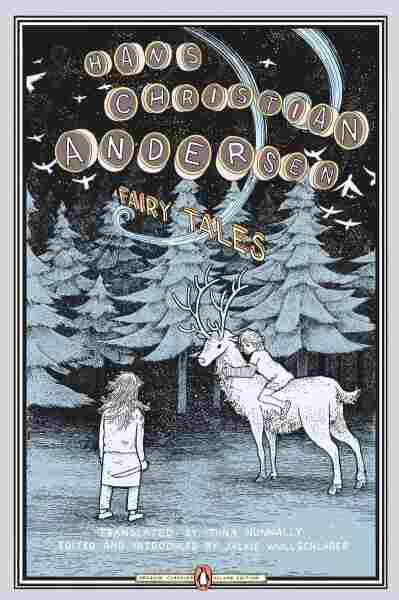 It's my favorite of the Hans Christian Andersen fairy tales. It's also the strangest, and the one he wrote the fastest — in a rare burst of inspiration.

It's "The Snow Queen" — a tale that took just five days to create.

You can feel Andersen's excitement in the writing.

"All right! Now let's begin," he starts, "When we reach the end of the story, we'll know more than we know now, because there was an evil troll."

The plot is this: Little Gerda's dearest friend Kai has been kidnapped by the Snow Queen. So Gerda, all alone, sets out to find him. During her journey the world edges from spring towards winter. The nights grow longer, the weather colder and crueler. At first the swirling snow drifts are described as bees — later, they become battalions.

At last Gerda arrives at the Snow Queen's palace, which is built of "drifting snow" beneath the northern lights. The windows and doors are made of "razor sharp winds." The land is cold and barren. But Gerda's breath forms little angels who "pierced the snowflakes ... and [she] walked fearlessly and undauntedly through them."

Finally, Gerda rescues Kai, bringing a little warmth back to his frozen form, and they journey home together. Color returns to the story, and it's spring again and then summer. The children reach their old home to find that they're taller. They're adults now.

"The Snow Queen" is the perfect example of the wonderful weirdness and originality of Andersen's voice, the perfect winter's tale. It's the only story I know that promises everything we hope for in this season: "I will give you the whole world," the Snow Queen says to Kai, "and a new pair of skates."

Edward Carey is the author of Heap House.