Accessibility links
Getting High Safely: Aspen Launches Marijuana Education Campaign Authorities in the Colorado city have distributed brochures on the do's and don'ts of marijuana use. They list facts such as where pot is legal and how long the high takes to set in. 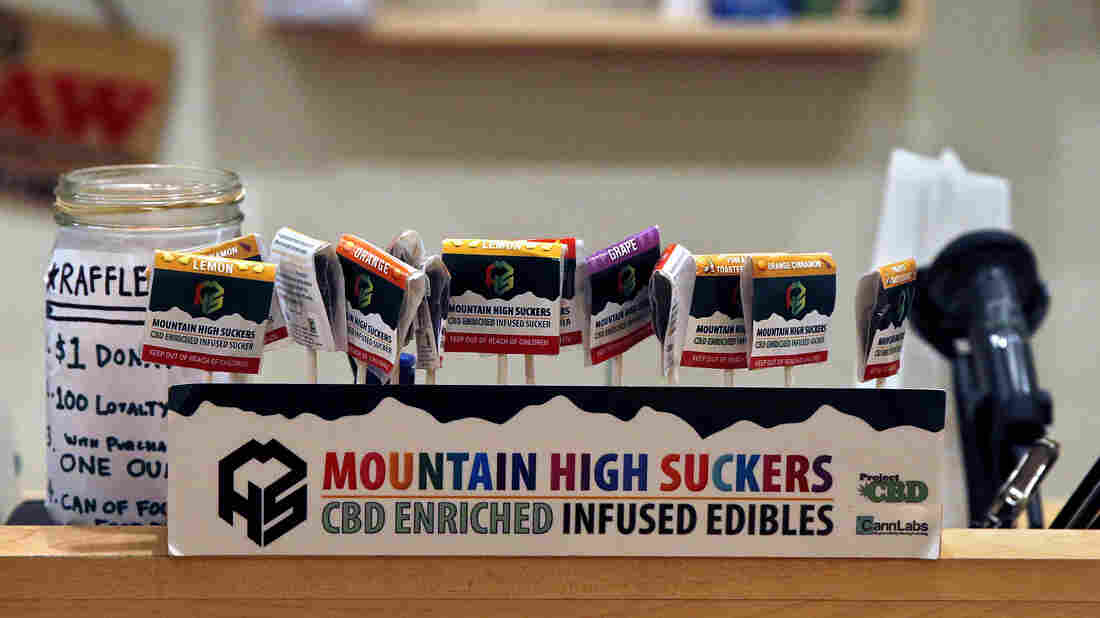 Marijuana-infused lollipops are displayed at a dispensary in Denver in 2013. Aspen, Colo., recently launched a marijuana education campaign to teach visitors how to use the drug safely. Brennan Linsley/AP hide caption 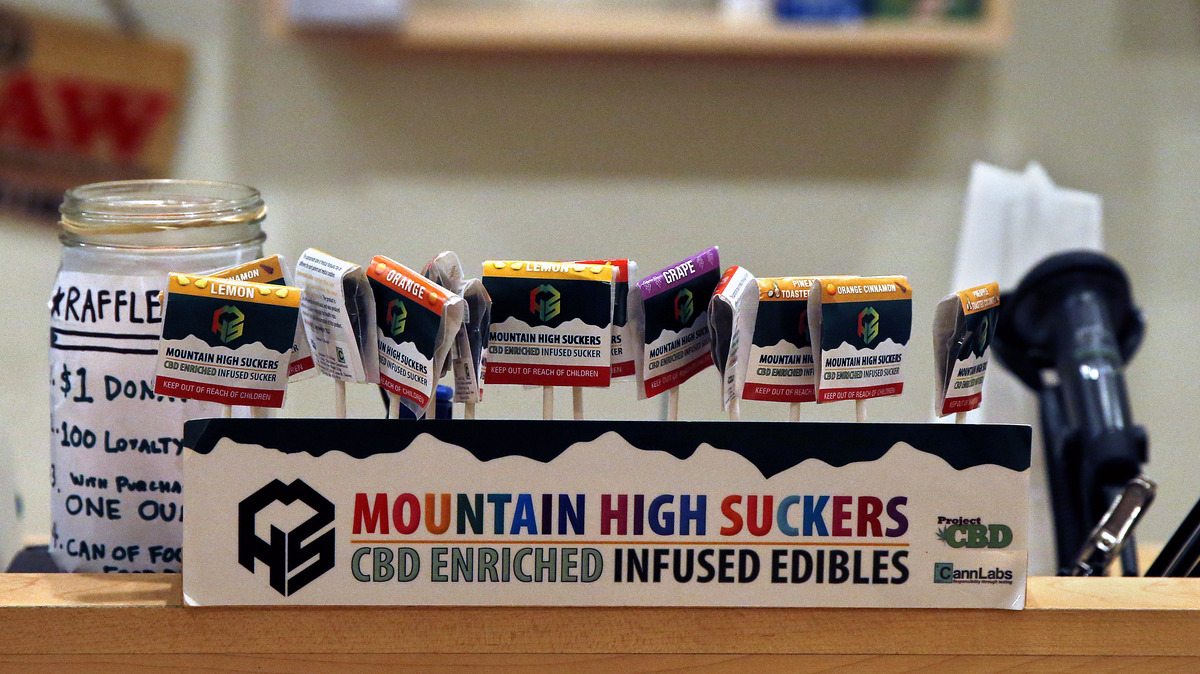 Marijuana-infused lollipops are displayed at a dispensary in Denver in 2013. Aspen, Colo., recently launched a marijuana education campaign to teach visitors how to use the drug safely.

The state government and the marijuana industry in Colorado are working to educate people about how to use pot safely. But in the high Rockies, one community is taking matters into its own hands.

The local sheriff in Aspen is leading an education effort that targets skiers and snowboarders flocking to the winter resort. And the sheriff isn't waiting until visitors hit the slopes — their education starts at the airport with pamphlets on marijuana.

"It's the brochure rack, and it has information on everything from trails on the ski areas to a day at the Aspen Club and, now, the local guide to retail marijuana," says Pat Bingham, a spokesperson for the airport.

She says the brochure on legalized pot isn't all that popular. 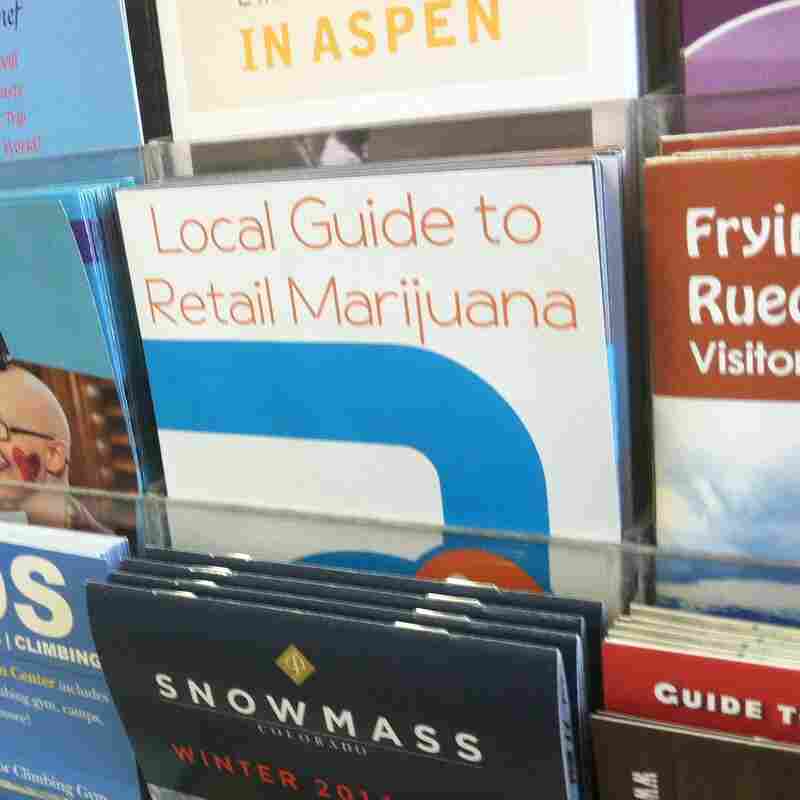 Officials in Aspen have put out a brochure on how to use marijuana safely and legally. Marci Krivonen hide caption 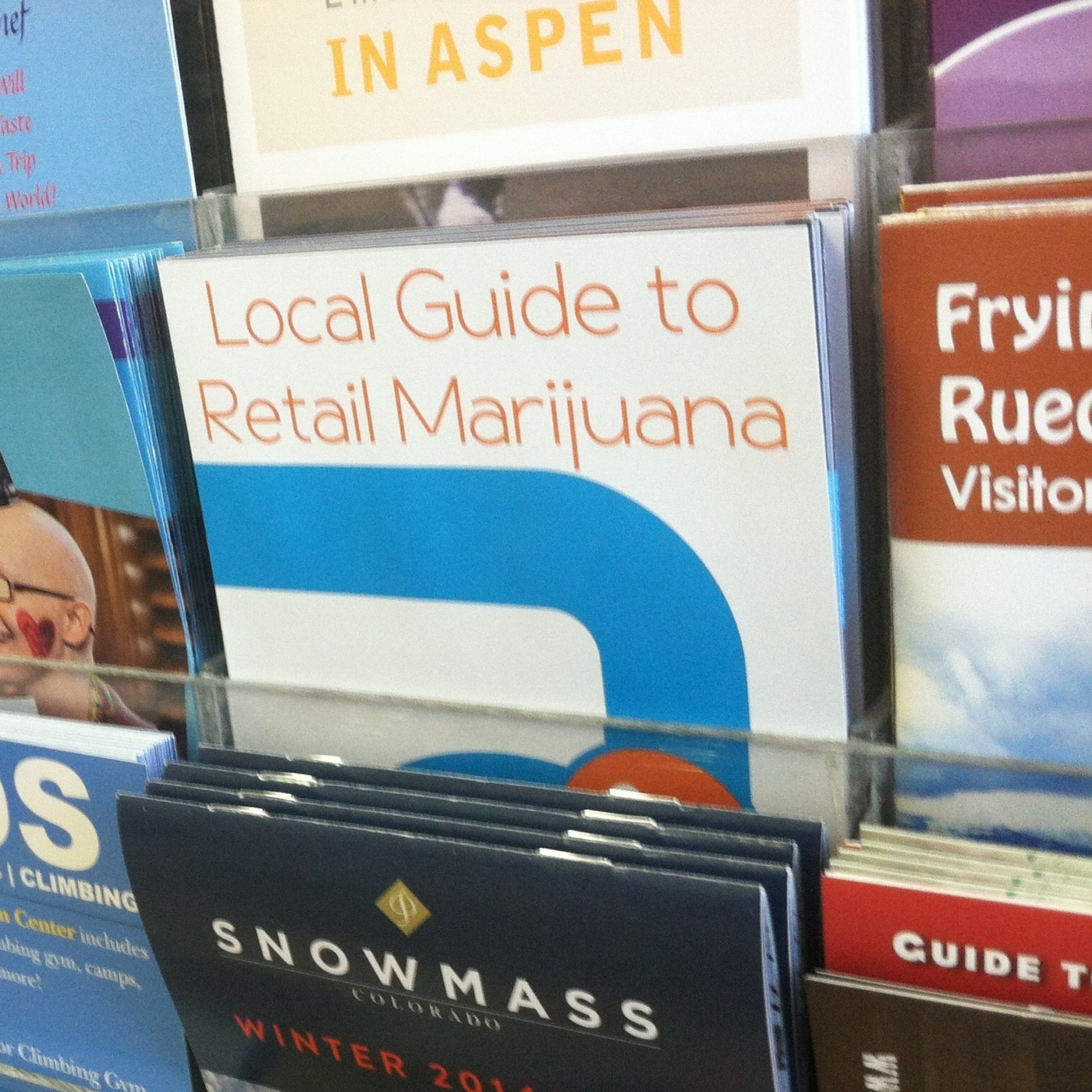 Officials in Aspen have put out a brochure on how to use marijuana safely and legally.

"We haven't had to refill this thing, I don't think, once yet, but our busy season is yet to come," she says.

The pamphlet is an attempt by the community to educate tourists about marijuana. It lists how much a person is allowed to have, where it's legal to consume and how long the high takes to set in.

"These are probably the most frequently asked questions, that's what this is," says Joe DiSalvo, the sheriff in Aspen.

After voters approved legalizing marijuana in 2012, he formed a coalition with the hospital, the local school district and the business community.

"When that happened we all agreed that, although we may not all agree on the legalization of marijuana, we do agree that we have to roll this out real responsibly with a heavy, heavy, heavy educational campaign," DiSalvo says.

The result of that campaign is the pamphlets, and 10,000 of them are located throughout town. Warren Klug has a pile of them at the hotel he manages downtown. He's using the pamphlets not for guests but to educate his staff.

His employees are allowed to take home extra food, and he doesn't want them unknowingly consuming marijuana, which has happened at a nearby hotel.

"My concern is for our employees who may see the edible marijuana products on kitchen counters and left with other foodstuffs, and there may be some confusion because these items look so much like regular candies," Klug says.

Erik Klanderud, director of member services at the Aspen Chamber, has been fielding questions from visitors ever since marijuana stores opened in Aspen.

"It's been interesting," he says. "I talked to a guest service team yesterday. They are getting questions more about where are the shops. And it's not necessarily that they're going in there and shopping. People are curious."

Back at the airport, Mark Holmann is picking up his luggage at baggage claim. He's visiting Aspen from Michigan to ski. He hasn't yet picked up a brochure, but he says he will.

"To have a better understanding of where the facilities were located," he says, "just to make me a more well-rounded individual in understanding it."

With prime ski season underway, the goal is to get these pamphlets into the hands of those on the slopes and in the lodges.