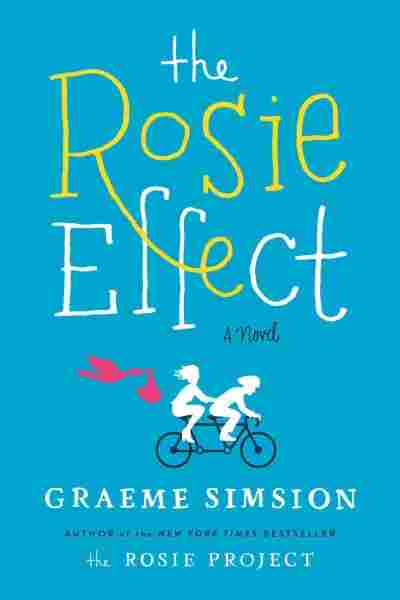 It's not an unfair generalization, I don't think, to say that identification with characters is fundamental to contemporary romantic novels. Most — not all, but most, by the numbers — are written for an audience of women, and they're emotionally centered on the romantic quest of a woman, often accompanied by another quest of some kind for career fulfillment, a peaceful relationship with parents, or the putting aside of past mistakes.

Part of what makes Graeme Simsion's novels, The Rosie Project and now its follow-up, The Rosie Effect, unusual is that while they are, in fact, contemporary love stories that share a lot with books like Bridget Jones' Diary, they complicate that typical identification in two critical ways. First, the first-person narrator is a man, Don Tillman. Second, Don is — by his own description — emotionally atypical. He raises in many minds, including his own, questions about whether he has Asperger's or is otherwise on the autism spectrum, but the books decline to make that diagnostic question their focus. What Simsion does is define Don with good humor and character specificity rather than through any particular pathology.

At the opening of The Rosie Project, published in 2013, Don was a successful scientist living alone with few friends. He didn't consider himself suitable for traditional romance, but he nonetheless set out to find a suitable wife. He met doctoral candidate Rosie Jarman, a free-spirited woman searching for her own family history, and while he considered her entirely unsuitable as a prospective spouse, he tried as a researcher to help her with her quest. Naturally, they wound up falling in love and getting married.

But not entirely naturally, not really — by which I mean, in this case, not easily. Simsion plays as fairly as he can with Don, never making him other than what he's been shown to be. Don will never suddenly become a partner who understands all of Rosie's feelings instinctively; he learns instead to anticipate intellectually what will increase her happiness, and that increases his in return. He will not become a man with good social skills, except for those he acquires by careful and diligent practice and study. He will never be easy with people, he will probably never have lots of close friends, and he will always need those close to him to keep a lookout in a world he sometimes finds tough to navigate. And none of that is going to change, through romance or family or friends, and it would be unfair in a few directions to suggest it will.

We remain with Don, looking out through his eyes at all times, so while Rosie is very much a classic romantic heroine, her feelings — which would normally be the transparent beating heart of the story in its classic version — are tantalizingly opaque for us in the same way they are to him. Whatever fears she has about her unconventional marriage, we know only through what she says and what we know she must feel. We know she knows Don is a good man, she loves the things about him that play to others as weird, and she trusts him. But we are held at a distance from her a little, and it's the same distance Don struggles to bridge. It's love; its ways are a little mysterious, and the Rosie and Don books convey that better than most.

Of course, it is one thing to marry an unconventional partner, and it is another challenge to have a child with him. In The Rosie Effect, this is where Don and Rosie find themselves: unexpectedly pregnant. One of Simsion's particular gifts is allowing Don to explain, as the narrator, actions he's taking that we know, and he does not, could have dire consequences. Readers identify with Don in that we see through his eyes, but we identify with Rosie because what we watch him do, we receive largely as she does, with fascination and sometimes bafflement. What results is no less than classic Hitchcockian suspense, in which we are more aware than Don is of the dangers he's walking into — as when he blithely makes a major life decision for both of them without consulting Rosie and explains the decision to the reader assuming she'll be thrilled. We know her by then, and we know him, and we like them both. But still we wonder, even as he goes about his preparations utterly unconcerned: Will she freak out? Take it in stride? Be touched? Irate?

Simsion has always been able to find a tricky balance with Don, too, where his literal mind can be amusing, his failure to notice sarcasm can be endearing, but he never seems pitiable. And despite the affection it's very easy to feel for the character, there's a real sense of peril in this story. The story is fair to Rosie, too: It's entirely fair for her to wonder whether it's right to ask a child to be comfortable with the kind of closeness she's chosen for herself. It's a question that's not only internal to Rosie but invisible to Don for much of the book, and yet we can tell she is experiencing it. (Simsion is very good at laying down clues as to how Rosie is feeling that Don conveys to us as information but fails to recognize as clues.)

Is it enough, as a parent, to know what will increase a child's happiness and to endeavor to do it, as Don will? Is there something else more basic that he will need to be a good father, and is there any way for him to develop it?

The lovely thing about Don Tillman is that he's a legitimately uncommon character, particularly in a romantic book, and while he's not always easy to understand, he's always easy to feel for. He is decent, he is effortlessly and efficiently selfless in many situations (in fact, he often illustrates that kindness is simple good sense), and his victories — like the making of new friends — are hard-won.

For a chronicler of a love affair to choose to tell the story solely through the eyes of a man who would himself tell you that he has little facility with people and almost no capacity to describe emotion in the abstract is to increase the level of difficulty substantially. That these books are as funny and charming and often touching as they are is a tribute to the skill with which they're written.