Accessibility links
Grasping For Gravitas In 'A Most Violent Year' J.C. Chandor's A Most Violent Year wants to be an elegant statement on the tough truth about making it in America. Instead, it tries to import seriousness it can't back up with substance.

Grasping For Gravitas In 'A Most Violent Year'

Grasping For Gravitas In 'A Most Violent Year' 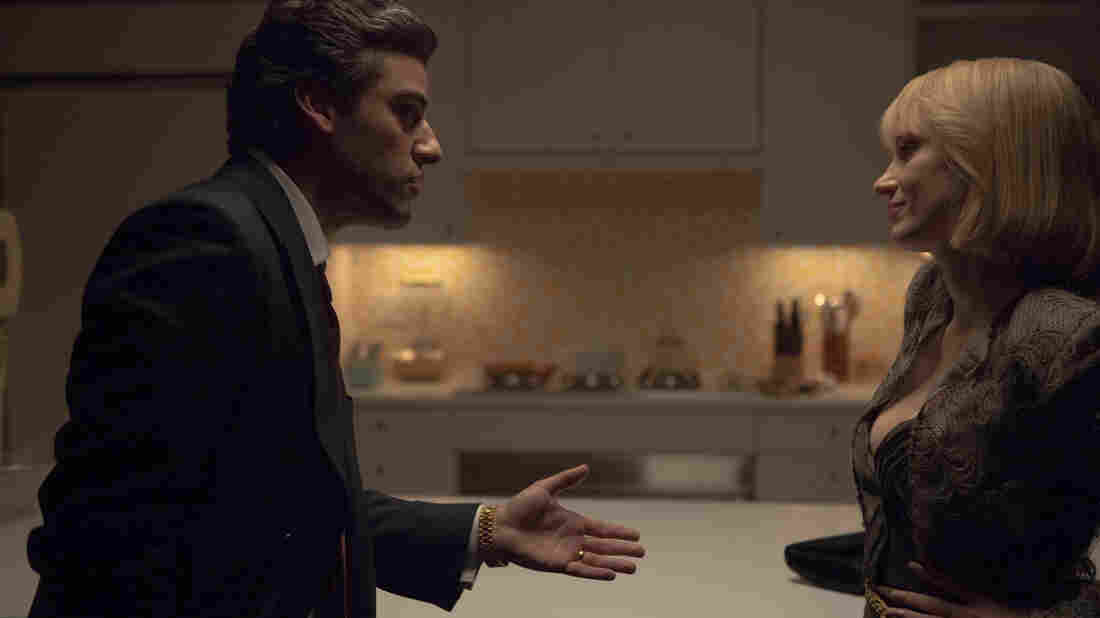 Oscar Isaac and Jessica Chastain star in A Most Violent Year. A24 hide caption 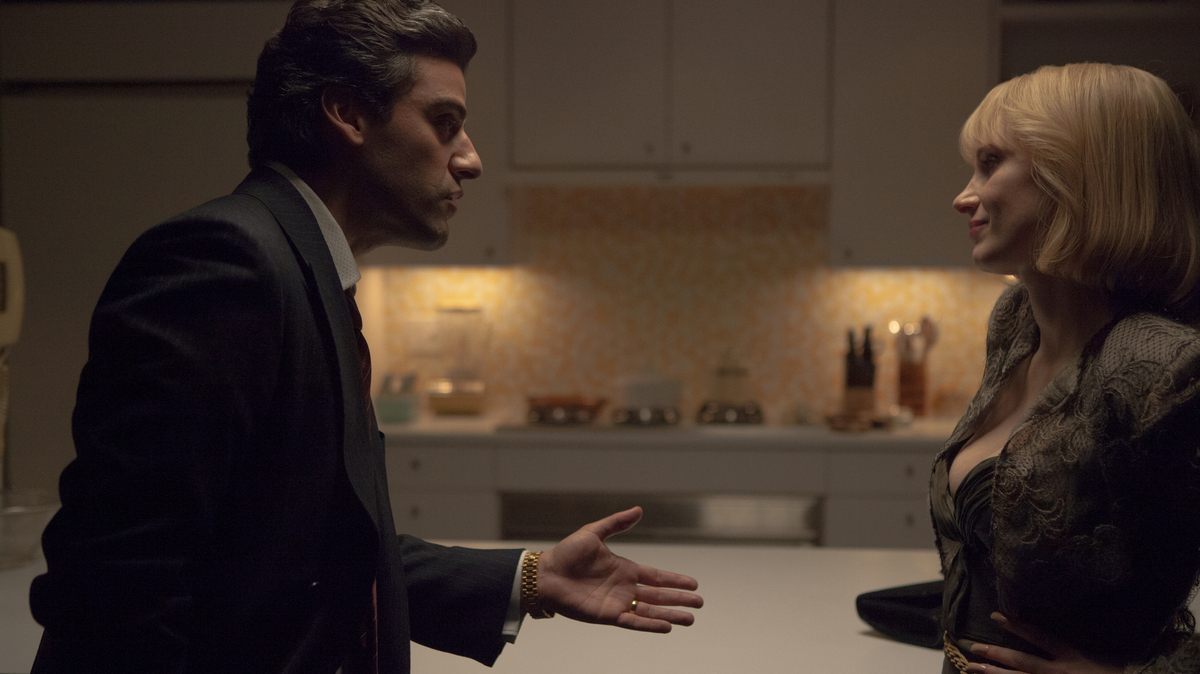 Oscar Isaac and Jessica Chastain star in A Most Violent Year.

J.C. Chandor's A Most Violent Year opens to the tune of Marvin Gaye's "Inner City Blues (Make Me Wanna Holler)." The song plays as Abel (Oscar Isaac) takes a morning run and the trucks at the heart of his ascendant heating oil business begin making deliveries across New York. "This ain't living," Gaye sings, and although the song cuts out before the lines "Crime is increasing/Trigger happy policing," we get a similarly contemporary ring from the newscast that follows right after, which includes a report on the shooting of five cops the night before.

The result is an unintentional timeliness. But the accidental reminder of current social turmoil doesn't elevate and embolden A Most Violent Year as it does Ava DuVernay's Selma. Instead it only further highlights the staleness of the final product.

That's not to say that A Most Violent Year's problems stem only from the accidental relevance of its soundtrack choices. Hearing "Inner City Blues" in the context of Michael Brown and Eric Garner stings a little more than usual, but Chandor's use of the song would be insensitive anyway, because the particular reality that it describes — one centered around poverty, racial inequality and violence — is worlds removed from the story we're about to witness of a heating-oil supplier trying to finalize a million-dollar real estate deal.

Instead, Gaye's song serves only to set a weighty tone, as does the evocation in the movie's title of the fact that 1981, the year in which the film is set, was one of the most violent years on record in New York. That statistic, like the content of "Inner City Blues," has no bearing on A Most Violent Year's actual story. Both, rather, are examples of the labored search for gravitas that's tiresomely repeated throughout Chandor's movie.

A Most Violent Year is Chandor's third film, following two others characterized by constrained settings: 2011's Margin Call took place almost entirely in the offices of an investment firm on the eve of the 2008 financial crisis, while last year's All Is Lost was a nearly dialogue-free survival tale starring only Robert Redford as a nameless, lost-at-sea protagonist.

With A Most Violent Year, Chandor transitions to a more baroque style of filmmaking and, superficially at least, a wider scope of storytelling (Chandor also wrote the screenplay). That again invites comparison to Selma, which is likewise DuVernay's third film and her first to be produced at a grander Hollywood scale. Bradford Young, who has previously worked predominantly on smaller independent films, serves as director of photography on both projects.

In both Selma and A Most Violent Year, you sense the loss that comes with such a shift, the diminished space for individual identity that results from having to service more restrictive plot structures and a preordained visual style. The change is more regrettable in A Most Violent Year, however, because its gangster-drama plot, unlike Selma's civil rights story, has been so often told.

The film begins with Abel and his wife, Anna (Jessica Chastain), putting down their life savings as a deposit on a Brooklyn fuel yard. The purchase would make them kings of the city's heating-oil industry, a prospect that doesn't sit well with their competitors — most of whom are mobsters who try to sabotage Abel and Anna's business by repeatedly stealing their trucks.

Abel and Anna's plan hits a bigger hurdle, though, when word gets out that the district attorney (David Oyelowo — currently getting great reviews in Selma) is about to lay fraud charges on their company. That complicates Abel and Anna's ability to borrow the rest of the money for the fuel yard, which they need to secure in a month or face losing both the property and their sizable deposit.

Having prided himself on running his business according to a strict moral code (no arming drivers, for example, even as truck thefts persist), Abel comes under mounting pressure from Anna to get the money and protect his family by any means necessary. Their conversations to that effect pit the ethically burdened Abel against Anna's Lady Macbeth. When Anna buys a gun and accuses Abel of not being man enough to defend her or their children, he replies by pointing to her clothes and their mansion: "I've given you everything you could possibly ask for."

Just before, in a scene drenched in metaphorical import, Abel hits a deer with his car. Assessing the situation, Anna tells him to "put it out of its misery" before resorting to doing the dirty deed herself.

At every opportunity, A Most Violent Year coasts on similarly timeworn material. Isaac's quiet, determined intensity mines the early Pacino playbook, even if it hides it behind Steve Van Zandt's head of hair. Chastain gets decked out in the low-cut dresses and overdone makeup that so efficiently signal tacky sophistication. Meanwhile, Young, who in Mother of George experimented interestingly with color palette, veers closer here to his work on Ain't Them Bodies Saints. But A Most Violent Year has none of that movie's ravishing extravagance. Instead, its style here could be called utilitarian grandeur: the sepia tone, the low-angle shots, and the slow camera movements are pre-fabricated to give the film the solemnity it so conspicuously strives for.

The precision with which A Most Violent Year is constructed attests to Chandor's, Isaac's and Chastain's talents, but ultimately their efforts are directed toward little more than a work of mimicry, behind which there's nothing to countenance the air of sophistication that the movie puts on from the start. The "Inner City Blues" opening is just one way that Chandor declares his intentions to give us an insight into the complex ethics of doing business in New York, to tackle heady themes like the corruption that created and holds up this thing called America. The edifice, though, crumbles at first inspection. It bears all the hallmarks of depth except for actual wisdom.