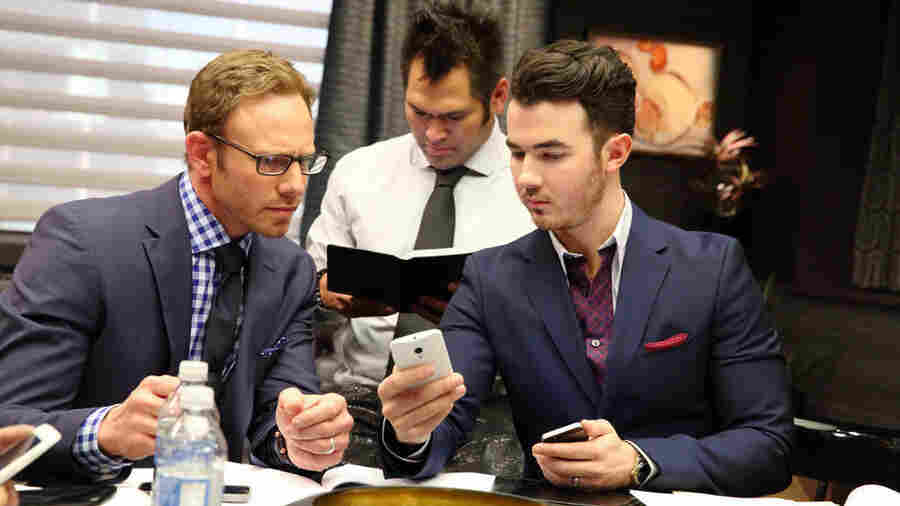 Yup. That's Ian Ziering, Johnny Damon, and Kevin Jonas on The Celebrity Apprentice. And in the spirit of this dopey show, somebody using his phone. Douglas Gorenstein/NBC hide caption 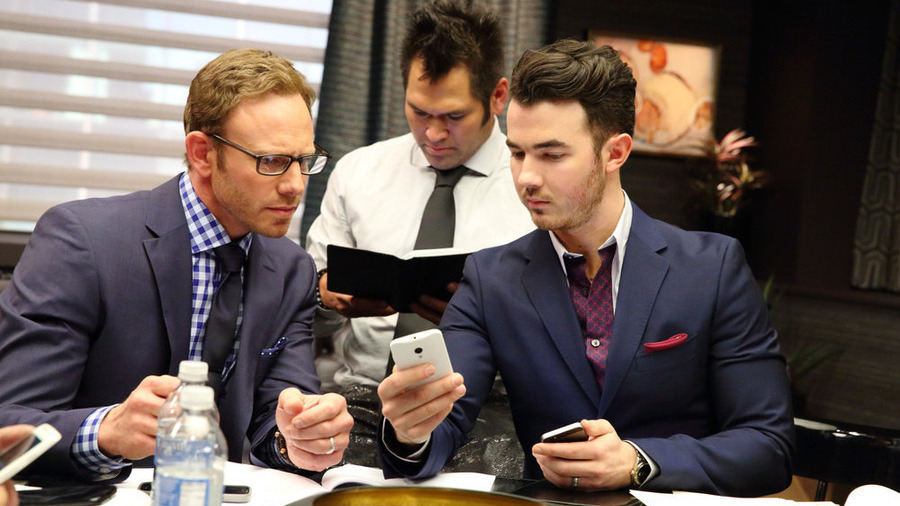 Yup. That's Ian Ziering, Johnny Damon, and Kevin Jonas on The Celebrity Apprentice. And in the spirit of this dopey show, somebody using his phone.

It's hard to remember that The Apprentice was sort of fun once.

In January 2004 when it premiered, it was sold as a proving ground for hustlers (in the "those with hustle" sense) and fierce competitors who knew how to make deals, sell stuff and manage others. It was scrappy, nasty Mark Burnett genius to take the dishy competition that was already a success on shows like producer Burnett's Survivor and the well-liked The Amazing Race and apply it to the real American gladiators: people in suits who could give you finger guns with two hands and still have one left to reach for your wallet. The ultimate prize was to win a job with Donald Trump, whom comedian John Mulaney has rather brilliantly tagged as "what a hobo imagines a rich man to be." ("I'm gonna put up tall buildin's with my name on 'em! I'll have fine golden hair and a TV show where I fire people with my children!")

A progression from the simple to the grotesque is a classic reality-show story, and this show is no exception. The first challenge the show ever presented was easy enough for a child to understand (or participate in): sell lemonade on the streets of New York, with the win going to whoever made more money. The story — as the show told it — was that the women (the teams were divided by gender) sold lemonade by giving away kisses, and they greatly outsold the guys, who set up their lemonade stand all the way down by, if I recall correctly, South Street Seaport and had no foot traffic. That's what the season was like: little stories about decisions that did or didn't pay off. Whether to use sex in an ad, how to get a low price on a purchase, how shady your business ethics should be, how to outmaneuver your opponents – these were the story points. It was also edited with the wit and the wink that accompanied a lot of reality shows early in their lives. It was trashy, in its way, but it was also kind of fun and very addictive.

It burned hot, ratings-wise, but cooled – as almost everything eventually does – until, after the sixth season, they switched over to Celebrity Apprentice (with one ill-fated attempt to return to the regular format), and that was the death of fun.

Naturally, you couldn't have celebrities competing for themselves, nor could they compete for a job – even a doofy PR job like the ones previous winners reportedly ended up being given – with Trump. So they competed for charity, and it became a fundraising contest. As it turns out, fundraising contests are good for the soul, but about as much fun to watch as a water-evaporation competition between two plastic buckets. The sort-of-famous people immediately discovered that they could get people to pay $100 for a hot dog just so they could buy it from a sort-of-famous person, and even worse, they discovered that they could just hit up other rich/famous people they knew for favors. At that point, it became a show about watching people make phone calls asking often unseen, often unidentified friends to come and, for instance, buy a sandwich for $10,000.

It wasn't Who Can Sell More Lemonade? It was Whose Cell Phone Contacts Have The Highest Net Worth? Its original appeal, the opportunity to love and hate grubby young business types as they tried to prove how slick they were, was replaced by the opportunity to see the opposite: that from the start and forever, it's who you know. Maybe that's a more honest view of life around big money, but it's an immensely duller one.

At the same time, of course, it became more and more of a showcase for Donald Trump. Early on, he sort of lingered at the edges, playing the role of Ultimate Captain Finger Guns, there to preach the gospel of go-getters and the fun of getting in the game. He was there to represent the world of the tacky, gold-plated apartment you yourself might live in one day. He wasn't appealing, but he was sort of a cartoon who'd pop up at the beginning and end. It was like casting Mr. Monopoly to spit out a monologue each week.

As it wore on across ten years – in which Trump began to fancy himself a public truth-teller qualified to opine about world events – his presence grew off-putting, yes, but more important, it grew tiresome. In the kind of inversion that plagues a lot of shows as they age, it began to spend more and more (and more) of its time in the Boardroom. That meant more and more (and more) of the show wasn't lemonade stands and product displays and the mundane tasks that keep people awake at night (they really used to do things like build suspense over when displays would come back from the printer!), but was made up of things like Donald Trump trying to get Star Jones and Nene Leakes to fight with each other.

Some of the seasons have been saved by delightful Greek choruses skilled at calling out the absurdity of the entire premise – Clay Aiken was a terrific one during the season ultimately won by Arsenio Hall. But for the most part, Celebrity Apprentice has become the one thing that cannot be tolerated even by the patient and indulgent people who once were willing to watch high-level scheming over detergent commercials and real estate scuffles: it's stultifyingly boring.

The season that starts on Sunday was filmed early in 2014, and has been sitting ever since. Participants include Kevin Jonas, of the eponymous Brothers; Brandi Glanville, a Real Housewife doing the now-common reality-to-reality shuffle; Terrell Owens, who is sure to be talked up by Trump endlessly, since he loves athletes; Vivica A. Fox, who narrowly missed the opportunity to appear in Celebrity Apprentice and Sharknado 2 in the same year; Geraldo Rivera (mark me: there will be at least one Capone's vault joke); Kenya Moore, another Real Housewife; Gilbert Gottfried (why not?); Kate Gosselin, who is still a thing, apparently; Ian Ziering (also from Sharknado); Jamie Anderson, a snowboarder whose participation probably sounded better a year ago, nearer to the Olympics; Sig Hansen, of Deadliest Catch; Leeza Gibbons, who previously did Dancing With The Stars; Johnny Damon, who used to be a baseball player; Keshia Knight Pulliam, who is probably glad this filmed a long time ago; Lorenzo Lamas, who is also still a thing; and Shawn Johnson, another Olympic medalist and another Dancing With The Stars alum.

Who among those people would you sit down to watch on purpose, making phone calls? It was one thing when celebrity shows like this were for people you hadn't seen in high-profile projects in a while, like going to the weirdest high school reunion of all time. But these are basically people who have already been in many cases overexposed relative to how interesting they are, starring in a show that happened almost a year ago, built around a guy who hasn't been any fun to watch since the second Bush administration.

One of the dangers in throwing everything into one bucket – in this case, declaring all reality-competition shows to be a single undifferentiated landfill of garbage – is that nobody says anything when they get much, much worse. This was always a silly show, and it always featured plenty of weird dopes and it's always been in extremely bad taste much of the time. But darn it, it used to be fun. Sort of. It used to be a particular kind of fun. And now it's not.

Come back, stupid lemonade stand posturing. I miss you so.