Accessibility links
Book Review: 'A Sound of Thunder and Other Stories,' By Ray Bradbury | We saw a lot of dystopias in both films and books this year. Author Jason Sheehan has had enough. He plans to celebrate the new year with some science fiction that's actually hopeful about the future. 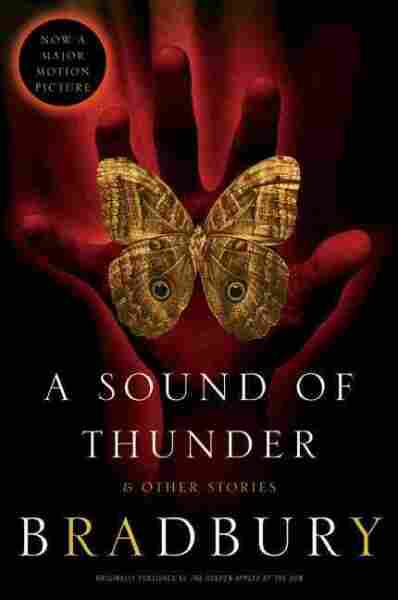 A Sound of Thunder and Other Stories

Title
A Sound of Thunder and Other Stories
Author
Ray Bradbury

I have had enough of dystopias.

Don't get me wrong here. I love a good vision of destruction — to stand at some safe distance and watch the world burn. I have an affection for zombies, have stared down plagues, have, through pulp and pixel, seen this world brought low in any number of ways and, no lie, enjoyed it.

But here I am, sitting on the cusp of a new year, knowing already the evil and sadness that has passed and fully expecting more to come. And I'm wondering if this obsession in our fiction with our own inevitable destruction hasn't reached a saturation point. I'm wondering what ever happened to Ray Bradbury.

Ray was the Man. A grandfather of dystopias, true, who set the nation ablaze with Fahrenheit 451. But he was also our loopy, sideways-smiling prophet who could show you dinosaurs and time machines, spaceships and sea monsters and all the wonders of a future I'm still hoping will come true.

He wrote a kind of science fiction we don't see much anymore — fun but not childish, serious but not miserable, optimistic but not schmaltzy.

Okay, sometimes schmaltzy. He was, perhaps, a bit overly fond of his fantasies of bucolic childhoods. But that colored him in a way that he brought forward as an enthusiasm for exploration, for the fantastic possibilities of life.

He wrote, in his time, a lot of books. Ten times as many short stories. Scripts and poems and, for all I know, grocery lists that were more elegant and more lovely than the masterworks of most writers working today. But of all his collections, A Sound Of Thunder and Other Stories (once known, in a different format, as The Golden Apples of the Sun) is the one that I want to carry with me on into this new year. In it are both sides of Ray — from Bradbury the Destructor, smashing worlds and mucking up timelines, to that barefoot kid lying on his back in the summer grass and staring, entranced, up into the stars. He hunts dinosaurs here, and builds space stations and skewers us, from 50 years distant, for the constant noise of our socially networked and overstimulated culture.

But mostly, he sings about the possibility and the promise of the future because, to him, it was all right there. Because tomorrow was the future and the future was inarguably awesome.

Listen to this, from his story, The End Of The Beginning:

"Tonight, he thought, even if we fail with this first, we'll send a second and a third ship and move on out to all the planets and later, all the stars. We'll just keep going until the big words like immortal and forever take on meaning. Big words, yes, that's what we want. Continuity. Since our tongues first moved in our mouths we've asked, What does it all mean? No other question made sense, with death breathing down our necks. But just let us settle in on ten thousand worlds spinning around ten thousand alien suns and the question will fade away. Man will be endless and infinite."

That's Ray at his crazy, buoyant, hopeful best. And that music, rather than the crackle of fire or the moans of the undead, is what I want to hear more of now as we all step forward into our own futures.

Read an excerpt of A Sound of Thunder and Other Stories