Accessibility links
Weapon Of Choice: Why The Stratocaster Survives When an instrument sounds as good playing Daft Punk as it does Lawrence Welk, you know it's got something. The Strat just turned 60, but it's barely aged a day. 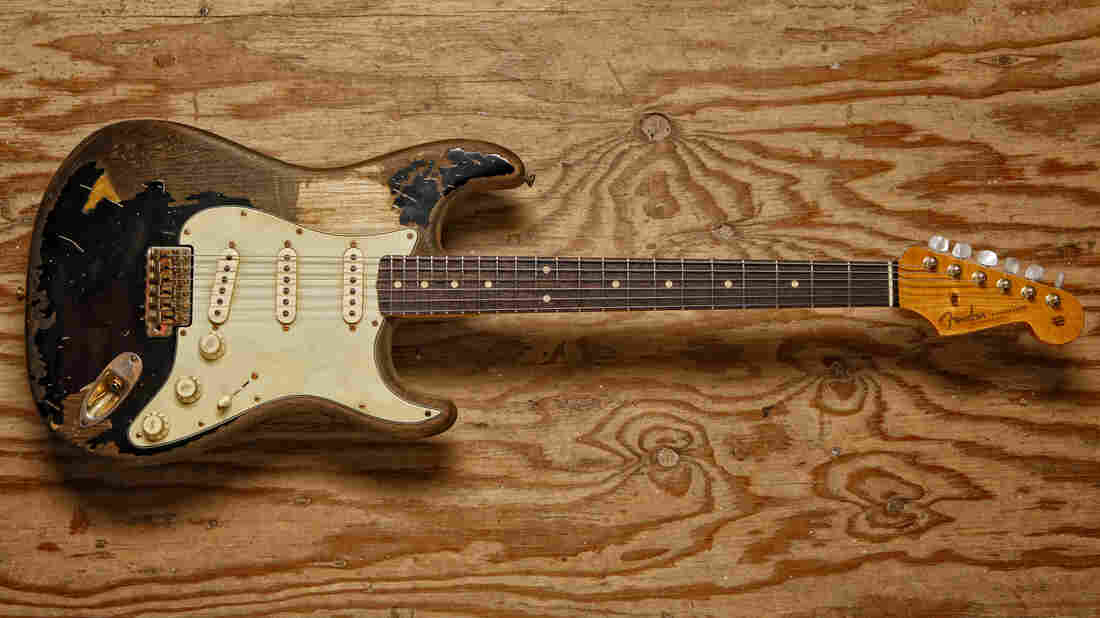 Across six decades, the combination of innovative design and talented players has helped the Stratocaster not only persevere, but rule. John Mayer had the Fender Custom Shop design this one in 2009. Fender Musical Instruments hide caption 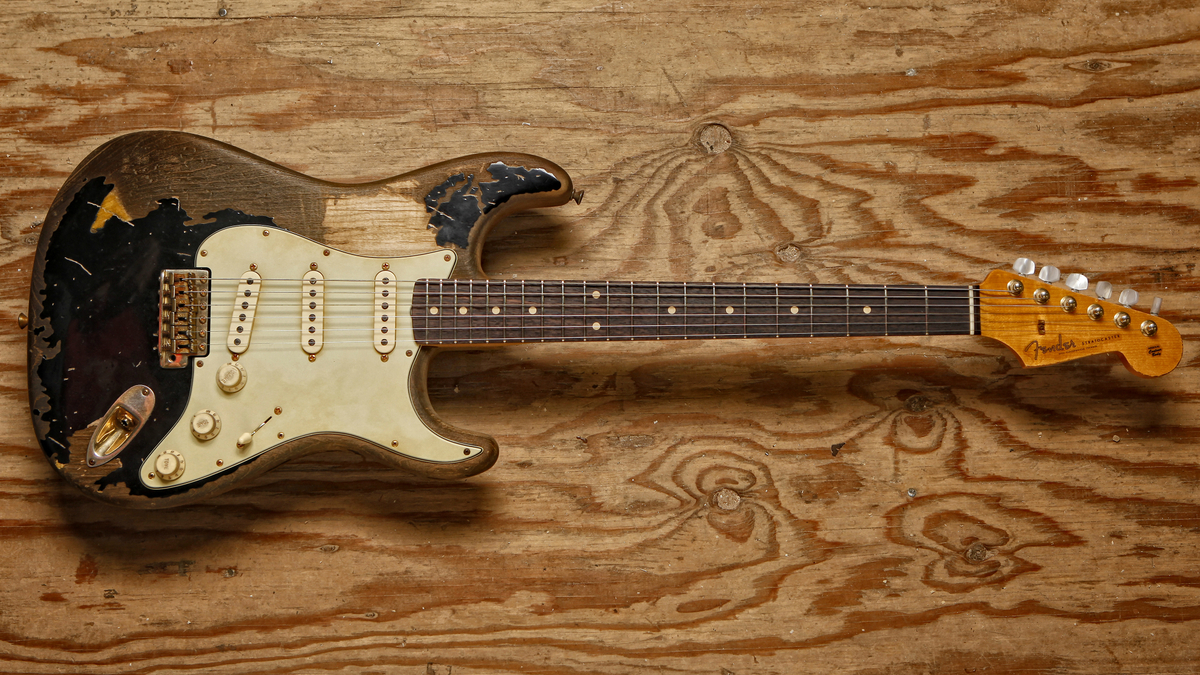 Across six decades, the combination of innovative design and talented players has helped the Stratocaster not only persevere, but rule. John Mayer had the Fender Custom Shop design this one in 2009.

Quick: Name an American product that's had a worldwide impact, is more popular than ever, yet still looks the same as it did when it was introduced more than a half-century ago? Here's a hint: It might be the only musical instrument whose fame rivals that of the people who've played it.

The Fender Stratocaster turned 60 last year. When it came out of the factory in 1954, it didn't sound — or look — like any other guitar. Leo Fender's small company was looking to improve the Telecaster, its groundbreaking solid-body electric, first introduced three years earlier. But far more than a tweak here or there, Fender created an entirely new instrument that's become almost synonymous with the phrase "electric guitar." 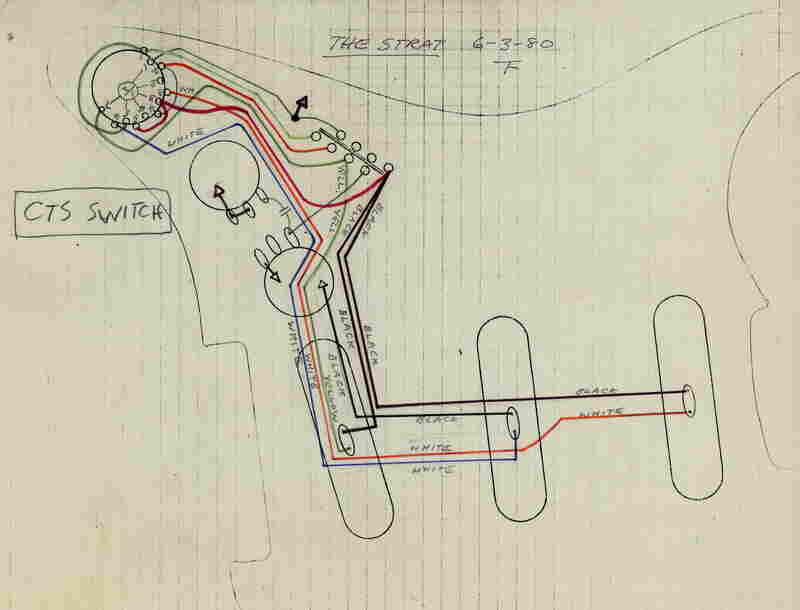 An in-house diagram from 1980 shows how the Stratocaster is wired to switch between its three pickups. Courtesy of Fender Musical Instruments hide caption

"If you were gonna draw an electric guitar from your mind's eye, most people would draw a Stratocaster as the shape," says Justin Norvell, Fender's Vice President of Marketing. "But the thing that connects people to that guitar and that shape is the music they grew up on."

The Stratocaster had a distinctive voice thanks in part to its three pickups, the wire-coiled magnets that transmit string vibrations to the amplifier. Most electric guitars at that time had one or two. Fender also designed a new vibrato — the metal arm at the end of the strings that allows player to vary their pitch.

With those features and that supersonic, solid body shape, you'd think the guitar would have flown out of music stores. But Richard Smith, an author and the curator of the Fender Collection at the Fullerton Museum Center in California, says it wasn't an easy sell.

"It was so radically different in so many ways," Smith says. "It's important to note that it wasn't really that popular initially."

Stratocasters hit stores in Spring 1954, but the first didn't sell until that summer. Leo Fender himself had given early models to country-western swing guitarists for their input. But something new was brewing across the country when the Stratocaster was introduced.

Web Extra: Inside The Strat Factory

Way back when the Stratocaster turned 40, Weekend Edition visited Fender's Custom Shop in Corona, Calif. and learned how the guitar got its distinctive shape. Hear the full 18-minute piece from 1994.

The Strat wasn't just for rock or country players, though. "We can't understate, I don't think, the versatility of an instrument that was adopted by the guitar players with both Lawrence Welk and Pink Floyd," says writer Tom Wheeler.

Wheeler is the author of The Fender Archives and several other books about the company and its products, and says the guitar caught on all over the musical map. One of keys to the Stratocaster's success was the way Fender advertised it.

"In other companies' catalogs you would see professional players, wearing a business suit and wingtip shoes or whatever, sitting on a stool in a studio, playing an expensive guitar," Wheeler says. Open a Fender catalog from the '60s, though, and you'd see "girls in bikinis and guys in board shorts, with surfboards in the background, sitting around a campfire."

Fender doesn't really know how many Strats have been produced since that first one sold in the summer of 1954, but the company does say the Stratocaster is the foundation of its business. Through six decades of musical, technological and cultural change, an innovative design in the hands of talented players has helped the Strat not only persevere, but rule. Think of the names: Eric Clapton, Jeff Beck, Stevie Ray Vaughan, and, of course, Jimi Hendrix.

"That's just probably the greatest 22 minutes, or whatever the hell that is, of Strat in history," says Nils Lofgren, talking about side 4 of the Hendrix album Electric Ladyland. Lofgren himself switched to a Strat early in his career. Today, he's Bruce Springsteen's longtime guitar player and a member of the Rock and Roll Hall of Fame.

"You know, there's just so many great guitars," Lofgren says. "But for me, iconically and just practically, if somebody gave me one choice I'd pick up the Strat to walk out in front of any audience."

Now that's a birthday compliment any 60-year old would appreciate.