Accessibility links
'Empire': A World Of Unbuttoned Shirts And Dishy Music Stories Fox's new drama about the family behind a music mega-company is pretty standard soapy television with some nice performances and a limited understanding of music. 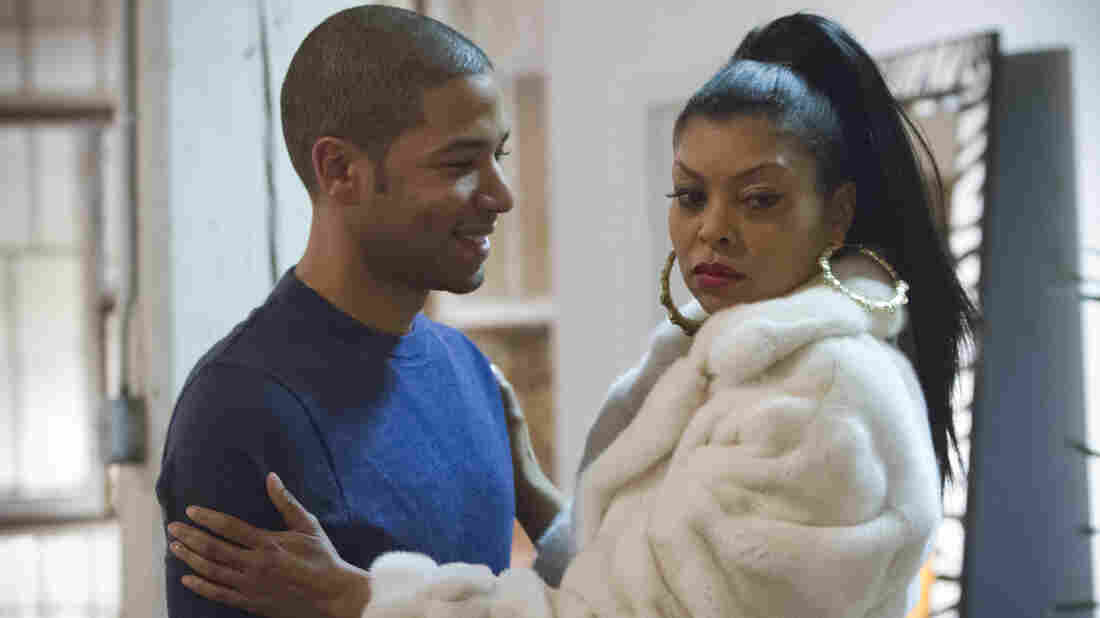 Jamal (Jussie Smollett) welcomes home his mother (Taraji P. Henson), but she has about as much more on her mind as this look makes it seem like she does. Chuck Hodes/Fox hide caption 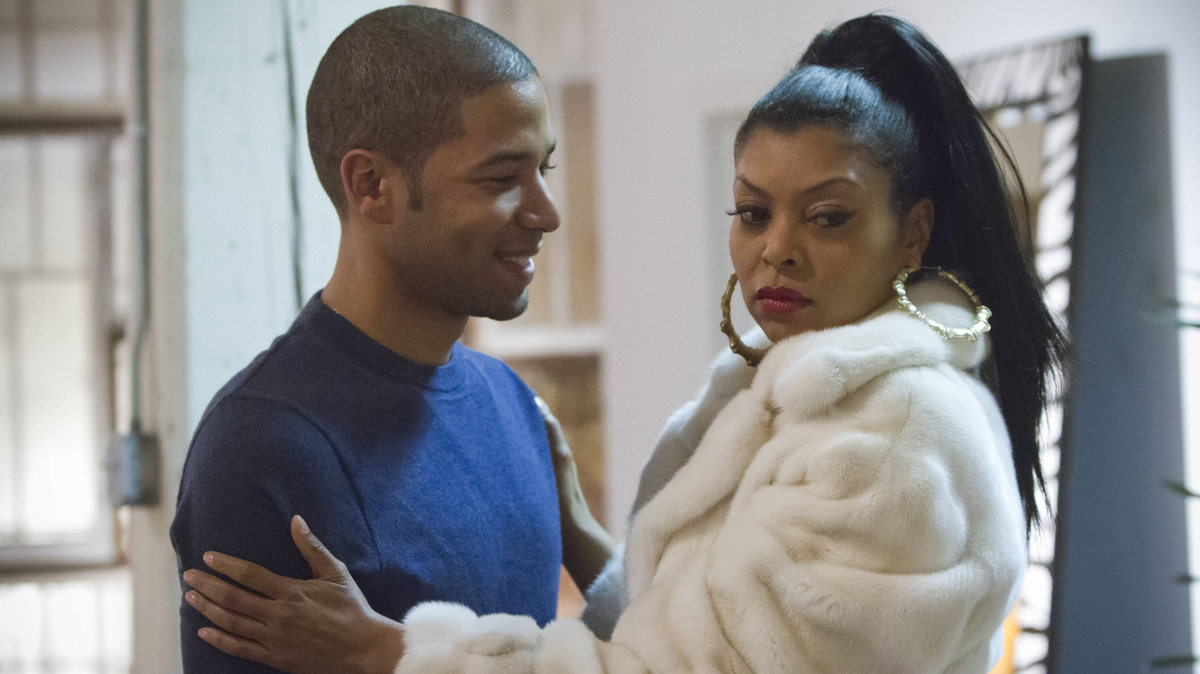 Jamal (Jussie Smollett) welcomes home his mother (Taraji P. Henson), but she has about as much more on her mind as this look makes it seem like she does.

Empire comes to Fox with an interesting pedigree: It was created by Danny Strong (who's written multiple award-winning projects for HBO) and Lee Daniels, who made Precious and The Butler — both films with a sheen of prestige, but both films to which people reacted in complex ways. It stars Terrence Howard and Taraji P. Henson, who are both past Oscar nominees. The executive music producer is Timbaland, who's worked with all kinds of folks, including Jay-Z and Justin Timberlake.

The basics are these: Hip-hop mogul Lucius Lyon (Howard) has three sons — Andre (Trai Byers), the one who went to Penn; Jamal (Jussie Smollett), the sensitive one whose relationship with his father is broken because his father can't handle the fact that he's gay; and Hakeem (Bryshere Gray), the young partying one. Lucius has just learned that he has a devastating illness, so he's looking to designate a successor to run his ... well, his empire. Which is called "Empire." On the show Empire. You can tell this is the conflict because one of the sons actually says, during a meeting, "We're all in competition to be the future head of the company?"

The welcome fly in the ointment is Cookie (Henson), the boys' mother, who's just out after spending 17 years in prison for her part of the drug operation that funded the company at the beginning, while Lucius skated for his part. As you can imagine, she figures she's owed something. Lucius has his own interesting background full of surprises, which the show signals as hard as it can whenever it can, as when he begins a board meeting while talking about how he used to sell drugs while also spinning a basketball on the tip of a pen.

Whenever narrative storytelling takes on the lives of artists — and here, it treats producer Lucius as an artist as well as a businessman — it runs the risk of making art seem like a magical function of one's personality rather than the result of work and discipline. Empire has this problem. The series opens with Lucius solving the problem of an artist he feels isn't singing quite hard enough by giving her this nonspecific advice: "I need you to sing like you are going to die tomorrow! Like this is the last song you will ever sing! Show me your soul in this music." When it doesn't work, he goes into the booth, puts his hand on her shoulder, and says, "Go back in your mind to a year ago. When you just found out your brother had been shot." (Everyone in this show seems to know multiple people who have been shot, which is perhaps an intentional and valid narrative choice, but seems a little tossed-off at times for effect, mentioned at times it might not be mentioned in real life.)

In real life, this not the extent of producing records. People who produce records actually talk to artists about what they want — volume, pitch, pauses, phrasing. Making music is, in part, a job. If your genius lies in essentially finding a lot of ways to repeat "Feeeeeeeel the music!", you're not going to last that long, I don't think. So from the beginning, this music-based show's actual interest in — and understanding of — music seems really limited. That comes up again when Hakeem and Jamal try to talk about some music they're working on, and have little to say to each other about it, despite both being musicians, besides "that's wack" and "that's hot."

That's not to say the music itself is bad. It's actually pretty catchy and entirely credible; not surprising given its provenance. But the way the show uses music in stories feels kind of clumsy and devoid of nuance.

In fact, "devoid of nuance" is kind of the show's biggest problem. Thematically, for instance, when it wants to get into the issue of record companies perhaps being reluctant to promote black artists if they're gay, it gets there by having Jamal describe the problem thusly: "Way too much homophobia in the black community." This is taken as kind of a given once it's verbalized; it's not talked about, nor is it demonstrated or substantiated. It's just announced, plunked down in the scene like a prop everyone then has to acknowledge. And, of course, it's shown in Lucius' cruel treatment of Jamal, which extends back to childhood abuse and continues up to the very awkward line, "Your sexuality? That's a choice, son."

Similarly, there are tantalizing mentions of Lucius' knowledge that a large part of his customer base is made up of white kids, but those mentions go no further. For instance, when he makes reference to "the white kids that make up 75 percent of our sales," there's nothing about that. It's just offered up like a bonus fact.

These interesting little pieces of cultural complexity aren't the show's focus, of course — its focus is an imposingly large number, even in the pilot, of interpersonal stories that can be illustrated through song. The presentation of songs isn't really integrated like it is on Glee; it's diegetic like it is on Nashville, where you hear music in situations where characters are performing music.

In fact, Empire is probably not as directly comparable to anything else on TV quite as much as it is to Nashville. That show also came to television with a pedigree of off-screen writing talent (Callie Khouri) and an undeniably great music producer (T Bone Burnett). It also was thematically blunt and overloaded with stories. In fact, as you watch Empire, you may be able to pick out the storylines you'll be tempted to fast-forward through later, just as many of us can with Nashville. And you can tell there's going to be a lot of back-stabbing, betraying, ill-advised-sex-having, crime-concealing, arguing and emoting at pianos.

There's an interesting show in here somewhere, to be sure. But there's also a lot of ornamentation trying to hang hip-hop trappings on a pretty standard piece of television. That's not necessarily bad. Just as Bella Abzug once said the goal of feminism was not only to support equality for female Einsteins but also female schlemiels, the goal of better representation of more kinds of people on television is good not only for profound, statement-making pieces that cast light on social problems, but also for dishy, sort of enjoyably trashy family sagas with unbuttoned shirts and people hiding guns under tissue paper. It is sort of hip-hop Nashville, but so what? Why not hip-hop Nashville?