Accessibility links
Try On 'Black Suit' For A Beautifully Real Approach To Grief Jason Reynolds' new young adult novel, The Boy in the Black Suit, begins on familiar ground. But this tale of a boy dealing with his mother's death is tragic, funny, hopeful and almost too realistic.

Try On 'Black Suit' For A Beautifully Real Approach To Grief

Try On 'Black Suit' For A Beautifully Real Approach To Grief 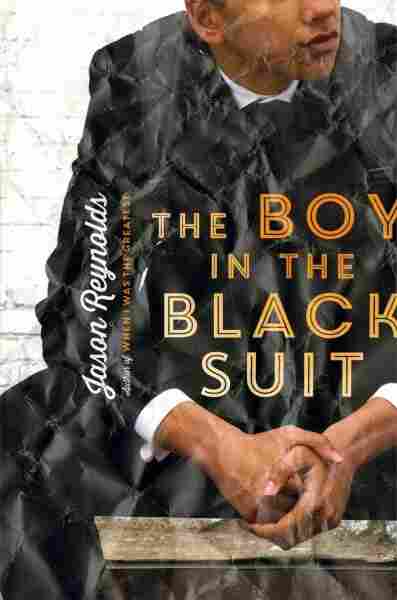 The Boy in the Black Suit

Title
The Boy in the Black Suit
Author
Jason Reynolds

Jason Reynolds' debut When I Was the Greatest put him on the radar of many YA readers looking for fresh new voices. His latest, The Boy in the Black Suit, begins in a place we've seen before: the senior lockers, the first day back at high school.

Narrator Matt Miller feels out of place and desperate. Ignored by his classmates and babied by well-meaning adults, all he can think of is how to make it through the day. At this point, the contemporary YA reader is waiting for the emotional bomb — an illness, a divorce, a death. Whatever it is that has separated our hero from the life he had before.

Matt's singularity is the latter: His mother, Daisy, died suddenly over the summer from a fast-spreading cancer. His life has gone from being a "not-so-fancy version of the Cosbys" to a struggling single-parent household where a grieving son needs to find a job to help with the bills.

This might sound like a novel you've read before, especially if you're a fan of young adult contemporary realism. It's a genre that can help anchor lived teenage experiences, and there is a real value in the poetic reflection of daily life that these books achieve at their best. And yet, all too often I feel a sort of barbed wire excluding me from their narratives: the characters are well-drawn, the situations complex and heart-wrenching, but the monochromatic world they inhabit doesn't look a thing like my own.

So in the middle of Reynolds' hilarious, tragic, hopeful and almost-too-realistic story of a regular Bed-Stuy kid figuring out how to live without his mother, I was overwhelmed with the oddest sensation: I had read this story a dozen times before. And I had never read anything like it in my life.

Reynolds' voice sings (and zings) throughout. At one point Matt's best friend, Chris, is using a giant umbrella as a cane, "walking like some potbelly pimp." Elsewhere, his father gives him some advice about a potential Thanksgiving dinner date: "And if for some reason you feel like having dessert, think twice, son. One slice of her pie could equal a lifetime of your cake, if you know what I mean."

This is a novel about death — and not only that of Matt's inimitable mother, whose heart and warmth and good humor shine through in every memory and give the reader a taste Matt's abyssal grief. Since Matt's part-time job is at the local funeral home, he finds himself surrounded daily by the rituals of bereavement, the very ones he found so inadequate at his mother's funeral. And to his shame and delight, Matt discovers that the only place he can find peace is in a black suit, sitting in the back pew of a funeral service, searching for a spark of shared grief in the faces of those left behind.

I had read this story a dozen times before. And I had never read anything like it in my life.

"Day after day, week after week, funeral after funeral, I searched for that person — almost always sitting in the front — and watched them deal. Saw them rock back and forth, the sound of their hearts breaking, weeping, sobbing, all in the pitch of pain ... Every time I saw them, the closest ones, bent over in tears, it felt like a warm rain came down inside me."

Matt craves that moment of release from the isolation of grief, but for the reader this parade of funerary rites also provides a fascinating portrait of a community living under the pall of institutionalized racism and violence. Reynolds does not waste his talents on an idealized, sanitized (and certainly not whitewashed) world.

He gives us funerals for gang members, actors, centenarian school teachers and teenage honor roll students. He sketches Matt's Bed-Stuy in razor sharp lines, in canny depictions of the intersection of age and class and race and gender. Far too few novels in this genre star young black men, but his world is as rich and as varied and as solidly real as its best exemplars.

One of the novel's memorable metaphors comes when Matt is discussing grief and disappointment with his mentor, Mr. Ray, who has seen his share of both. Life, says Mr. Ray, is like the kid's card game I Declare War: You flip cards, and sometimes you win and sometimes you lose. What you can't do, he says, is plan ahead.

"I can lose and lose and lose and I don't know why. But there's nothing I can do but just keep flipping the cards. Eventually, I'll win again. As long as you got cards to keep turning, you're fine. Now, that's life."

For a novel all about death, Reynold's impressive sophomore effort is full of that life.

Read an excerpt of The Boy in the Black Suit