Accessibility links
'The Galaxy Game' Is Rich And Strong As A Shot Of Rum Karen Lord's new The Galaxy Game picks up where her previous novel, The Best of All Possible Worlds, left off — in a complicated galactic civilization trying to come to terms with a genocide. 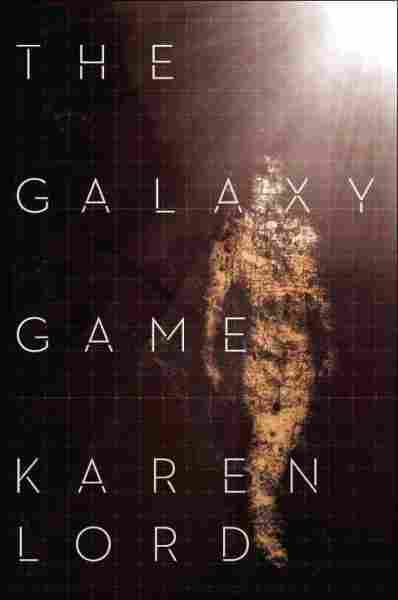 Two scenes in The Galaxy Game are useful metaphors for my experience of reading it: In one scene, two characters travel from one planet to another, and have to adjust their balance and breathing to the unfamiliar gravity of their new environment. In the other scene, one character introduces another to rum.

Reading The Galaxy Game is almost precisely like drinking the richest, most full-bodied rum while trying to find your legs on a new planet (especially if — like me — you didn't realize this was a sequel to 2013's The Best of All Possible Worlds).

A brief summary — previously, the first four Crafted Worlds were in harmony, populated by variations on the theme of humanity, as articulated by a tongue-in-cheek creation myth:

"One egg was thrown down to Sadira. There humanity grew to revere and develop the powers of the mind. Another egg was sent to Ntshune, and the humans who arose there became adept at dealing with matters of the heart. A third egg arrived at Zhinu, and there the focus was on the body, both natural and man-made. The last egg came to Terra, and these humans were unmatched in spirit. Strong in belief, they developed minds to speculate and debate, hearts to deplore and adore, and bodies to craft and adapt. Such were their minds, hearts, and bodies that they soon began to rival their elder siblings."

This myth is complicated by the politics of colonialism, immigration, telepathy, and social credit in a galaxy that's recently suffered an act of genocide against one of its founding societies: at the start of The Best of All Possible Worlds, Sadira, the planet at the core of keeping galactic order, has been rendered uninhabitable by Ain, one of the colonies. Ain is then sealed off from the rest of the galaxy; the Sadiri people have scattered and settled in various places, while a frighteningly reactionary group set on establishing New Sadira are determined to round up all surviving Sadiri women and start breeding programs to grow their numbers again.

Lord makes startling, sudden connections between immigrant communities, social capital, assimilation, and commerce that left me feeling breathless as I read. There is a weight and grace to her prose that put me in mind of pewter jewelery.

Set against this backdrop are Rafi, a young teenager struggling to understand and control his peculiar psychic gift, Ntenman, a charming scamp trying to find his place in the world on his own terms, and Serendipity, a young woman from an all-telepath community trying to come to terms with the changes in her society.

The world-building in this book is enormously, challengingly rich: I often found myself having to re-read passages and flip back to remind myself of the connections between a large number of unfamiliar names, social designations, and technologies. But Lord uses this richness to make such sharp, dislocating insights that I was often staggered: a third of the way through, I commented on Twitter that "reading Karen Lord's new book feels like someone reaching into my chest, pulling out a seashell and holding it to my ear."

With a careful, studied grace, Lord makes startling, sudden connections between immigrant communities, social capital, assimilation, and commerce that left me feeling breathless as I read. There is a weight and grace to her prose that put me in mind of pewter jewelery.

Though there was a great deal to absorb, it was only towards the very end of The Galaxy Game, when I felt the narrative gaze pulling back from the character voices in a way that seemed to comment on a larger story I'd not been privy to, that I began to suspect I was reading the second book in a series.

I had no problem enjoying this story as a stand-alone, but I do believe that reading the preceding novel would have gone a long way towards steadying me in the unfamiliar gravity of Lord's world. As it was, the shock of fermented sugar helped the narrative medicine go down, and after the whirlwind of politics and personalities, I found myself licking my lips.

Read an excerpt of The Galaxy Game