Accessibility links
As Dallas Comes To Town, Green Bay Remembers Historic 'Ice Bowl' This weekend's playoff game between the Green Bay Packers and the Dallas Cowboys is being billed as the second "Ice Bowl." The 1967 game in Green Bay was one of the coldest football games ever played. 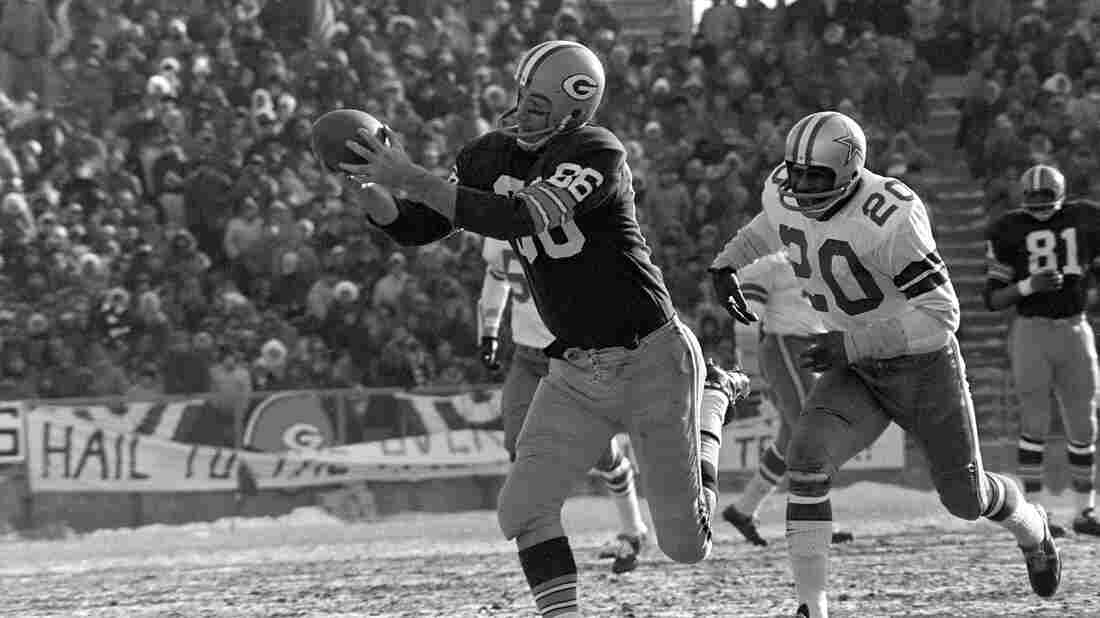 Boyd Dowler of the Green Bay Packers grabs a Bart Starr touchdown pass in the NFL championship game on Dec. 31, 1967. The "Ice Bowl," played in frigid temperatures, was won by the Packers 21-17. AP hide caption 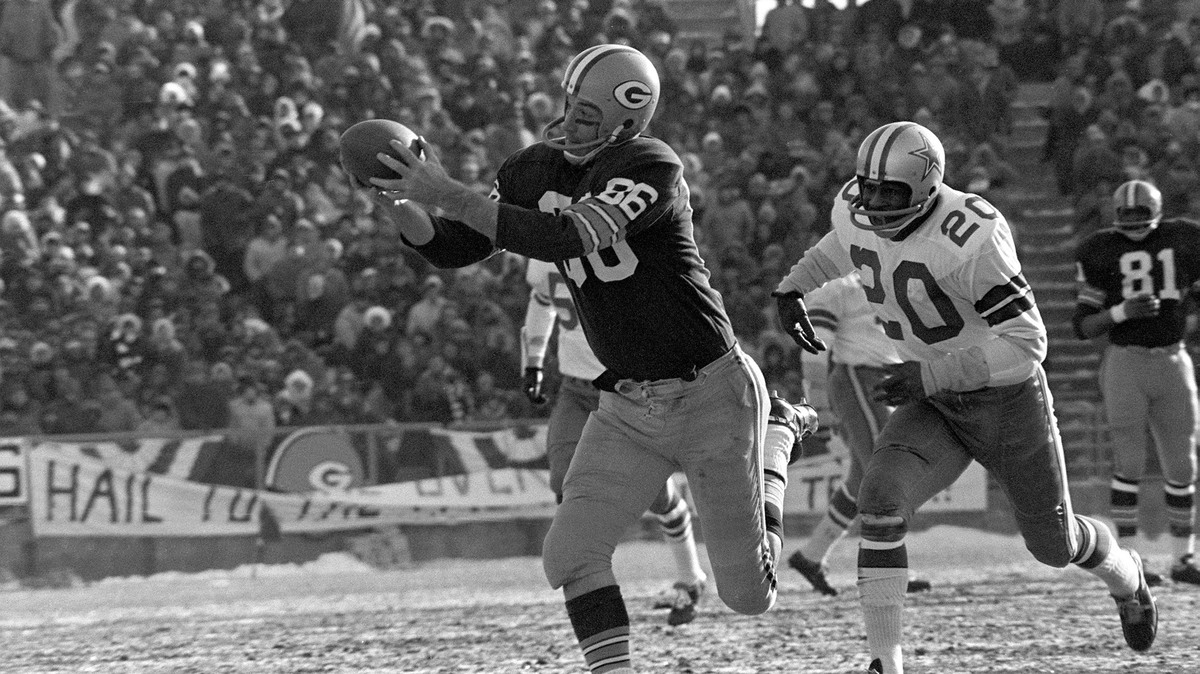 Boyd Dowler of the Green Bay Packers grabs a Bart Starr touchdown pass in the NFL championship game on Dec. 31, 1967. The "Ice Bowl," played in frigid temperatures, was won by the Packers 21-17.

This weekend's NFL playoffs include a faceoff between the Green Bay Packers and the Dallas Cowboys. That game is being billed as the second "Ice Bowl."

These teams have played each other often since that cold game on Dec. 31, 1967, but this is the first time since then they'll meet for a playoff at Lambeau Field.

The temperature that day was minus 15. But while it will be cold in Green Bay this Sunday, it won't be that cold.

"I feel fine except for my face," says Packers CEO Mark Murphy.

On Wednesday, he kicked off a campaign to "paint the town green and gold," where he spray-painted slogans in the team's colors on a downtown street. Murphy is excited for this weekend's matchup, but he's hesitant to consider this the second coming of the Ice Bowl.

"Our field is heated, so we should never have a frozen tundra," he says. 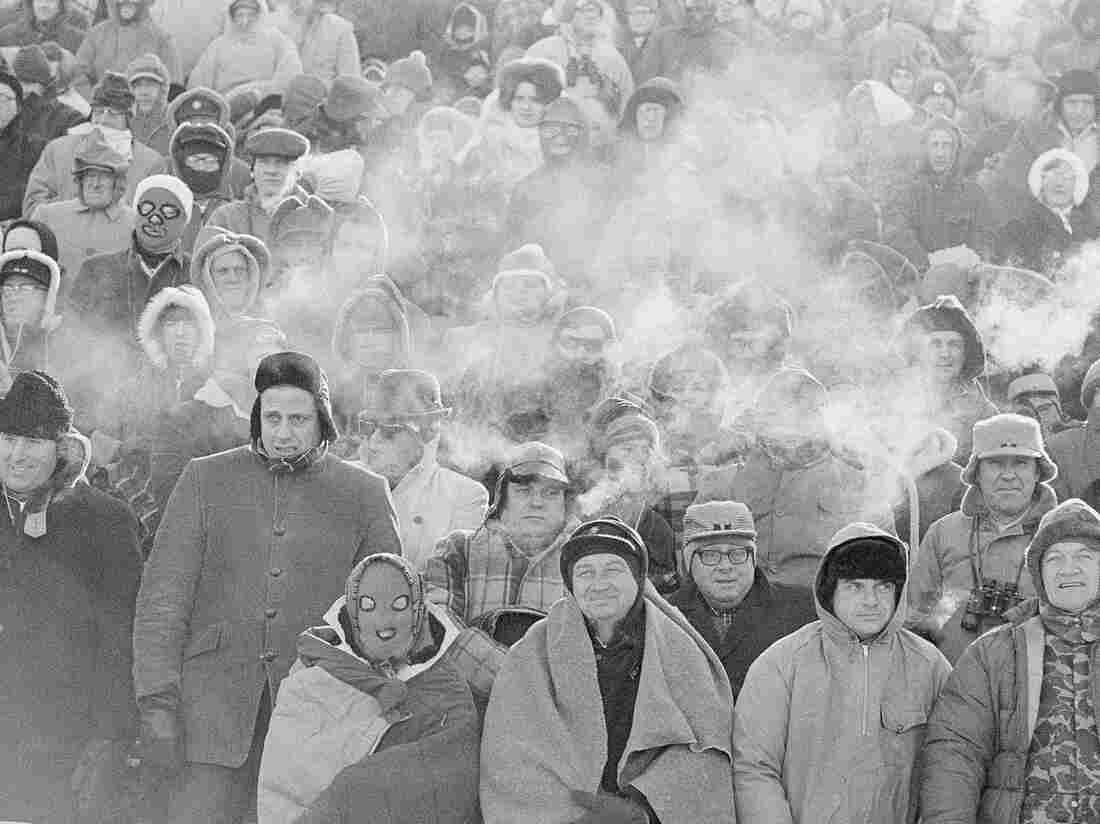 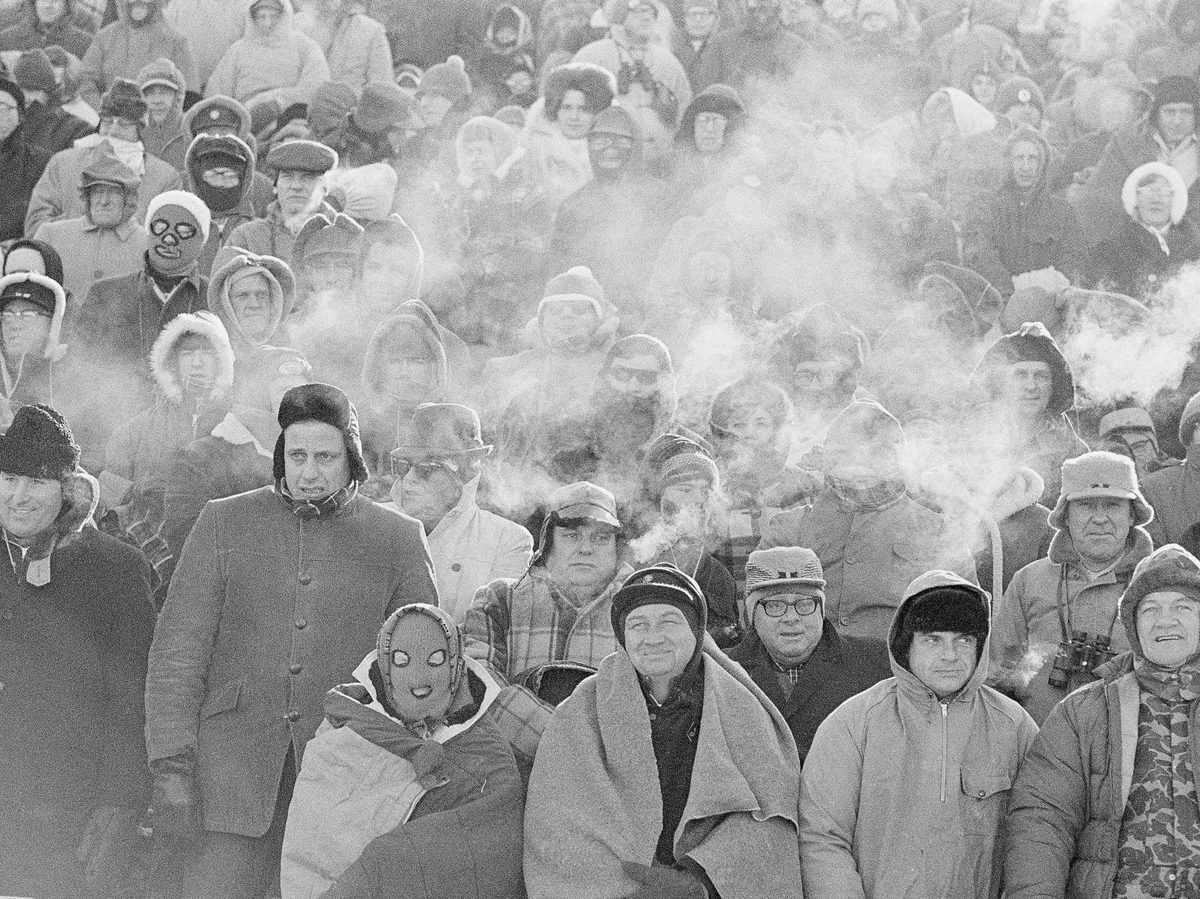 Fans watch the Green Bay Packers play the Dallas Cowboys in the NFL Championship game in Green Bay, Wis. on Dec. 31, 1967. Many fans are calling this weekend's game the second "Ice Bowl."

"I've always been very impressed with the way our players, and players generally, have been able to perform in all kinds of weather," he adds. "You think back in '67, they didn't have so many of the advantages that we have now in terms of keeping people warm and [being] able to play in the conditions."

In that game, with only seconds to go, Packers quarterback Bart Starr ran into the end zone for the game-winning touchdown. Green Bay beat Dallas 21-17.

It's something John Hess will never forget. He's a longtime season ticket holder and will be in the same seat this weekend as he was in 1967. He's even embroidered the seat number on his hat: Section 116, Row 7, Seat 23.

Hess will be sitting next to Mel McCartney, who was also with him that day. McCartney remembers the cold and thinks this weekend's temperatures in the teens will feel downright balmy.

"One of the key things is the ball freezes at 15 below," he says. "I mean the ball will be cold here and hard, but the ball gets like a rock when it's 15 below."

The Ice Bowl is the NFL's equivalent of Woodstock. McCartney says if everyone who says he was there actually was there, Lambeau Field would have had to have been a lot bigger.

Wes Hodkiewicz, a Packers reporter for the Green Bay Press-Gazette, says he thinks the Ice Bowl can never be repeated.

"I think there's always going to be one Ice Bowl," Hodkiewicz says.

But he says the rivalry between Green Bay and Dallas has stayed strong since '67.

"I think the conditions that were involved with it, it's not going to be that cold," he says. "But at the same time, this is very meaningful for people in Green Bay because there is that history there with Dallas. And in the '90s when the Packers were kind of coming back after two decades of really struggling, Dallas was the team that kept getting in the way of them making that run back to the Super Bowl."

Hodkiewicz says the epic cold and that last-second play against Dallas helped the Green Bay Packers cement a place in history.

"The Dallas defensive line, I think it was the 'Doomsday Defense,' they were known for being able to stop teams in short-yardage situations," he says. "For it to be not only that scene and that, you know, environment, but to come down to a significant play like that, a last-second play, that just doesn't happen a lot. That's magic."