Accessibility links
'Golden Son' Is Space Opera That Doesn't Forget The Opera Pierce Brown's followup to last year's Romans-in-space epic Red Rising is bigger, louder, and bloodier than its predecessor. Reviewer Jason Sheehan says it isn't perfect — but it is hard to put down. 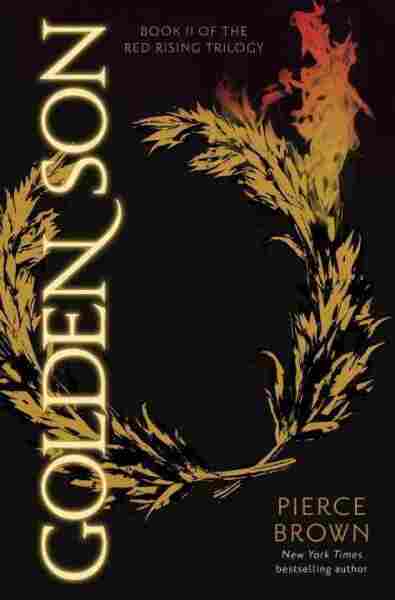 Not because of its grandeur, though it did have some. Not because of its spaceships or the hero's journey of its main character, Darrow — a young man chosen to be the savior of his oppressed people on Mars. No, it put me in mind of Star Wars because, like George Lucas, Pierce Brown ought to be held up as one of literature's great borrowers. A writer (like Lucas) who never met an arc, a trope or a theme he couldn't lift, twist, polish and fit precisely into the framework of his own story.

Now I'm not saying this is a bad thing. I love Star Wars, love the hodge-podge school of science fiction, with writers endlessly lifting riffs and ideas from their fellows and playing with them until they break. Red Rising was a pastiche of a dozen or a hundred dystopian stories of teenagers growing up and doing exciting and dangerous things — like murdering each other and flying spaceships. Golden Son is the same deal, only with even more murder and spaceships. But what sets these books apart from the over-crowded pack is that Brown is just so friggin' good at it.

Red Rising was entertaining. Golden Son is so much better. Red Rising was all about set-up and world-building. Golden Son is about smashing everything to pieces as violently as possible. It picks up right where Red Rising left off, with 20-year-old Darrow, secret hero of the Red rebellion — Reds being the bottom of Brown's color-coded caste system. Darrow is masquerading as a ruling-class Gold, trying to bring down the society that oppresses his people from the inside by gaining power among the Golds and then, somehow, making everything better.

'Red Rising' was like 'The Hunger Games' with real blood under its nails, and 'Golden Son' is like a lost Ender Wiggin story peopled entirely by psychopaths.

It sounds stupid, I know. But trust me — you've just got to take a deep breath, accept the hackneyed, trope-ridden world Brown has assembled, and dive straight in. Because with the exception of two long-ish breaks for conversation and one face-off across a table that is settled with words rather than guns or swords, the first two hundred pages of the book are essentially one sustained action sequence that starts huge, backs off, revs its engines, pauses to adjust its jetpack, then surges forward into something even larger, bloodier and more unequivocally awesome.

Brown writes layered, flawed characters and has a Hollywood director's eye for blowing stuff up, but plot is his most breathtaking strength. Like a finely-wrought machine built for exploding, every action seems to flow into the next. The stakes are big (control of the solar system), as are the themes (love, vengeance, honor, duty and betrayal), and the whole things hums along with operatic crescendos of violence studded here and there with heartfelt speeches about power and freedom.

Where Brown began cruel and calculating in Red Rising, now he is merciless. To borrow an overused comparison from above, Red Rising was like The Hunger Games with real blood under its nails, and Golden Son is like a lost Ender Wiggin story peopled entirely by psychopaths. There's a young adult marketing angle to the Red Rising trilogy (because, at the start, Darrow is just 16, which makes it seem a natural fit), but honestly, it's not traditional YA at all.

Owing to some wild streak of honesty, Brown writes characters who behave like the murderous, entitled, terrified, insane, bestial kids they are (meaning they barf and swear and shriek and have sex and do drugs and otherwise carry their terrible wounds with them) rather than just twirling their hair and daydreaming about which boy they really like more. There is little childishness here. The path Brown's plot carves across space, the moon and Mars is lined with characters bleeding out in the dust. No one makes it through the book unscarred. Most don't make it at all.

Golden Son is by no means a perfect book. Darrow is too good at everything, and the bad guys seem a bit mustache-twirly and overly fond of peeing on their vanquished foes. The regimented, color-coded world Brown has created is a lazy writer's crutch for filling space with disposable extras, and the Golds' hack Roman culture is an overused signifier for the corruption of empire (even if Brown handles it with some deftness, and that whole schtick tickles some kind of deeply buried nerd bone in me).

There are examples of clunky, cliché-ridden writing that could've been smoothed over, but with the breakneck pacing and all the narrow escapes, betrayals and armored space-knights falling dramatically from the sky, every ugly sentence ended up in the rearview so quickly that there must've seemed little point.

Which, I think, is actually why I consistently found myself hating to put Golden Son down. Because in the course of all his borrowing and murdering, Brown managed to remember the one all-important rule of writing great space opera: Don't forget the opera.