Accessibility links
Novelist Robert Stone, Known For 'Dog Soldiers,' Dies At 77 Robert Stone, the award-winning novelist who spun out tales worldwide of seekers, frauds and other misbegotten American dreamers in such works as A Flag for Sunrise and Dog Soldiers, died on Saturday. 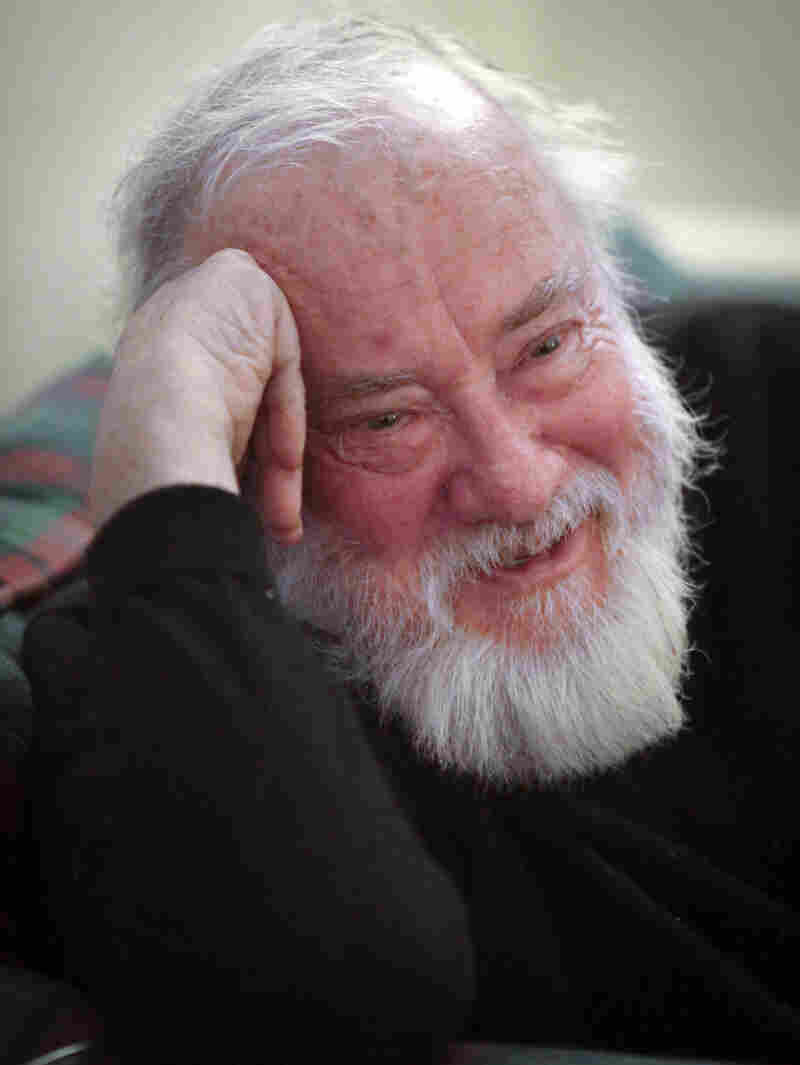 Novelist Robert Stone during a 2013 interview in New York to promote his book Death of the Black-Haired Girl. Stone's literary agent, Neil Olson, told The Associated Press that Stone died Saturday at his home in Key West, Fla. The cause was chronic obstructive pulmonary disease. Bebeto Matthews/AP hide caption 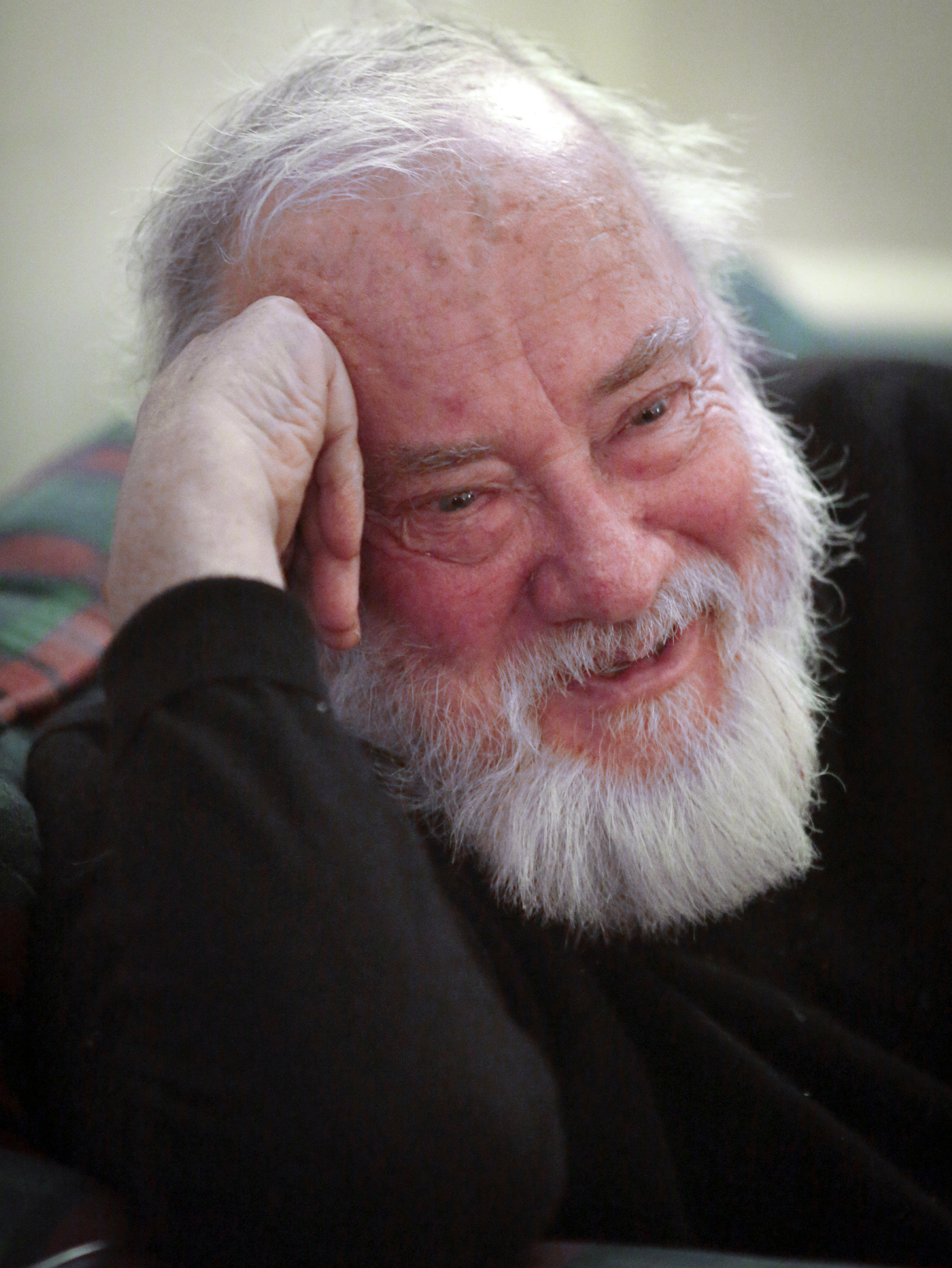 Novelist Robert Stone during a 2013 interview in New York to promote his book Death of the Black-Haired Girl. Stone's literary agent, Neil Olson, told The Associated Press that Stone died Saturday at his home in Key West, Fla. The cause was chronic obstructive pulmonary disease.

Robert Stone, the award-winning novelist who spun out tales worldwide of seekers, frauds and other misbegotten American dreamers in such works as A Flag for Sunrise and Dog Soldiers, died Saturday at age 77.

Stone died at his home in Key West, Fla., his literary agent, Neil Olson, told The Associated Press. The cause was chronic obstructive pulmonary disease.

A lifelong adventurer who in his 20s befriended Ken Kesey, Neal Cassady and what he called "all those crazies" of the counterculture, Stone had a fateful affinity for outsiders, especially those who brought hard times on themselves. Starting with the 1966 novel A Hall of Mirrors, Stone set his stories everywhere from the American South to the Far East and was a master of making art out of his character's follies, whether the adulterous teacher in Death of the Black-Haired Girl, the fraudulent seafarer in Outerbridge Reach, or the besieged journalist in Dog Soldiers, winner of the National Book Award in 1975. A Flag for Sunrise, published in 1981, was a finalist for the Pulitzer Prize and PEN/Faulkner award and had the unusual honor of being nominated twice for a National Book Award, as a hardcover and paperback. In 1992, Outerbridge Reach was a National Book Award finalist.

Stone's face — well-lined, framed by a sharp stare and weathered beard — was a testament to a life fully and painfully lived. He was a neglected and traumatized child who learned early not to trust reality, a lapsed Catholic consumed by questions of sin and redemption. Inspired to write novels after re-reading The Great Gatsby in his 20s, he identified so strongly with his characters he once broke down sobbing, at a college library, while working on Dog Soldiers.

"Writing means you and the computer or you and the typewriter, and sometimes there's an enormous weight of emotion which you have nowhere to take," Stone told The Associated Press in 1992. "I think it's a reason writers drink; you can get so incredibly wound up you're weeping and laughing. Writing is how I justify my existence. This is a basic hunger for most people; they want their suffering to mean something. You go through all these things and the idea it's utterly of no consequence is very difficult to work with."

Stone's books also included the novel Damascus Gate, another story of a wayward journalist, this time in the Middle East; Children of Light, the fictional saga of a drunken screenwriter in Mexico; and a memoir about his years with Kesey and friends, Prime Green: Remembering the Sixties. He helped write screenplays for adaptations of Hall of Mirrors (retitled WUSA and starring Paul Newman and Joanne Woodward) and Dog Soldiers (released as Who'll Stop the Rain starring Nick Nolte and Tuesday Weld).

A native of New York City, he was abandoned at birth by his father and ended up in a Catholic orphanage after his mother, who suffered from schizophrenia, was institutionalized. He remembered himself as a loner and fantasizer, ambling through Central Park as a boy and pretending he was detective Sam Spade. Desperate to break away, he left high school and joined the Navy at 17. By his mid-20s, he was living in New Orleans, dropping acid when he should have been working on a book and selling Collier's Encyclopedias.

"I was selling them in Pearl River County, Mississippi, and other areas not far from New Orleans," he told The Associated Press in 2013. "And every time we hit a town with our encyclopedias, we always got busted by the cops, because they always thought we were in town agitating. We were locked up about seven times. We had to get the Collier's lawyers to come spring us. And sometimes we didn't know if they were going to beat us to death, or if they were going to buy us coffee."

After New Orleans, he moved to the Bay Area, met Kesey and friends and, like so many of his peers in the '60s, went out to "discover America." Stone would begin sharing what he had seen and done with A Hall of Mirrors, a surreal tale of corruption, decadence and breakdown in New Orleans.

"A Hall of Mirrors was something I shattered my youth against," he told The Paris Review in 1985. "It was written through years of dramatic change, not only for me, but for the country. It covers the sixties from the Kennedy assassination through the civil rights movement to the beginning of acid, the hippies, the war."

Stone is survived by his wife, Janice, with whom he had two children. Olson said he had been working on a novel at the time of his death, but had no immediate comment on whether the book would be published.