Accessibility links
Book Review: 'Outline,' By Rachel Cusk | Reviewer Heller McAlpin says Rachel Cusk, known for her lacerating memoirs, begins to bring her fiction and nonfiction closer together in Outline, an "impressive deepening" of her work. 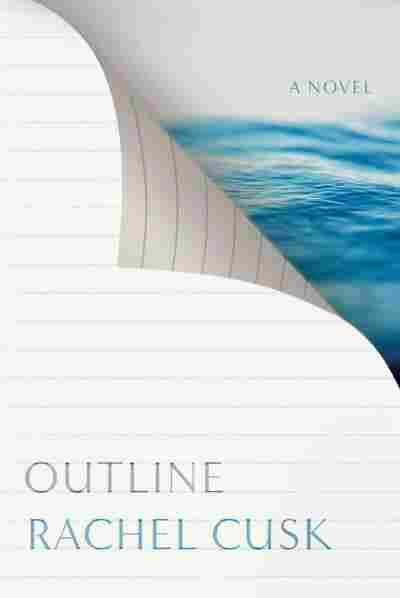 Rachel Cusk is better known in England than in America; her sharply satirical books about the tolls of family life play better across the Atlantic than here in our often puritanical culture, with its bias towards domesticity. In her controversially bitter memoirs, including A Life's Work and Aftermath, and in piercing — but always beautifully written — novels like The Lucky Ones, Cusk has examined the difficulties of self-definition in the context of marriage, motherhood and family. Her preferred form is episodic, capturing the trials and tradeoffs of interdependency in a series of penetrating snapshots.

Outline, her eighth novel, moves further still from plot-driven narrative. Its storyline, such as it is, spans a few days in the life of its narrator, a divorced English writer named Faye who flies to Athens for a short stint teaching a summer school course; she's one of a revolving group of visiting writers. In ten closely observed chapters, Faye relays the surprisingly confiding — and engrossing — stories people tell her about their lives during her short Greek odyssey.

Most of the stories involve disappointments and divorces: An old friend in publishing confesses that he felt himself an utter failure when he snapped her picture with her husband and two sons, pre-divorce, at their last meeting, three years earlier. "You seemed so happy with your family, so complete, it was an image of how things ought to be," he says. It turns out that Faye was as clueless as he about her imminent breakup.

Cusk anchors her novel with a recurring character, an older Greek man Faye meets on the flight to Athens, who engages her with the saga of his three failed marriages. His omissions — which she points out as if criticizing a student's work — are as telling as what he chooses to include, highlighting the one-sided nature of stories, and especially divorce stories. Although physically repulsed by him, Faye agrees to meet her seatmate twice during her limited time in Greece to go swimming off his boat outside Athens — excursions which in turn generate stories she shares with friends she meets for dinner.

After Silence, An 'Outline' Of A Life In Fragments

We learn about Faye indirectly, through her questions and reactions to all these personal tales. Punctilious corrections of her airplane neighbor's English — replacing solicitude with solitude, for example — reveal how much language matters to her, while her objections to his harsh portrayal of his second wife subtly expose her own unhappily divorced state. Faye finds it impossible to say why her marriage ended, only that "among other things a marriage is a system of belief, a story, and though it manifests itself in things that are real enough, the impulse that drives it is ultimately mysterious." As in Cusk's previous work, the portrait of matrimony that emerges is anything but heartwarming.

Outline explores both the way people present themselves and the act of storytelling. On one level an absorbing series of confessional tales, it is also a deft, multi-layered commentary on the nature of narrative and the effects of a listener's bias and filter. As a locquacious young student in Faye's class says, "a story might merely be a series of events we believe ourselves to be involved in, but on which we have absolutely no influence at all."

Far from a random string of anecdotes, Cusk's novel is tightly, carefully structured, coming full circle with the arrival of the next visiting writer taking Faye's place as teacher. This high-strung playwright also has a story to tell, about her neighbor on her flight from England, a multilingual diplomat who strikes her as everything she is not. Faye explains, "This anti-description, for want of a better way of putting it, had made something clear to her by a reverse kind of exposition: while he talked she began to see herself as a shape, an outline, with all the detail filled in around it while the shape itself remained blank." Yet blank as it is, this empty outline gives "a sense of who she now was."

Whereas Cusk's earlier books examined self-definition in the context of marriage and family, her latest ventures outside the home, intriguingly exploring the way people measure themselves in relation to other people's stories. Outline marks an impressive deepening of Cusk's work, and a bold step toward integrating her fiction and nonfiction. There's nothing empty or sketchy about it.