Accessibility links
Interview: Ethan Hawke And Patricia Arquette Of 'Boyhood' If the story fell apart after 12 years of filming, it would have been a "real drag," says Patricia Arquette, and a "colossal waste of time," says Ethan Hawke. Instead, it won three Golden Globes. 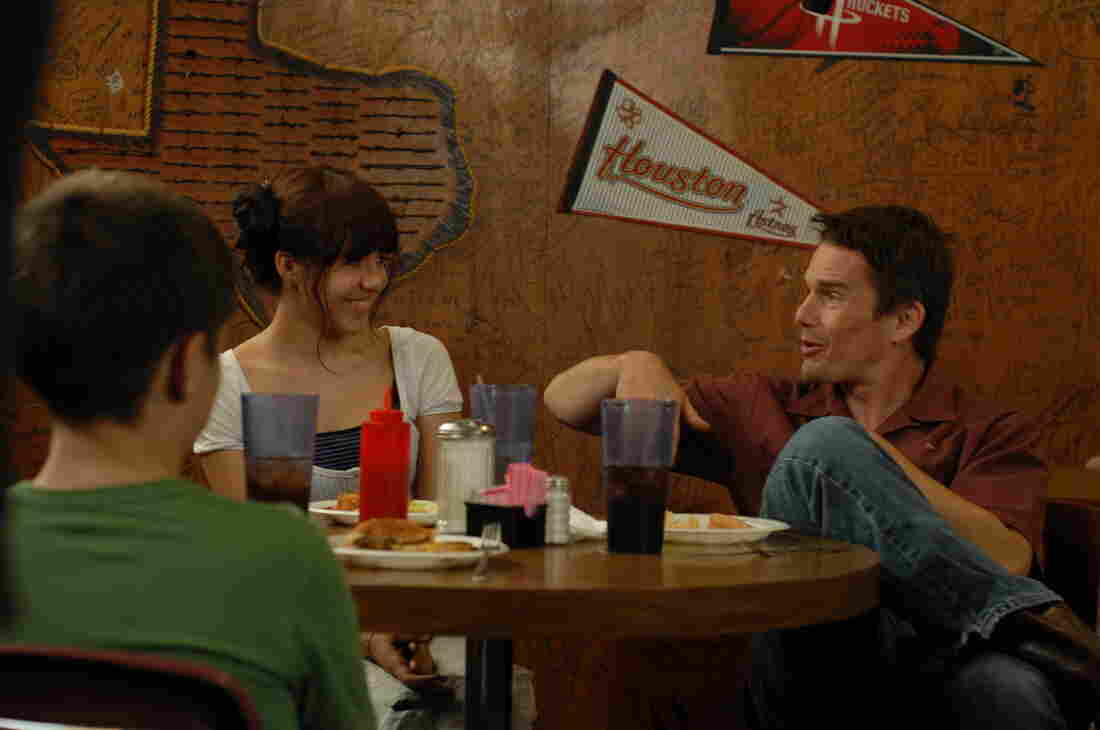 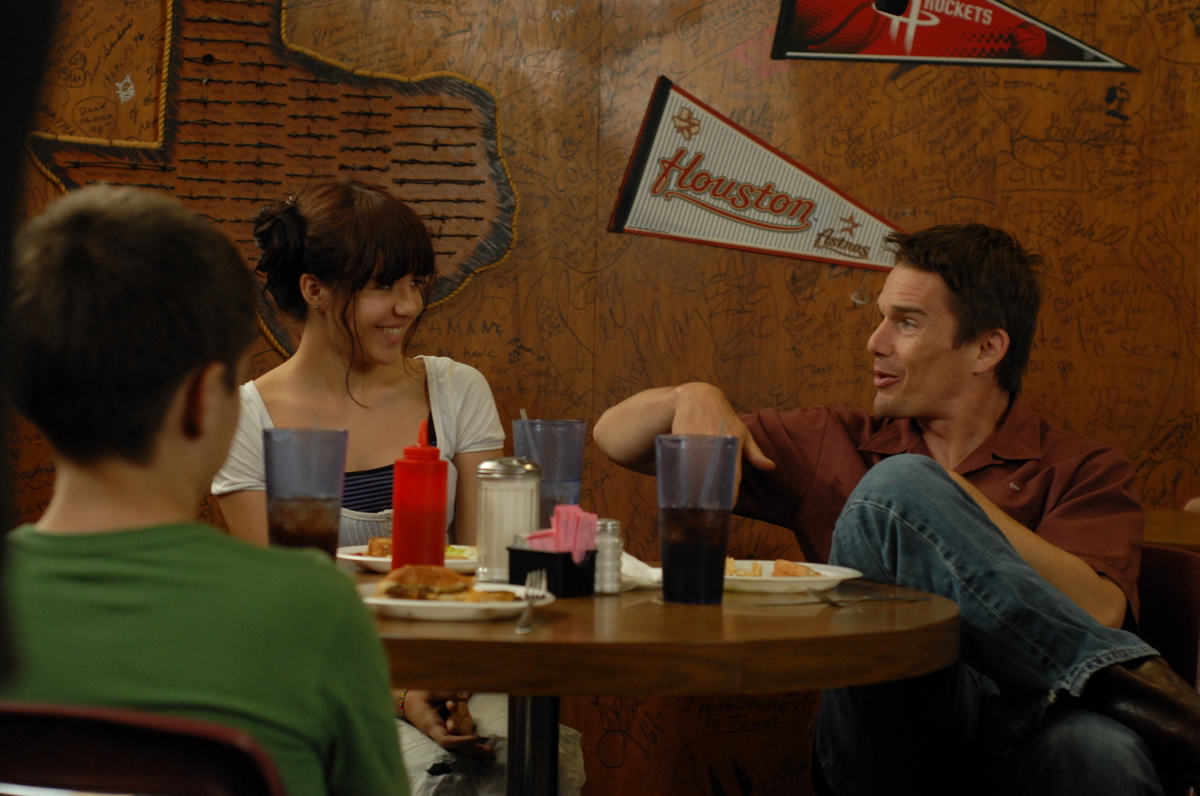 The cast and director Richard Linklater, who also won the Golden Globe for best director, invested many years trying to depict how coming of age happens in a series of little moments. It was something that had never been captured on film before. 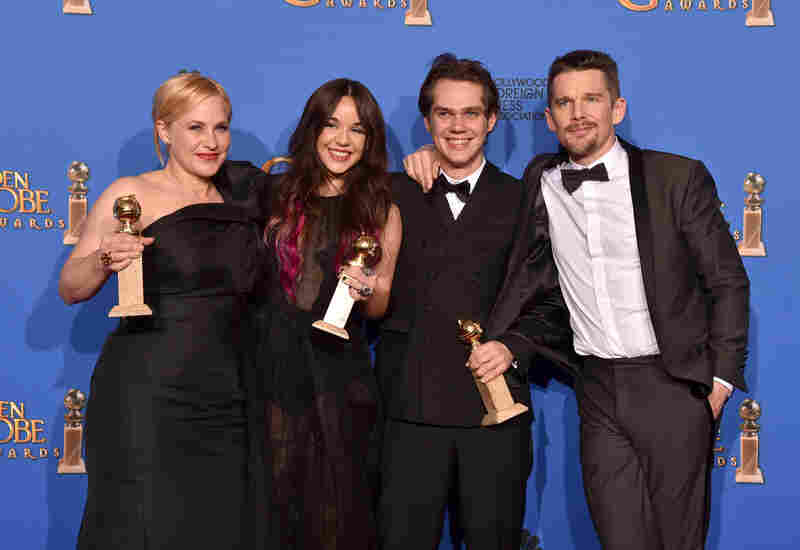 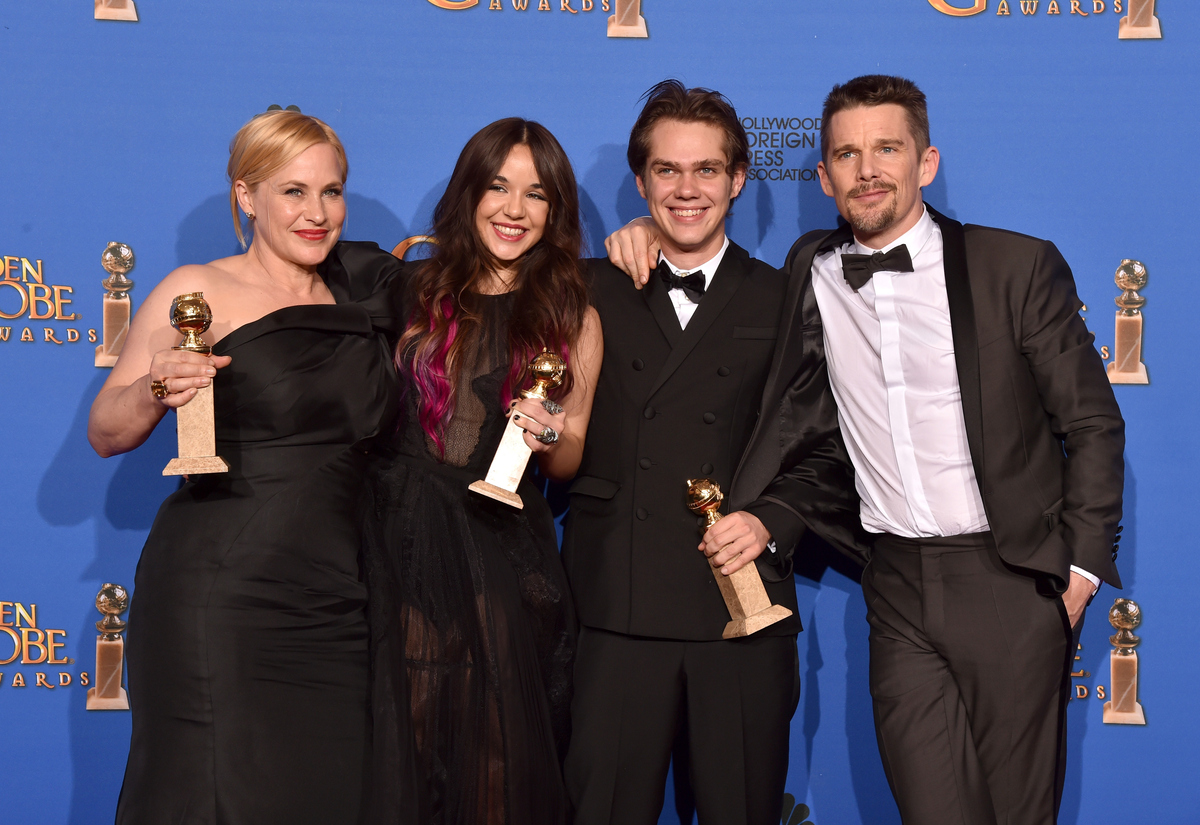 "I was amazed that they could get financing for something that wouldn't see any return for 13 years," Arquette tells Fresh Air's Terry Gross. Arquette won the Golden Globe for best supporting actress. "There [were] points in time along the way where I thought, 'OK, we're seven years in. If this falls apart right now, this will be a real drag.' "

"A colossal waste of time," Hawke chimes in.

But lucky for the actors, it wasn't.

"For me, the biggest question ... was, 'Could Rick [Linklater] end it? When it came to be over, would you feel you were told a story?' " Hawke says. " ... I remember when he showed me the first cut, it was just — it was like if getting punched in the gut could feel good, that's what it was like. I couldn't believe he'd finished it and he had sailed it into port."

Arquette and Hawke talk about the emotions involved in acting, how casting is an "act of faith," and seeing the full movie for the first time.

On aging in the film and as an actress in Hollywood

Arquette: As an actress, for me, I think there's such a pressure in the world for women to look a certain way, especially if you have success at a certain moment in your life in the ingenue age group — that you're supposed to hold onto that. And I really wanted to move away from that status as quickly as possible.

"If you look at paintings throughout history of female beauty, the one that we're creating right now is a really weird one."

It's true for human beings that a lot of the story of life is the mating story, is the falling in love story, is the having children story; so it does make sense that a large percentage of the stories are told in that age group, I think. But Hollywood tells the actresses what they need to look like to continue working, and I don't believe that of human beings. I don't believe that's true of many stories, and I do think as an actress it gives you a very short shelf life if you buy into that. ...

If you look at paintings throughout history of female beauty, the one that we're creating right now is a really weird one.

Arquette: Right before [my son was born] I had gotten my first big movie, and it was really a great art movie — it was Last Exit to Brooklyn. It was a star-making part, a great part, and between the time that they offered it to me and they started shooting, I discovered I was pregnant. And that character really goes through a lot of difficult things in that movie, and it was my first time having a baby and I thought, "I don't want to be pregnant and emotionally go through this woman's journey, which is very violent at certain points, with a baby inside me."

It was a very difficult moment where I sat down with the producers and they said, "Well, we think you could still shoot this while you're pregnant."

I said, "Well, let me just walk around the block."

I came back and I said, "I can't do this movie because I don't know how that will be for my baby."

I didn't know if I would ever get another movie. Right after I had him, I auditioned and I wasn't getting movies, and I remember walking into this restaurant on Sunset Boulevard applying for a job as a waitress. I said, "I'm smart. I don't have a lot of experience; I like people; I'm nice to people; I learn fast; and I have a baby to feed." They gave me the job and I was going to start on Wednesday, and that Monday I got a call that I got my first movie after my son. ...

"I remember when he showed me the first cut, it was just — it was like if getting punched in the gut could feel good, that's what it was like."

Hawke: When you're acting, your body often doesn't know you're acting. Our emotional life is our currency as an artist, the same way that a painter has paint. It's very strange to explain to people, but sometimes when I'm doing a play with a very emotionally violent character, my body doesn't know I'm acting. You know that weird feeling after you have a horrible fight with somebody you love — that's kind of the way I'd feel taking the subway home after the theater. It beats up your body.

A lot of people wouldn't have done that, Patricia. I had never heard that story about Last Exit to Brooklyn before. ... You're very wise to do that because you don't really know what a baby is going to feel and what it doesn't, but the little bit of experience I have acting and knowing how my body responds — Last Exit to Brooklyn is a not a part any child wants to play.

Hawke: It's an act of faith. ... I knew that if Ellar [Coltrane] wasn't an artist, if that didn't come to be, that the movie wouldn't work. But there are a lot of gambles in trying to do anything unique. I have great faith in Rick — it's a chicken-and-egg situation too. I mean, it's like Ellar went to a theater camp with Richard Linklater for 12 years. Rick's a great coach and Ellar is a special kid. ... A lot of effort and love went into creating a space that was available for them to use their creativity to a positive end. The greatest blessing in the movie is the fact that Ellar turned out to be James Dean.

Arquette: Rick jokes about the casting process like it was trying to find the Dalai Lama.

On seeing the movie in sequence for the first time

Arquette: It was different with each person. Ethan saw it almost every year, or pieces of it every other year or something; I saw a rough cut at five years. Rick didn't really want the kids to see it. He would've shown it to them had they asked, but they never asked. He didn't want them to become self-conscious. ... I wanted to wait to see it with an audience, so I actually saw it for the first time at Sundance.

Hawke: While we were making Boyhood, during that time period, I co-wrote two movies with Rick. I acted in, I think, four others, so this movie is an extension of a kind of ethos that we've been working on since we met on Before Sunrise. So I got to kind of ride shotgun on the whole deal. It's just the nature of our relationship, I think.

On letting go of his character after 12 years

Hawke: There's something so beautiful about the final moments of the movie, and it was clear to me that it's about an adult being born. Yeah, would I love to see Mason Sr. get older. I'd like to see where he goes and what the evolution of his thought might be. But, that said, the magic of the movie is that it is over.