Accessibility links
New Apps Give Teens Easier, Persistent Access To Mental Help The services provide coaching, counseling and monitoring for young adults with eating disorders, depression or other issues; some experts caution that they aren't a replacement for face-to-face talks. 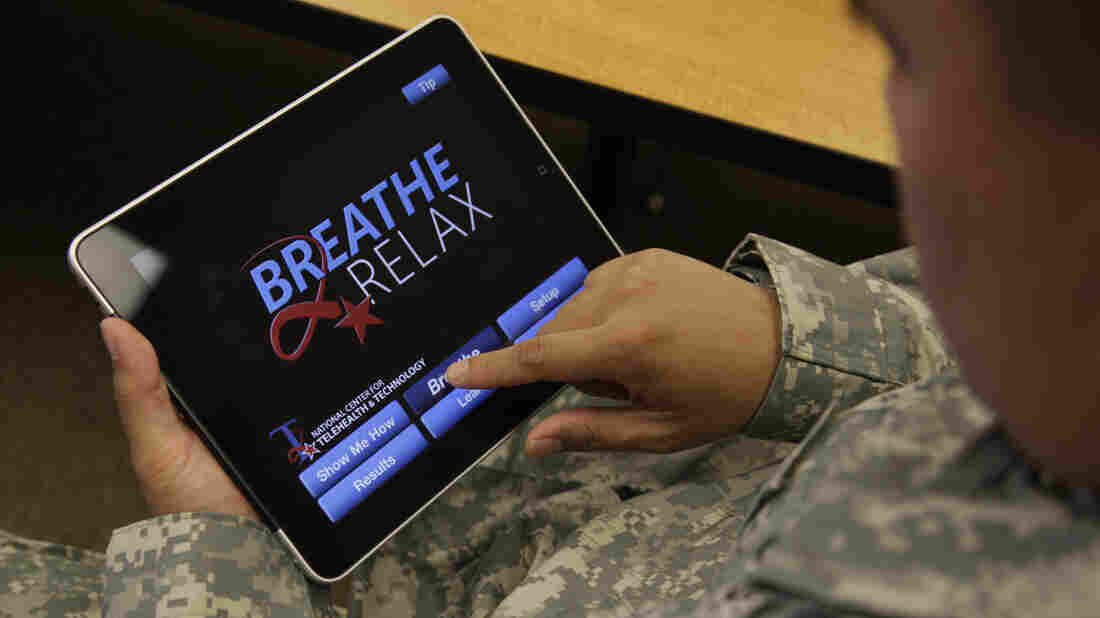 Sgt. Mark Miranda, a public affairs specialist at Joint Base Lewis-McChord in Washington state, demonstrates the use of a program in July 2011 that was designed to help calm symptoms of post-traumatic stress and traumatic brain injury. A new class of apps is offering more sophisticated mental health help to struggling teens, including emergency, 24/7 connection to counselors. Ted S. Warren/AP hide caption 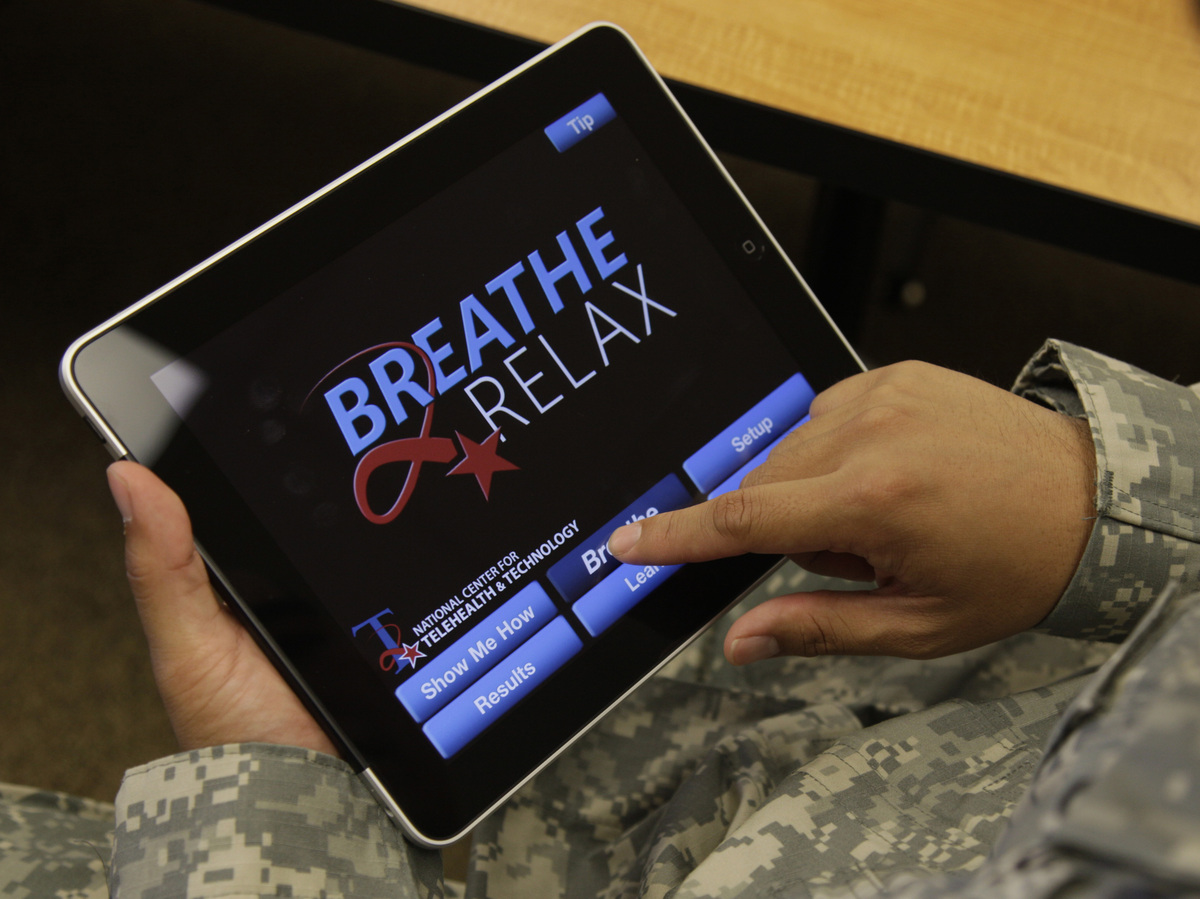 Sgt. Mark Miranda, a public affairs specialist at Joint Base Lewis-McChord in Washington state, demonstrates the use of a program in July 2011 that was designed to help calm symptoms of post-traumatic stress and traumatic brain injury. A new class of apps is offering more sophisticated mental health help to struggling teens, including emergency, 24/7 connection to counselors.

Twelve years into a struggle with bulimia and anorexia, Jessie Joachim says she still feels guilty whenever she tells her therapist out loud that she has purged a meal.

But a smartphone app designed for people with eating disorders and body image issues has given her another way to stay accountable: Along with seeing a therapist each week, she uses the app to record whether she purges or restricts how much she eats each day and completes exercises that teach her new coping strategies — all while exchanging messages with a coach trained and certified in cognitive behavioral therapy (CBT).

The programs promise to open new avenues for those who, like Joachim, want or need more mental health care but — because of high service costs, logistical hassles, struggles with stigma or other obstacles — would not otherwise get it.

Many focus on crisis intervention — including DoSomething.org's Crisis Text Line, which provides teens free, round-the-clock access to trained counseling and referrals — as well as Mood 24/7, which lets people send a daily text message about how they feel to a doctor, therapist or loved one.

The CodeBlue app, scheduled to launch this spring, is designed to help teens alert members of a designated support network with a text message whenever they feel acutely depressed.

Lantern, the subscription-based Web and mobile service that Joachim has been testing for free, is set to release its eating disorder program in February for $33 to $75 a month. It has spent months testing on college campuses, where psychological problems have shot up some 28 percentage points between 2000 and 2010.

Among high school and college students, psychopathology is now five times more prevalent than it was in 1938, research shows, and depression is the top cause of illness and disability for 10- to 19-year-old boys and girls, the World Health Organization reports. While tech-based interventions may not reverse the growing prevalence of mental issues that young people are dealing with, they have the potential to help "build better programs that are more individualized and tailored," says Megan Jones, an assistant professor at the Stanford School of Medicine and Lantern's vice president of research and programs.

But concerns about people's data mean the programs face an uphill battle toward widespread adoption.

"There are a lot of therapists out there that are worried about security and privacy of their clients," says San Francisco psychotherapist Gayle Paul.

There's also the danger that a smartphone or tablet could obscure something that a specialist might spot only in person — a telling tone or gesture, for example, that could portend a pending mental crisis.

And when used alone, some experts warn, certain apps could be inadequate because some people also need the in-person dynamic provided by a therapist. Even Joachim, who admits that she sometimes feels ashamed and embarrassed when talking to hers, says it has been crucial to her recovery.

Proponents say the upside for some patients is that they can gain access to resources they've never had. As it may be ease the way for young individuals, for whom texting has become the dominant form of communication.

"As a therapist," says Jones, "you're taught to meet someone where they are, and so that's part of why tech-based tools are a good place to start."

Indeed, experts say the idea is not to replace traditional therapy with tech — even though some research shows that online CBT can be as effective as therapy in a clinical setting — but to extend therapy's impact.

And there's evidence that some countries are taking these programs more seriously. There legislative efforts to have U.S. schools perform mental health screenings that incorporate technology, and in November, British officials and leaders at the U.K.'s National Health Service endorsed the prescription of apps to teens suffering from depression and anxiety.

"When you're looking at providing access to care, digital is going to be a huge advantage," says Jamison Monroe, founder and CEO of Newport Academy, which operates teen treatment centers in the U.S. for different disorders. "You're going to be able to deliver more care to more people."