Accessibility links
Nancy Grace Says 'Gone Girl' Satire Was Flattering, Made Her Laugh Out Loud Gone Girl fictionalizes the controversial cable news star. "I did not go into this to win a popularity contest," says Grace, host of a true crimes and current affairs show on HLN. 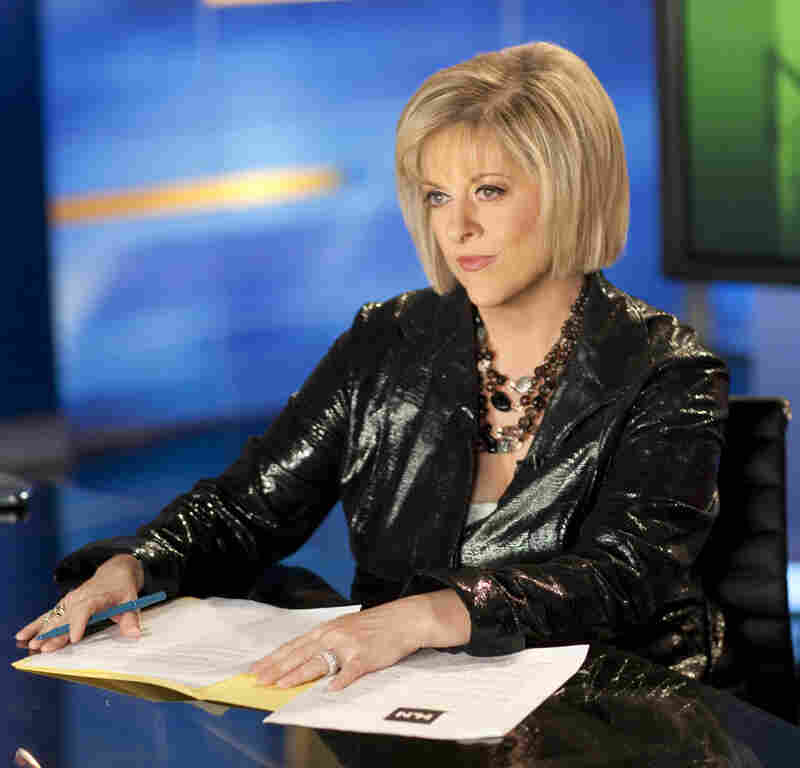 Among those hoping for an Academy Award nomination on Thursday are the producers of the Fox Studios thriller Gone Girl. The film centers on marital strife, a mysterious disappearance and the murder investigation that ensues.

Gone Girl contains, however, a knowing critique of how the media operate during moments of scandal. The sharpest satire is of a fictional cable host named Ellen Abbott who serves as a televised Greek chorus throughout the movie. Abbott calls one prominent defense lawyer the "patron saint to wife killers everywhere"; at another point, she contends that the husband, played by Ben Affleck, is not demonstrating enough pain. "The hallmark of a sociopath is a lack of empathy," she asserts, twisting the rhetorical knife.

Any resemblance to HLN's real-life cable host Nancy Grace is purely intentional, says Missi Pyle, who portrayed Grace's fictional doppelganger in Gone Girl. She says that director David Fincher made that clear from the outset.

And Pyle says she knew exactly how she would play the part. "I tend to think of an exaggerated personality: someone who's loud, Southern, and somebody, you know, who's just not really afraid of what anyone thinks," says Pyle, a Texan. "Someone who's got a mind of her own."

And Pyle said she delighted in the atmospherics.

"Trish, the costume designer, she was so excited because Nancy wears a lot of leather, and she wears a lot of loud clothing," Pyle recalls. "I got to wear all those leather jackets — bold print pants — and get my hair really big and a lot of makeup. So it was really fun to do that. And that kind of also put me into the character."

But there is a more serious side to depicting Grace — both in her advocacy for victims and the substantive criticism of her.

Like Grace, Gone Girl's Abbott seemingly investigates, indicts, tries and convicts suspects relentlessly, night after night on TV. She comes across as an interviewer who doesn't weigh opposing arguments but combats them.

Pyle says she watched Grace's show repeatedly with a friend who's a die-hard fan. She earlier played a version of Grace on CBS's The Mentalist. And Pyle says she now instinctively understands the part.

"I think she sees herself as someone who's very pivotal to getting justice done. The word 'justice' is constantly something that she is thinking or saying," Pyle says. "It's the idea of finding righteousness or justice for someone who can't speak for themselves is her role."

You might think Grace would bristle at the depiction. But Grace says she and her husband laughed throughout the movie.

"Well, I guess they kinda got the hair right. I imagine the black leather jacket was right. The Southern accent was a little over the top but it was pretty good."

Nancy Grace on the fictionalized depiction of her in 'Gone Girl'

"Well, I guess they kinda got the hair right," Grace says. "I imagine the black leather jacket was right. The Southern accent was a little over the top but it was pretty good."

And Grace says Gone Girl gets her combativeness on TV more or less right, too, though she characterizes it as fierce advocacy for victims. Grace has cited the murder of her fiancé more than three decades ago as the inspiration for her earlier career as a prosecutor and her subsequent appearances as a commentator and host.

That has come with public criticism and even lawsuits claiming she cynically casts aside the presumption of innocence in pursuit of ratings and heat.

She takes credit for turning national attention on Casey Anthony, a Florida woman suspected of and then tried for killing her young daughter. After Anthony's acquittal, Grace said, "somewhere out there, the devil is dancing tonight."

Grace settled a lawsuit in 2010 filed by the estate of a woman who committed suicide shortly after taping an interview for her show. The woman's son was missing and Grace strongly suggested the woman might bear some responsibility. She settled another lawsuit last year after making statements a judge found to be patently untrue about another high-profile murder case involving Michael Skakel.

While we did not explore those legal claims, Grace says she is not constrained by the same rules she faced as a prosecutor in her current incarnation as impassioned televised advocate.

Grace says the scenario in Gone Girl most closely reminded her of the case of Scott Peterson, a California man who feigned concern about his missing wife. A jury convicted him of murder after her remains were found.

But Grace says she has enjoyed earlier sendups — on NBC's Saturday Night Live and elsewhere — and is appreciative that she is worthy of skewering.

"I laugh — laugh out loud at it. And so does my family. And so does my husband," Grace says. "I did not go into this to win a popularity contest. I do not expect to be crowned Miss Congeniality, OK?

"If that were what I was looking for, I would have gone into a different line of business."