Accessibility links
Book Review: 'The Just City' By Jo Walton| In Jo Walton's new novel, the goddess Athene assembles a history-spanning group of thinkers and sets them to creating Plato's famed Just City — but then she makes the mistake of inviting Socrates. 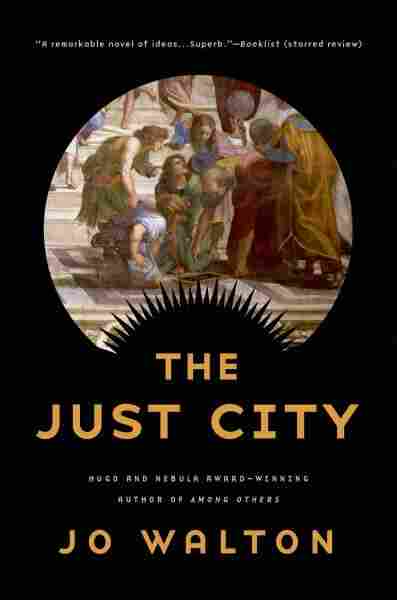 A friend recently insisted I read her favorite book in the world: The Last of the Wine by Mary Renault. It's a gorgeous book, one that utterly immerses you in a worldview that's simultaneously alien and formative to so much of our modern life. I enjoyed it tremendously, and am doubly glad I read it since it gave me a fascinating window through which to view Jo Walton's The Just City: If Renault's project is immersive, Walton's is explosive, deliberately troubling and provocative as the gadfly-Socrates who appears in both.

The god Apollo is baffled by the fact that Daphne, a nymph he was pursuing, preferred to turn into a tree rather than have sex with him. He asks Athene to explain to him the truly astonishing fact that a woman wouldn't want to be his lover. Athene introduces him to the idea of consent, and in a bid to understand things like "volition" and "equal significance" he decides to become mortal. But when and where should he live out his mortal experiment? Athene suggests he try Plato's Republic.

It turns out that Athene is trying out an experiment of her own. Throughout time and space, whenever anyone prays to her for a chance to live in the Just City of Plato's Republic, she scoops them up, and sets them to making it happen. At the edge of a dormant volcano destined to explode, utterly separate from any surrounding civilization, Athene gathers Neo-Platonists, Greek concubines, people from the Renaissance, the 19th century, the 20th and further into our own future: Anyone who read The Republic in the original Greek and prayed to Athene to go there will get that chance.

We're given three points of view: Simmea, one of the slave-children purchased and raised as a free citizen in the Just City; Maia, a Victorian-era woman who becomes one of the city's founders; and Apollo, who begins as a god but for most of the book is a child being raised in the Just City along with Simmea. Through them, we learn the history, progress and problems of the City, and the various ways in which those problems are addressed — or aren't.

I devoured this book. Walton's no-nonsense prose and dialogue are the kind of thing I can read anywhere, in any situation, and fall into a world of intelligent people speaking to each other intelligently in interesting ways. In this sense, the book's as immersive as Renault's — the detail of life lived in the Just City is mesmerizing, and Simmea's perspective in particular is wonderful, her thoughtfulness and honesty just shining through her every interaction in ways that create fascinating, difficult counterpoints to the characters with whom she interacts.

But as Liz Bourke observed on Tor.com, this is a novel that wants you to argue with it. Like a Socratic dialogue, it lures you into narrative traps and seems to watch as you struggle with your own ethics in response to it. The Just City shows you a group of very different people coming together to transform a philosophical thought experiment into reality, determining how far to follow the letter of Plato's laws, where to accommodate their spirit, and what to do when the robots they've borrowed from the future to do their grunt-work develop sentience.

One of the quotes that opens The Just City is Renault's Socrates speaking in The Last of the Wine: "Yes, I know, Plato; but if you always take the steps in threes, one day you will miss a cracked one." The Just City shows you the cracked step — and I'd be very surprised indeed if Walton didn't also include it to reflect current discourse around "missing stairs," those members of a community whose bad behaviour is tolerated even as everyone quietly warns newcomers about them. Rather than fix the proverbial cracked step, one becomes accustomed to leaping over it and instructing others to do the same; think of all the "we thought everyone knew about Jian" discussions that happened in the wake of radio host Jian Ghomeshi's dismissal from CBC amidst allegations of sexual misconduct.

There are several such cracked steps, such missing stairs, in The Just City, where even rapes are carried out like arguments about philosophy, and are made all the more devastating as a consequence. Apollo's quest to understand consent is a theme throughout the narrative, and recurs in profoundly unsettling ways.

This is the first book of a planned trilogy, and given how this one ended — not so much hanging off a cliff as careening off its edge into the sea — I'm desperate to read The Philosopher Kings when it comes out in June. Brilliant, compelling, and frankly unputdownable, this will do what your Intro to Philosophy courses probably couldn't: make you want to read The Republic.