Accessibility links
Voters Said Yes, But D.C. And Congress Continue To Spar Over Pot In November, District of Columbia residents voted to legalize marijuana. Still, the measure's status remains in flux while the city fights against Congress for autonomy on the issue. 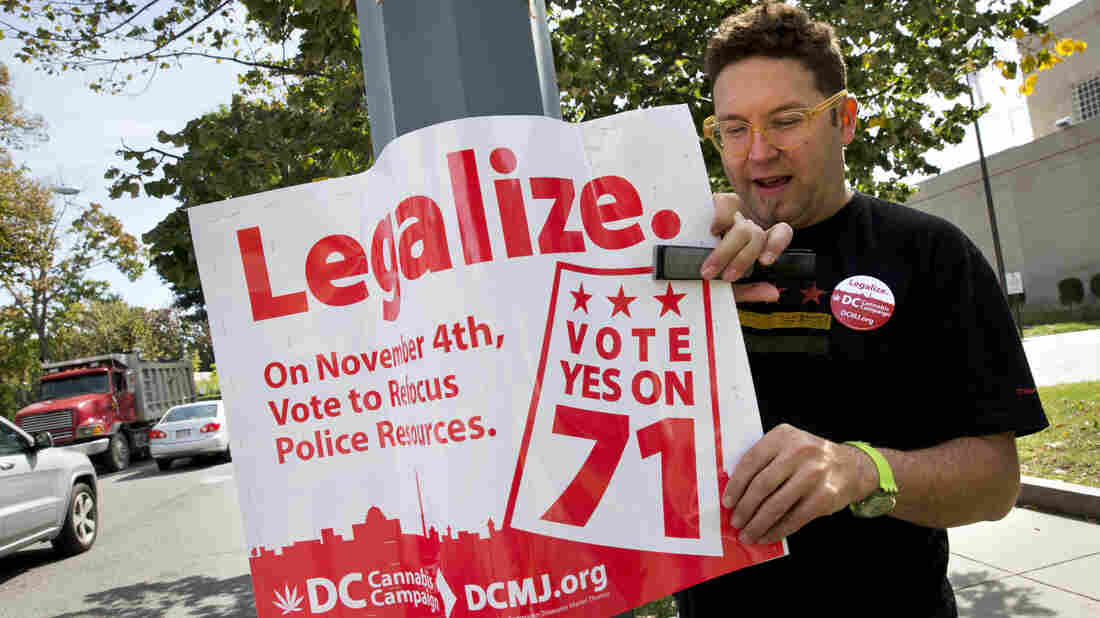 Adam Eidinger, chairman of the D.C. Cannabis Campaign, puts up Initiative 71 posters in October. The measure to legalize possession of up to 2 ounces of marijuana was approved by a wide margin of local voters. Jacquelyn Martin/AP hide caption 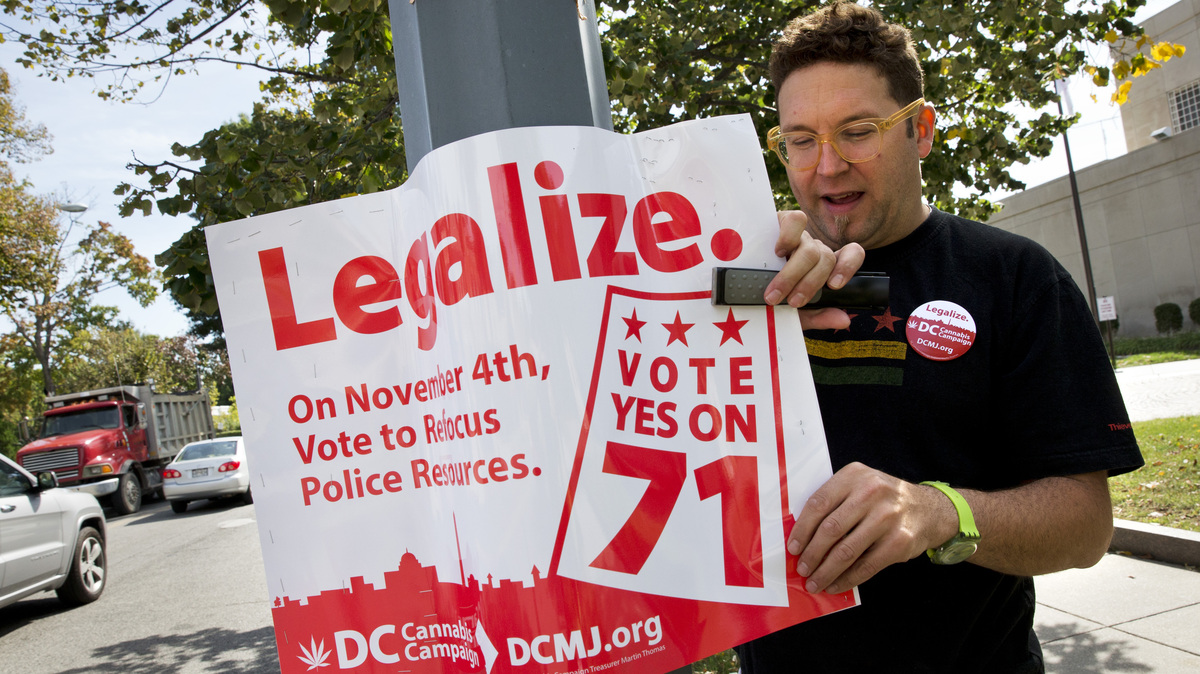 Adam Eidinger, chairman of the D.C. Cannabis Campaign, puts up Initiative 71 posters in October. The measure to legalize possession of up to 2 ounces of marijuana was approved by a wide margin of local voters.

More than 115,000 District of Columbia residents voted in favor of a marijuana legalization ballot initiative in November, putting 70 percent of the city's voters behind the measure that permits residents to possess up to 2 ounces of pot and grow their own.

But a month later, it took only 219 House votes and 56 Senate votes to throw the initiative's future into doubt and rekindle a longstanding fight between Congress and the city over how much power it has to govern itself.

David Grosso, a member of the D.C. Council, said congressional meddling — like the move in December to block D.C. from implementing the voter-approved legalization measure — is par for the course. "I grew up here, so I said, 'Here we go again,' " he says.

"It's been the same thing over and over and over, where Congress thinks that they can meddle in our business and basically use us as a sort of petri dish where they do things to us that they could never possibly do in their own jurisdiction — they'd be thrown out," Grosso says.

Despite having an elected legislature and mayor, the District remains a federal city controlled by Capitol Hill. That means that Congress often weighs in on social issues like guns, drugs and abortion.

Andy Harris is a Republican congressman from Maryland's Eastern Shore, and has led the effort to stop the District from legalizing marijuana. He says that he's concerned about the health impacts that legalization could have on children. As to the accusations that he's interfering in local District affairs, he says that the Constitution allows him to.

Maybe, but Miguel Oyola, who lives in suburban Virginia outside the District, says it's unfair that the city's residents can be overruled by Congress, especially a Congress where they have no voting representation.

"I think the city has really spoke to what they want," Oyola says. "And I think it's just really unfortunate the kind of position we're in right now with Congress and the back and forth with the House and the Senate and just really trying to push through what the people of the city have already kind of spoke up on."

Grosso is more blunt about it.

"Most Republicans want less federal government, they want less intrusion, yet here they are, every single day of the year, thinking about how they can mess with us. They're just purely hypocritical, but that's no surprise," the D.C. Council member says.

D.C.'s Marijuana Legalization Is Part Of Debate Over Spending Bill

It's no surprise, he says, because it isn't new: In 1998, Republicans stopped the legalization of medical marijuana in the District, despite it being approved by 69 percent of voters. It took 11 years until the prohibition was lifted, and now over 2,000 residents use medical marijuana.

D.C. officials are fighting back on marijuana legalization, saying they believe that Congress can't stop the voter-approved measure from taking effect. Adam Eidinger led the campaign for legalization, and says that it has generated new energy in the fight for autonomy.

"I think we have been wounded here," Eidinger says. "But sometimes it takes being attacked to get people to respond and do what they should have done all along and stand up for their rights."

Harris, the Republican congressman, says that if the District moves forward on legalizing the possession of marijuana, House Republicans should consider suing the city. But even with that threat hanging over D.C.'s head, Grosso is going a step further: This month he introduced a bill in the city council that would allow retail sales of marijuana in the nation's capital.