Accessibility links
Book Review: 'Honeydew,' By Edith Pearlman Reviewer Alan Cheuse has rapturous praise for Edith Pearlman's new story collection: "The first thing I wanted to do after finishing was, well, I wanted to go right back and start from the beginning."

Delicious Short Stories, Ripe On The Vine In 'Honeydew'

Delicious Short Stories, Ripe On The Vine In 'Honeydew' 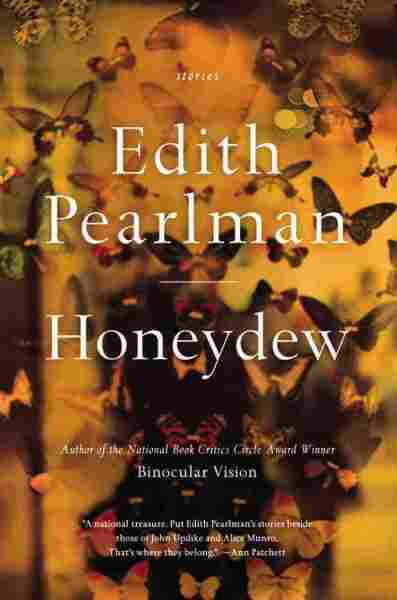 Prize-winning short story writer Edith Pearlman has just come out with a new collection of short fiction, called Honeydew. And the first thing I wanted to do after finishing my initial reading of these 20 stories was, well, I wanted to go right back again and start from the beginning.

But instead, I've put my own rereading on pause so I can tug at your sleeve about this marvelous talent who moves among us. Here is one of our best living short story writers, and with Honeydew, her fifth volume, her reputation is gaining serious velocity.

Pearlman begins with a Chekhovian sense of form, and leaps from there to giddy moments of deep pleasure and insight reminiscent of the best of Malamud and Eudora Welty and Saul Bellow, sometimes doing pushups, sometimes cartwheels around the nature of love and hope, age and youth, pain, sorrow, disappointment, and even the antics of small insects and the nutty pleasures of adultery.

Look at "Hat Trick," a surprising story about love and fate that moves back and forth in time, from a giggly gathering of teenage girls in the 1950s in Godolphin, Mass. (the imaginary Boston suburb where Pearlman often sets her tales), to their respective marriages over the years to come; then focus on "Puck," set in a Godolphin antique shop in which a statue of the mischievous sprite who blinds would-be lovers with strong potions becomes an object of great value to some hopeful and needy customers.

Dive into "Wait and See" about a wunderkind who observes colors beyond the normal chromatic spectrum, and luxuriate in the title story, "Honeydew," which ranges far and wide in just a few astonishing pages — from the classrooms and campus haunts of a New England high school to the Biblical desert — into the private life of an anorexic teenage girl, and the love lives of a group of serious and somehow delirious adults.

I can point out at least another dozen stories from this one book that I want to urge you to read, some beginning in relative simplicity, some with a rhetorical flourish — as in the first lines of "Assisted Living":

"This Yefgin — what a rogue! Leather battle jacket ... and a circlet of gray hair lying loose on his head just as if it were a wig. ... When Yefgin addressed a woman he kissed her hand first, then twisted his face into a grin that suggested he'd just conceived a helpless passion for her even though they'd just met only minutes ago, such things happened all the time in Turgenev."

In Turgenev, sure. But not so much in contemporary American short fiction, which adds all the more to the pleasures of reading Pearlman. She has a keen classical sense of form, but she never shies at straying into the joy-filled turns of language that leap off the page. And she never turns her back to possibility, to enlarging the scope of a story until — as in the title piece — it appears to be taking place on the wide proscenium stage of eternity.

Ah, Edith Pearlman! Like the great writers on whose shoulders she stands, she works her paradoxes upon us. Like that young boy in her story "Wait and See," she perceives colors far beyond the normal spectrum, and helps us to see along with her. She presides like Puck, over a world more antic and beautiful than we ever might have imagined on our own, blinding us with the strong potions of her art.