Accessibility links
Love, Sex And Power In A World Of Women The drama The Duke of Burgundy follows two women in a complex tale of love and power, taking place in a town mysteriously without men. 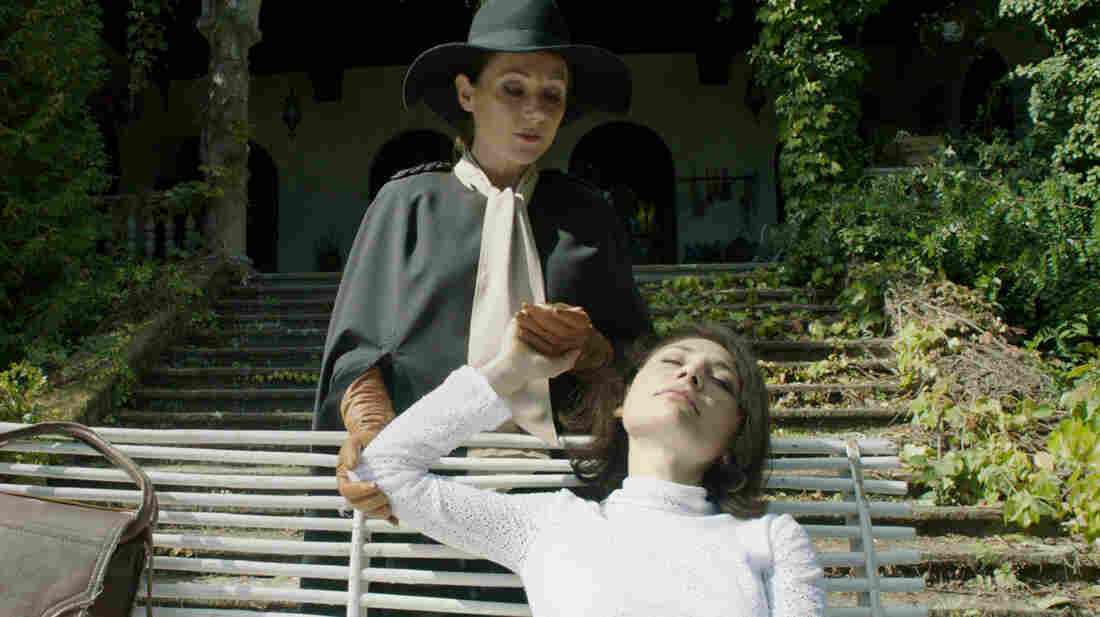 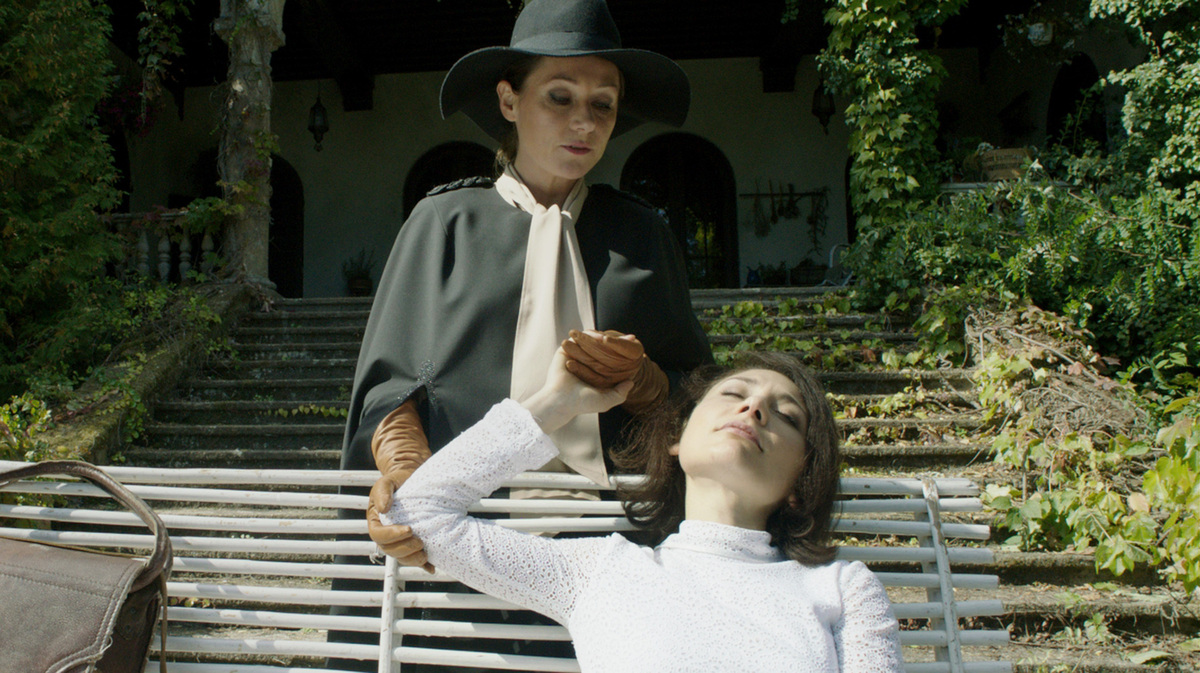 The Duke of Burgundy takes place in a town without any male presence. Where the men have gone, writer-director Peter Strickland won't say. The absence is never mentioned, it only helps accentuate the otherworldliness of wherever the film is set: some facsimile of Earth that first seems right out of a fairy tale as we watch a caped Evelyn (Chiara D'Anna) bike into a quaint small town to the cheerful sound of the soundtrack from alt-pop duo Cat's Eyes. When Evelyn arrives at an elegant, ivy-drenched home, Cynthia (Sidse Babett Knudsen) welcomes her with a cold "you're late" and orders her around like a prickly mistress would Cinderella.

None of this, though, is at it appears. Instead, Cynthia's orders to have Evelyn clean the house and wash her underwear are part of their tightly-scripted roleplaying, a sexual fantasy that Evelyn not only fully understands, but also, as we glean later from the detailed instruction cards that she leaves for Cynthia, fully controls. The twist is foreshadowed by Strickland's allusion to 1970s European softcore films in the opening credits, but it exemplifies how the film marvelously, and repeatedly, opens up in surprising new directions.

Case in point: Evelyn and Cynthia's relationship is also a veneer, a superficially provocative way to guide us into the film's central love story, one about compromise, passion, and jealousy. The Duke of Burgundy moves gradually but naturally toward this emotional territory. The housemaid routine is one that Cynthia and Evelyn repeat frequently, but the second time we see it, there's a hint of boredom in Cynthia's eyes, and as Evelyn is cleaning Cynthia's boots, she has to knock on the door to get Cynthia to move along to the next part of the script.

The two, it becomes clear, are pushing further into a rut, one that Evelyn hopes to avoid by exploring new types of kink (she finds a large trunk that she gets Cynthia to lock her in at night). Cynthia, though, yearns for a different connection. When, one morning, Evelyn says to Cynthia, "Tell me something," Cynthia replies: "I can start with how much I love you, and how happy I am that you're here with me." But Evelyn was after something else. "Talk about the other things," she requests coyly, and Cynthia complies: "I'm not happy with you at all," she starts, as her hands and Evelyn's slide under the covers.

The superficial control that Cynthia exerts over Evelyn sexually contrasts with her lack of emotional power. From that conflict, Strickland expertly weaves a psychological drama—a push and pull for domination—that, in D'Anna and Knudsen's hands, never descends to mere gameplay; there are always real emotions at stake, in part because both actresses are so good at channeling their characters' insecurities. (Evelyn, for her part, regularly makes exaggerated efforts to show off her intelligence while accompanying Cynthia to lectures at an entomology institute.)

Strickland hides much beneath the surface in The Duke of Burgundy, but the movie is also a delight to look upon; it's the kind of lavish project that calls for recognition of the sound designer (Martin Pavey), production designer (Pater Sparrow), and costume designer (Andrea Flesch) by name. As shot by Strickland and cinematographer Nicholas D. Knowland (who worked together on Strickland's previous film Berberian Sound Studio), the colors of Cynthia's house decorations glow and the textures of Cynthia and Evelyn's lingerie seem to glide through your fingers. Meanwhile detailed sounds like Cynthia's skirt rubbing against her tights as she raises it give the film its sensuality — as opposed to nudity, of which, remarkably, there is none.

Visually, Strickland moves in some surprising directions. A number of late scenes late in the movie—in particular a nightmarish dream sequence—have the dark look and sound of a horror film, with Evelyn and Cynthia resembling demonic mannequins. Some of these more abstract moments work wonderfully to leave us unsteady—unsure about the world in which the movie takes place, about where the film might be headed.

It's less clear how they fit with the love story that runs alongside them. Strickland at times appears caught between two movies—one driven by mood, the other by character. He develops each with equal precision and success, but they nevertheless don't always feel of a piece. Still, if the movie is something like a meal of mismatched courses, it's also one that's never anything but a pleasure to eat up. Incongruity, after all, is at the heart of one of the film's central accomplishments: crafting a world that seems foreign, mysterious, and yet, through its central relationship, messily, recognizably human.