Accessibility links
It'd Be No 'Folly' To Remake This Musical Classic Now that the Stephen Sondheim musical Into the Woods has made more than $100 million at the box office in just three weeks, NPR's movie critic Bob Mondello has a modest musical proposal. 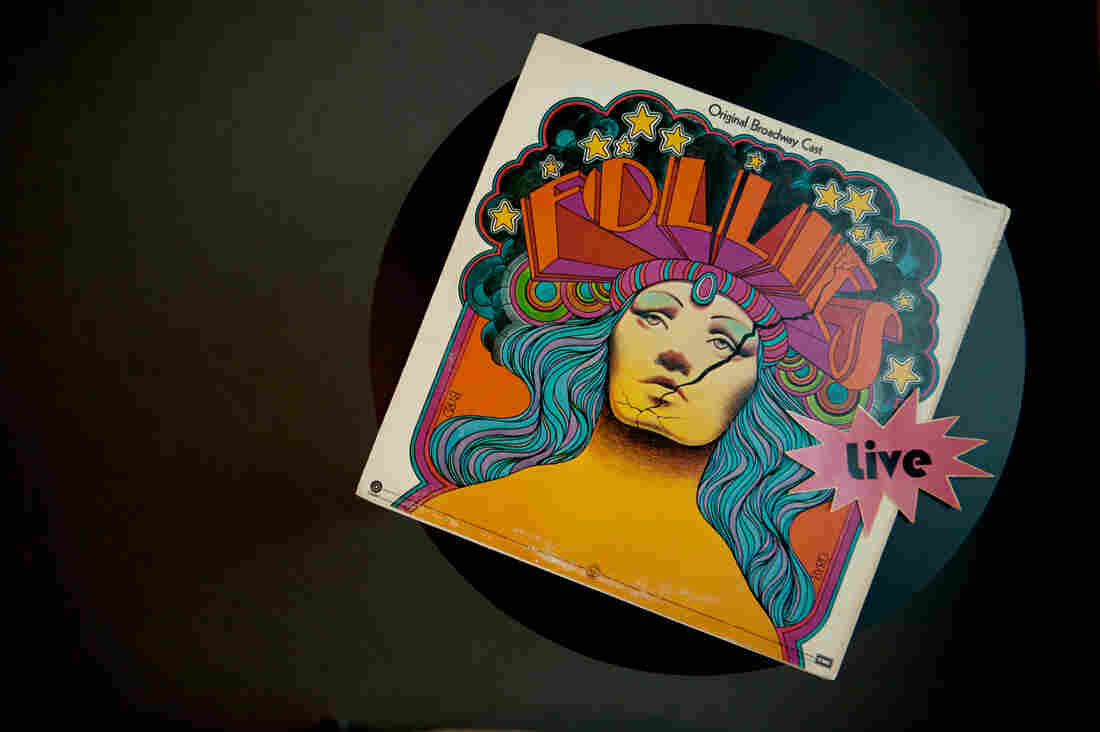 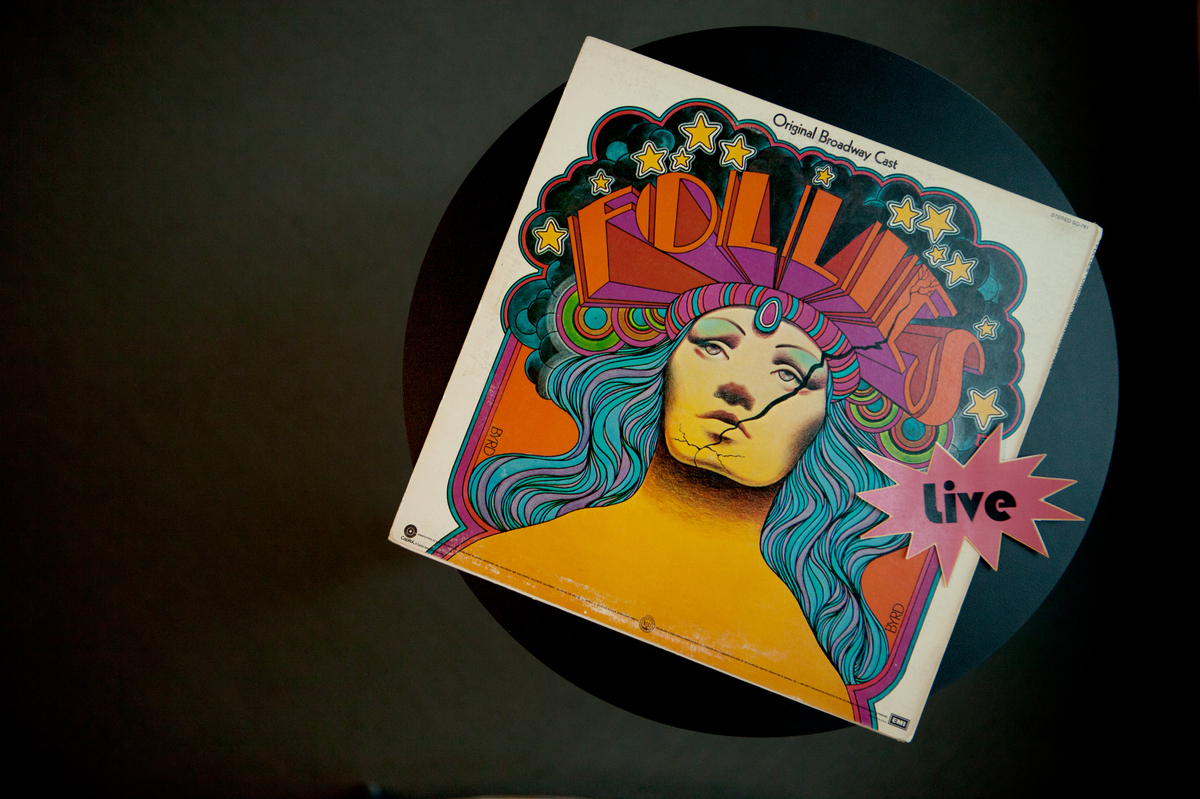 Bob Mondello brought in his own personal copy of the original Follies cast album — intern Patrick Fort added the starburst.

For fans of musical comedy, last month was a big deal. Peter Pan Live played to more than 9 million viewers on TV, and Stephen Sondheim's Into the Woods was seen by another 9 million in just its first week in movie theaters. That's 18 million musical comedy fans — more than all of Broadway plays to in a year.

So why am I grumpy rather than smiling? Well, for starters, can we agree that Peter Pan Live was a waste of time? There's already a better version with Mary Martin. Same with The Sound of Music with Julie Andrews, and The Music Man with Robert Preston. No offense to Allison Williams, Carrie Underwood or Matthew Broderick, but there's no good reason to do them again less well.

But Stephen Sondheim finally hitting it big in movies is a different story altogether, and the combination of both these productions having enormous audiences at the same moment makes me dream of a TV/Sondheim mash-up. For years people have been saying Sondheim's shows are too tricky to be turned into films, too sophisticated for a mass audience. Well, we've now established that that's not true: His blood-soaked musical Sweeney Todd made a fortune at movie theaters, and Into the Woods has more than matched Sweeney in its first few weeks.

So here's my mash-up: a live TV musical that's not just a singalong retread. Instead, how about a less familiar but far more rewarding show? Something so star-studded, and ratings-guaranteed, that it would do fresh, updated justice to what many consider Stephen Sondheim's greatest musical ever.

Indulge me for a moment while I play "Fantasy Follies."

The original Follies, directed by Hal Prince and choreographer Michael Bennett before Bennett became celebrated for A Chorus Line, was nominated for 11 Tony Awards in 1971 and won seven on the way to losing its entire investment on Broadway. It has, however, become a success d'estime with frequent, star-studded revivals.

The show is set at a reunion of aging chorus girls who in their youth had appeared together in a Ziegfeld Follies-style show. It centers on two now-mature chorus girls, and the stage-door Johnnies to whom they are unhappily wed. Audiences came to see a cast filled with celebrated stars from previous decades — Yvonne de Carlo, Alexis Smith, Dorothy Collins — and were more than a little surprised at what Sondheim had them doing up there onstage: singing songs like "Losing My Mind" about a past they remembered not with nostalgic fondness but with regret for the roads they didn't take. Also singing with bite and bile about the roads they did take in songs like "Could I Leave You?"

It was sensational. Gorgeous. And it'd make a sensationally gorgeous vehicle today for a dream team that no producer could ever gather for a long run on Broadway but that would certainly be possible for one night on TV. Imagine bringing together all the folks who were huge in movie musicals a few decades ago — Angela Lansbury, Carol Burnett, Diana Ross — stars who could really do justice to Follies' big anthem, "I'm Still Here," a declaration that aging stars of whatever era almost can't help making.

Say, Sweet Charity's Shirley MacLaine, back before she arrived at Downton Abbey. Or The Good Wife's Christine Baranski (who'll be appearing on stage in a London Follies in a few months). Singin' in the Rain's Debbie Reynolds altered a few lyrics ("I waved at Lana, Ava and June / sang Abba Dabba Honeymoon / I got some mileage from that old tune ...") while adopting a brighter mood in her nightclub act. Goldfinger's Shirley Bassey did it brassy. For Nacha Guevara, "Aqui Estoy" was a way to announce her return from exile after the fall of the Argentine dictatorship. And in a mash-up with "Don't Rain on My Parade," Babs made it all about herself ("I've heard 'em say songwriting, acting, producing / why does she think that she can? / Or better yet songwriting, acting, producing / what does she think, she's a man?").

In my head, I see all of them dancing with their younger selves in the the big mirror dance in Follies, but bigger than onstage, because on TV you could do it Busby Berkeley style — dozens of young chorus girls paired with the likes of Ann-Margret and Chita Rivera from Bye Bye Birdie, Bette Midler, Diahann Carroll, Doris Day. For the song "I'm Just a Broadway Baby," you could trot out Carol Channing. I mean, it's just one night on TV. For a lot of the supporting players, it'd be just one number.

I hear you asking: Why?

Why the fuss about Sondheim? Well, because he's a genius — the Shakespeare of composer-lyricists — and anyone who can toss off an interior rhyme like "we have so much in common, it's a phenomen ... on" deserves to be celebrated more widely.

And why bring back these theoretically past-their-sell-by-date stars? Well for one thing, when I first mentioned this idea around the office, our interns had never heard of most of them, and that's a shame, no? Blank stares for Shirley MacLaine. Ann-Margret, Shirley Bassey. They knew vaguely who Streisand was, but Debbie Reynolds? Nothing, even after I said Singin' in the Rain.

I'm not criticizing. This is exactly the reaction I had in my 20s to the big star of the original Follies, Alexis Smith. I had no idea who she was. Went to see her purely out of curiosity, and I'm glad I did. In short, there's a reason to bring them and Follies back, unlike whatever the logic was for redoing Sound of Music or Peter Pan.

And it's not as if the show isn't pop, or accessible. It's amazing how many major stars have incorporated Follies songs into their nightclub acts. Liza Minnelli, for instance, did a ghastly disco version of "Losing My Mind" with the Pet Shop Boys. Even The Rocky Horror Picture Show's Tim Curry has done that song.

And for other parts, in my head I see Nathan Lane, Morgan Freeman (don't tell me he can't sing — remember The Electric Company?), Glenn Close, Julie Andrews.

Admittedly, Follies is not a happy show. But, y'know, neither is Les Miz, or Rent, or for that matter, Sweeney Todd. And with even half this kind of star power, audiences would stick with it to the deliciously bittersweet end. Seriously, although I'm just playing Fantasy Follies here, this idea is not pie in the sky. TV musicals don't have to be chirpy, kid-oriented, lowest common denominator shows. And if anyone in the world knows that, it's Craig Zadan — the guy who produced the live Sound of Music and Peter Pan. He's no stranger to Sondheim. He literally wrote the book on him, back when Follies was still brand new. It was called Sondheim & Co. And he's worked with a lot of these stars in the years since.

He could do this. He could bring back what one of the show's big numbers calls "these beautiful girls." At which point, like a lot of other people, I'd be losing my mind.

Michael Bennett was both choreographer and co-director of Follies. In an earlier Web version of this story, only Hal Prince was credited as director.