Accessibility links
Southern California's Water Supply Threatened By Next Major Quake As if the drought weren't bad enough, four of the area's aqueducts sit on the San Andreas Fault. Engineers are working to protect the water system against the next major earthquake. 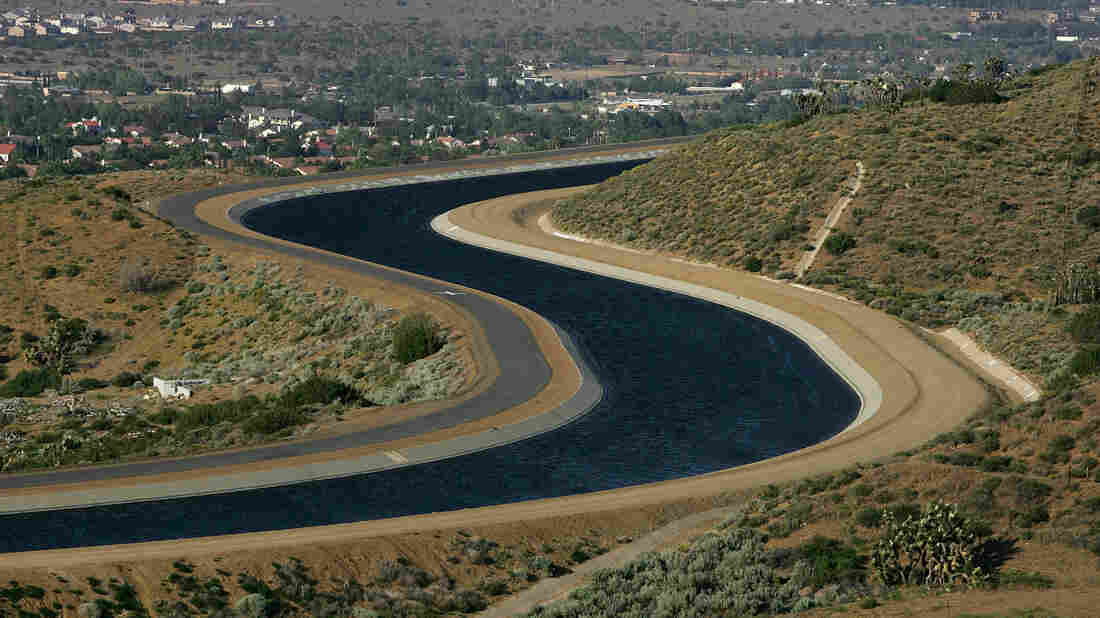 The California Aqueduct carries water from the Sierra Nevada Mountains to Southern California. It is one of four aqueducts in the region that glide across the San Andreas Fault. David McNew/Getty Images hide caption 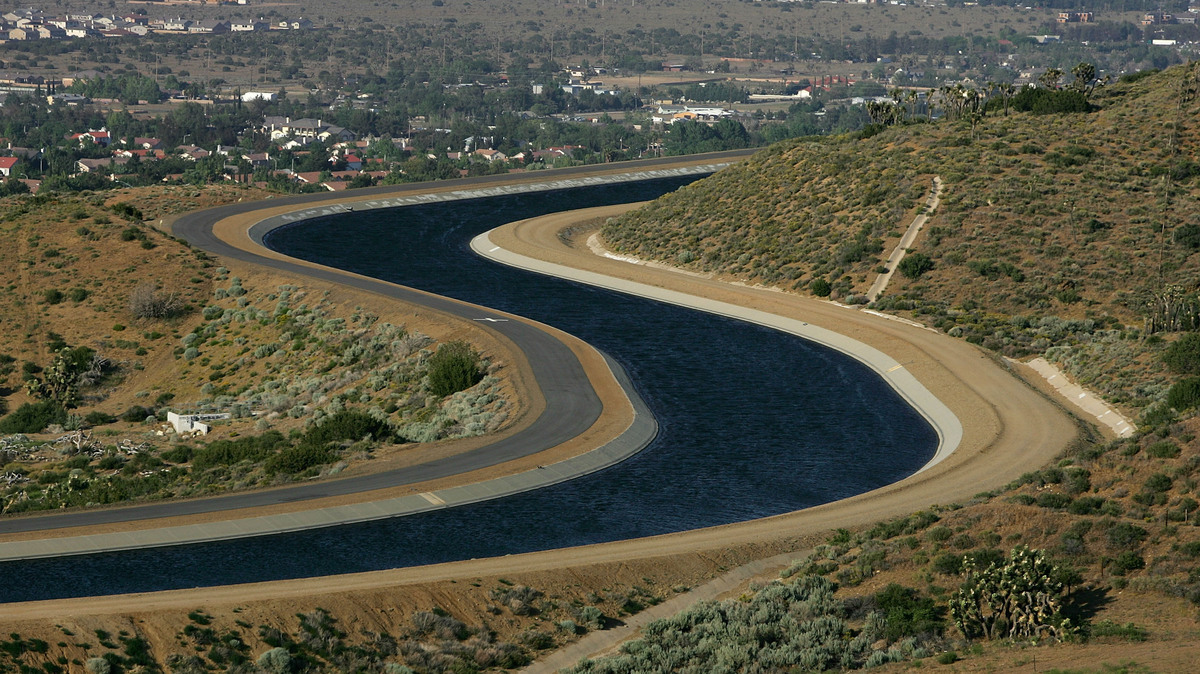 The California Aqueduct carries water from the Sierra Nevada Mountains to Southern California. It is one of four aqueducts in the region that glide across the San Andreas Fault.

Southern California gets the vast majority of its water from four aqueducts that flow from the north, but all of them cross the San Andreas Fault.

That means millions of people are just one major earthquake away from drying out for a year or more.

"It's a really concerning issue for the city of Los Angeles," says Craig Davis, an engineer with the LA Department of Water and Power, which oversees the LA aqueduct.

Research shows that a magnitude 7.8 quake on the San Andreas Fault could sever all four aqueducts at once, cutting off more than 70 percent of the water sustaining Southern California.

"Which is, depending on what counties you look at ... somewhere in the order of 18 and 22 million people," Davis says. "That's a very large number."

Studies show it would take a year or more to rebuild the waterways, and during that time, the state's economy would lose roughly $53 billion. That's bad news for Southern California companies such as Disney, Mattel and DirecTV.

But there's no way to bring water from the north without crossing this fault. So engineers like Davis are looking for other solutions.

How An Aqueduct Turned Los Angeles Into A 'Garden Of Eden'

Davis says the LA Aqueduct crosses the San Andreas Fault in a large underground tunnel that will shift and crumble in a big quake. But a high-density polyethylene pipe could survive the force.

"You can almost collapse this pipe in its entirety and still get water through this, and there are some examples of ductile pipes in similar types of fault rupture events in Turkey that actually did this," Davis says.

LA Water and Power wants to place this pipe in the existing tunnel to keep some water flowing after a major quake.

It's similar to what the San Francisco Bay Area did after its 1989 earthquake. Abby Figueroa of the East Bay Municipal Utility District says engineers placed a reinforced pipe on sliding cradles inside a tunnel.

"And we made it so that the pipeline could shift with the movement of the earth and that way it would minimize any damage," she says.

That project was paid for by a surcharge added to local water bills. LA is still looking for a way to fund its $10 million plan.

But shoring up tunnels is only part of the answer.

The Metropolitan Water District of Southern California also oversees one of the region's four aqueducts located south of LA. If it is destroyed, the Diamond Valley Lake reservoir, a man-made lake that houses water from Northern California, will come in handy.

"This is Southern California's largest surface water reservoir," says Gordon Johnson of the Water District. "This reservoir is intended to supply about six months' worth of water supply."

The Water District also wants to stockpile construction supplies, so crews can quickly build a new waterway after a disaster. But Davis says it's not easy getting these big projects off the ground.

"But because we are effectively sitting on a time bomb, we need to keep that in mind and get this done as soon as possible," he says.

Davis just hopes it won't take a major quake for officials to find the money and the motivation to get things done.