Accessibility links
Be More Awesome — With Help From Kid President Kid President (aka 11-year-old Robby Novak) is an Internet sensation whose sunny, personality-driven YouTube videos have garnered over 75 million views. Now, he's written a book on how to be awesome. 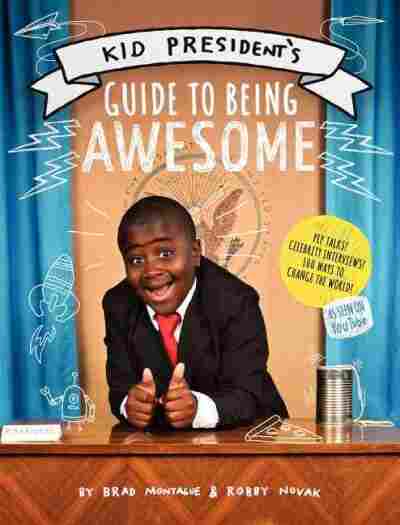 Kid President's Guide to Being Awesome

by Brad Montague and Robby Novak

Kid President has a vision for America, one of ferocious positivity. And corn dogs. Robby Novak — now 11 years old — and his older brother-in-law Brad Montague created the character in 2012.

In a series of YouTube videos, Robby appears in a suit and speaks to America from a cardboard Oval Office. He extolls the virtues of corn dogs, interprets Robert Frost, and delivers pep talks to America. The videos quickly became an Internet sensation, garnering tens of millions of views.

Now, Robby and his brother-in-law have co-written a book that comes out next week: Kid President's Guide to Being Awesome. "As much as it's been exciting for us to see the audience connect with the things we make online, you just can't hold that in your hand," Montague tells NPR's Rachel Martin. "We're really excited to sort of see how this might activate our audience to do good."

Montague on his collaborative conversations with Robby

We would go and eat lunch together and we would talk about different topics like hunger, or helping your neighbor, or different heavy things, and that's how we make the video — that's how we do everything. It's the result of a conversation between a kid and a grownup.

It's when some people break easier than other kids — like I've broken over 70 bones, which is pretty crazy ... but now, I don't break as much because muscle protects bone, and I have a little bit more muscles now.

Montague on where the pep talks came from

The original pep talk just came from a natural place in our relationship where we just encouraged each other regularly. And I wrote that first one at a time in our lives when my son had just been born, and that was really exciting, but I was tired. And Robby had just had some major breaks, and we just, we were having a rough time, so that was something that sort of came out of needing to encourage each other.

Robby on what he's proudest of in the book

[It's] "This is life, people!" This is a picture of cats, leaves, sunshine, heart raining, hands, eyes, noses. If we didn't have all that, we couldn't do nothing! Life is sometimes not fair, but we can make it fair, by making the world more awesome.