Accessibility links
A Skilled Cast Perks Up The Sweet And Funny 'Fresh Off The Boat' It's true that Fresh Off The Boat is the rare story about an Asian-American family. But it's equally important to note that it's a funny and warm comedy with a lot of promise. 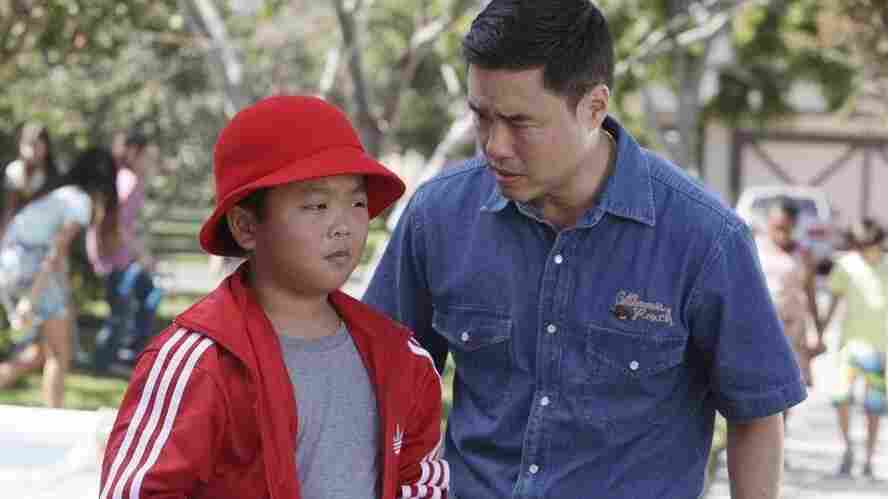 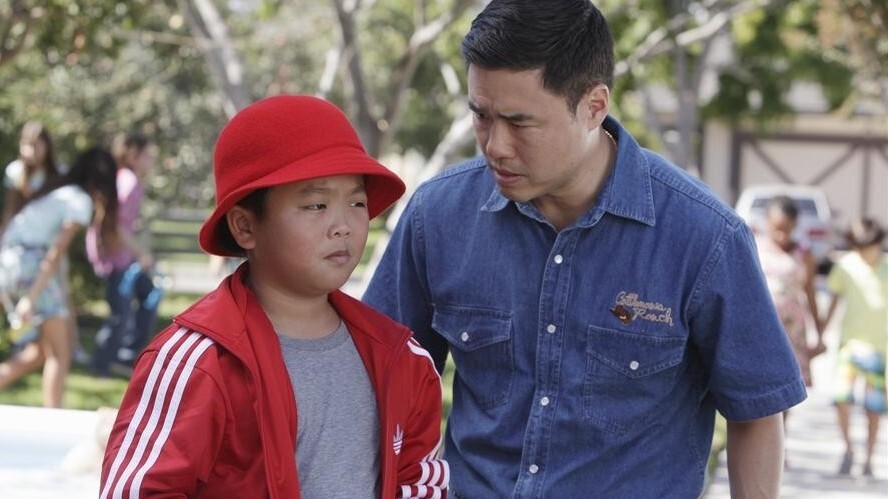 Hudson Yang and Randall Park play Eddie Huang and his dad, Louis, in Fresh Off The Boat.

Fresh Off The Boat, a comedy premiering Wednesday night on ABC, is the rare series that features Asian-American actors in a show about an Asian-American family. It closely resembles ABC's Black-ish not primarily because both shows feature casts of color, but because both shows share a sort of emerging ABC house style, in which slightly hapless but deeply lovable narrators have family adventures while constantly teetering at the edge of a very much heightened reality.

The show is based on — but liberally adapted from — the story of Eddie Huang, whose parents were from Taiwan, and who are played in the show by Randall Park and Constance Wu. Their American dream involves running a steakhouse, perhaps the most cowboy-tinged, Americana-themed kind of restaurant they could have chosen. For young Eddie, played by Hudson Yang, being an American kid means hip-hop.

It's well worth reading this New York Times piece by Wesley Yang, which interrogates the "tortured ambivalence" the real Eddie Huang has about the show, as well as the long piece he wrote for New York Magazine about finding most of the pilot silly and frustrating but a sliver of it energizing. (Make sure you get to the end, though; there's a turn.)

But it's also worth at least considering the show simply as a self-contained half-hour of broadcast comedy, separate from any obligation to break ground, and asking: is it any good?

In the first three episodes that the network made available, you get a pretty basic set of family stories: kids trying to make friends, kids getting goofy and ill-advised ideas, mom trying to navigate the crazy neighborhood ladies, dad dealing with the problems at his restaurant, mom trying to lower the boom about school. As already mentioned, it feels, in structure and style and mood, a lot like Black-ish, with young Eddie Huang taking the sardonic narration over in the place of Anthony Anderson as Andre Johnson. That's not necessarily surprising — CBS procedurals have a style, as do ABC dramas and as did many of the successful NBC comedies of the '80s and '90s. It's a slightly detached retelling by the central character, almost adopting a little bit of the ability mockumentary shows like Modern Family have to let characters reflect on their own folly.

For the early stages of the show, it's really all about the execution of the material. They're still settling into the rhythms of this family, but Constance Wu as mom Jessica and Randall Park as dad Louis are both very good at making rather sitcommy lines sound better than they would in less careful hands. Wu has a tough task here, because her hard-driving mom could easily drift into stereotype, but they're smart to give her a personal story early on in which she's called upon to decide whether to stand up to bullies, much like Eddie has to do at school.

It's certainly not a great show; Eddie Huang is right that they're taking a pretty safe, not very provocative approach to putting this family in front of the viewers of ABC. He's right that a lot of the feel-good lessons aren't exactly daring in the face of what television has been saying for decades about everything being ultimately universal.

But he's also right that there are bracing moments in which this show is pushing on dynamics that don't come up all that often, as when Eddie finds himself tussling with the black kid at his school over who's "on the bottom" of the pecking order. Every episode has a couple of moments like that, where a new facet is added to a pretty ordinary sitcom plot and even a jaded eyebrow may go up in interest.

There's a warmth to the show, though, that feels earned. It has promise. It's a family with a lot of rootable, likable people in it. And it has a really funny line about Burt Reynolds and Cop And A Half in the second episode, though you won't necessarily want to explain it to your littlest ones. Fortunately, they won't get it.