Accessibility links
Don't Have A 'Cow,' Man No, really, don't. Reviewer Michael Schaub says David Duchovny's new novel Holy Cow is a mess of corny humor and half-baked, phoned in plotting. Fans may want to believe — but they shouldn't. 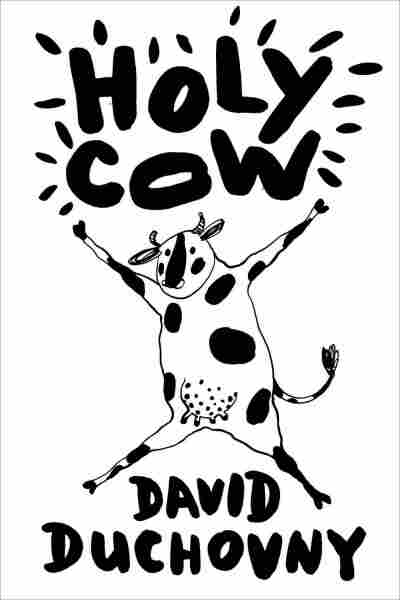 It's hard to know where to begin with Holy Cow, so let's just get this out of the way: It is sort of a children's book, and it was written by David Duchovny, star of The X-Files and Californication. It is about a cow named Elsie Bovary (get it?) who flees her farm with a pig and a turkey. They eventually end up in Jerusalem. This is possible because the turkey knows how to fly an airplane. The moral of the story, which is stated explicitly and repeatedly, is that people should be more conscious about the food they eat.

If you're delighted by that description, you might enjoy Holy Cow. If you find it nonsensical and deeply ridiculous — nothing in this bizarre disaster of a book will change your mind.

The novel opens with Elsie describing life on the farm where she and her fellow livestock live. "It's pretty chill. Spend a lot of time out in the field hanging with my bffs," says Elsie, because Elsie talks (or whatever) like that. Her chillness evaporates, though, when she sees a documentary about factory farming through a farmhouse window, and finds it decidedly unchill. With her two new friends, a turkey named Tom (get it?) and a Jewish pig named Shalom (okay, okay, we get it), she escapes the farm and makes plans to fly to India, where she will be unharmed. At some point, they end up in Jerusalem, and work with a camel to bring peace to the Middle East.

Holy Cow, in other words, does not have a plot so much as a set of high-concept scenes that barely relate to one another at all. The most coherent sections are Elsie's polemics against factory farming, which sound very much like a PETA pamphlet. This makes sense: most likely, all chill cows oppose being slaughtered. But heavy-handed agitprop in the name of a good cause is still heavy-handed agitprop, and readers of all ages tend to hate being lectured.

Elsie also takes time out of her day to complain about smartphones: "Selfies they call 'em, and that makes sense 'cause even though they're sending these pictures to others, it still smells like selfish to me. Is that why they call it an 'I phone'?" She is also not a fan of television, criticizing the way people watch it "passive and drooling." From most authors, this would sound pretentious. From Duchovny, it sounds both pretentious and stunningly oblivious.

The joke about selfies is typical of the humor in Holy Cow — self-conscious and aggressively corny. "So when we cows have a feeling, we feel it, till the feeling passes," Elsie says at one point. "Then we moo-ve on. Boom. Didn't see that coming, did you?" The book is filled with moments like these: Lazy jokes followed by half-hearted winking acknowledgements of the low humor. There are pages and pages of this, and eventually the reader is rewarded with a chapter about a pig going to a mohel to get circumcised. This is before the turkey learns to fly an airplane.

That's the most frustrating thing about Holy Cow. It makes no attempt to make sense. Sure, it's a fantasy, a fairy tale, but nothing in the plot or the characters is remotely coherent. It reads like a first draft that's never seen an editor. Duchovny makes a half-hearted attempt to explain the confusion away at the end, with a "Note from the Cow-Writer," which I'm guessing is a pun on "co-writer," but it doesn't matter: "I know Elsie; perhaps she is given to embellishment like any good storyteller, perhaps to outright lies like any great storyteller." (This actually isn't a bad sentence; it's a shame that it's stuck at the very end of the book.)

David Duchovny is, by all accounts, an intelligent man. He has a master's degree from Yale, where he studied under Harold Bloom. He is a talented actor, and he clearly feels deeply, as he should, about animal welfare. But Holy Cow is one of the most half-baked, phoned-in books I've ever read, and it's hard to look at it as anything but a vanity project. Of course, his fans want to believe. When it comes to this novel, they shouldn't.