Accessibility links
From 'Batman' To 'Birdman,' Michael Keaton Knows Suits And Superheroes Keaton says his 1989 bat suit was downright claustrophobic, but he somehow made it work. In the existential comedy Birdman, Keaton plays a washed-up, insecure actor looking for a second shot at fame. 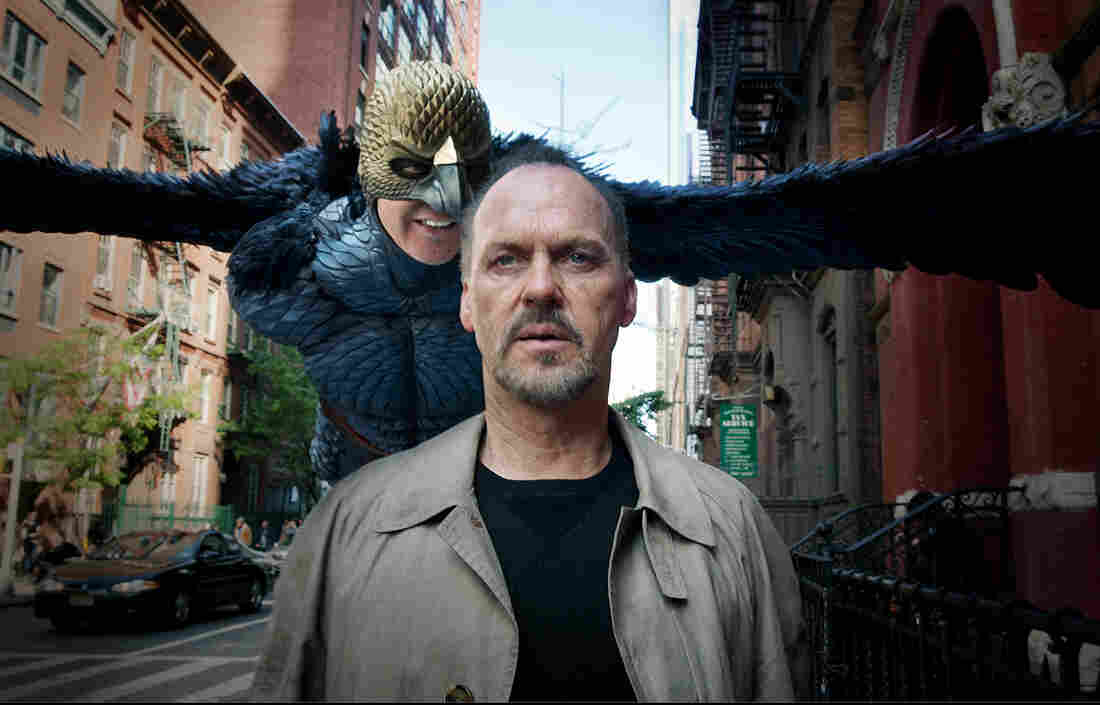 In Birdman, Michael Keaton plays both the actor Riggan Thomson, who is having an identity crisis, and his alter ego, Birdman, who badgers him because he gave up a lucrative Hollywood career for a play in an old Broadway theater. Courtesy of Fox Searchlight hide caption 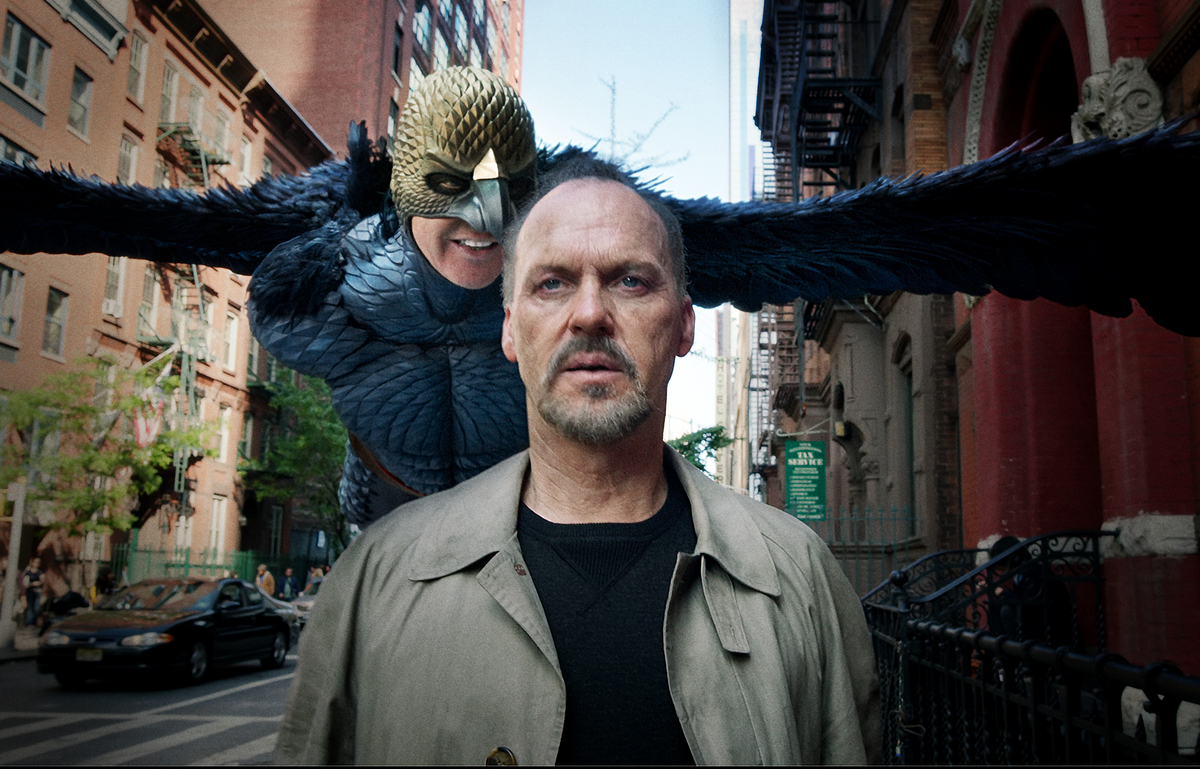 In Birdman, Michael Keaton plays both the actor Riggan Thomson, who is having an identity crisis, and his alter ego, Birdman, who badgers him because he gave up a lucrative Hollywood career for a play in an old Broadway theater.

In the existential comedy Birdman, Michael Keaton plays Riggan Thomson, a washed-up, insecure actor looking for a second shot at fame and success. He's entirely focused on himself. Keaton says this sort of narcissism — "that constant neediness and insecurity and whininess and me, me, me" — didn't come easily to him.

"When you're one of originally nine children, there's not a ton of room for that," Keaton tells Fresh Air's Terry Gross. "I was raised Catholic, so speaking about yourself or talking about yourself too much [wasn't done]. And then, on the Protestant side of my family, even more so do you not talk about yourself."

In the movie, Riggan is having a creative and personal identity crisis. He had been famous for starring as the superhero Birdman in three films. But he gave up the franchise years ago, and has been struggling to figure out who he is as an actor and a man. He's trying to prove his artistic worth by directing and starring on Broadway, in his own adaptation of a Raymond Carver story.

During rehearsals and previews, Riggan is constantly second-guessing himself. His insecurities and doubts, as well as his self-absorption, are physically manifested in the form of Birdman, who keeps appearing to Riggan, badgering him about having given up a lucrative Hollywood career for a play in an old Broadway theater. Birdman wants to regain the fame, glory and power that comes with being a superhero.

"I had to ... be cognizant of every tiny detail that was happening in every tiny little bit of the frame — and, at the same time, forget it and just be in the moment and be truthful and just be the character. Man, there was a lot to this movie."

Keaton drew on his experience playing Batman — in 1989 and 1992 — to portray his alter-ego character in Birdman. Keaton remembers having to overcome the claustrophobia of the Batman suit in the 1989 Tim Burton film.

When director Alejandro Gonzalez Iñárritu offered him the role in Birdman, Keaton accepted almost immediately. "I was pretty much in from the first phone call," Keaton says. It was only a few weeks into filming that Keaton focused on the fact that he was actually playing four roles — Riggan, Birdman, the characters in the play, and an actor who directs other actors. Keaton says "thank God" this didn't occur to him before he said "yes."

Keaton has been nominated for an Oscar for his starring performance in Birdman, which is nominated for eight other Academy Awards, including best picture and best director.

On the professional risk of taking such an ambitious role

I wanted to escape that. If I wanted to be cowardly about it — and not expose myself to it and kind of phone a little bit of it in — even if I wanted to, I couldn't have. I chose not to because I think it was good timing at this point in my life and in my career. ... Sometimes you fail, but to be frightened and to go down that hole and to be as raw as you can be — that's a blessing to me to get that opportunity.

It could've failed miserably, people could've laughed at me and made fun of me for the rest of my life, and honestly it probably would've hurt my feelings a lot and then I would've gotten by it and said, "You know what? It doesn't really matter because I got a big set of balls." 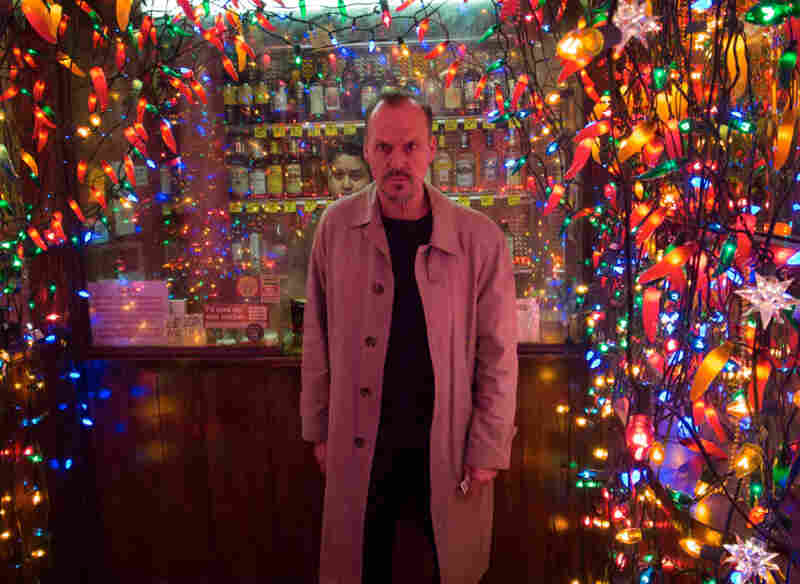 Michael Keaton says he couldn't relate to his character's narcissistic personality. "I tend to not have those kind of personality traits — that constant neediness and insecurity and whininess and me, me, me," he says. Courtesy of Fox Searchlight hide caption 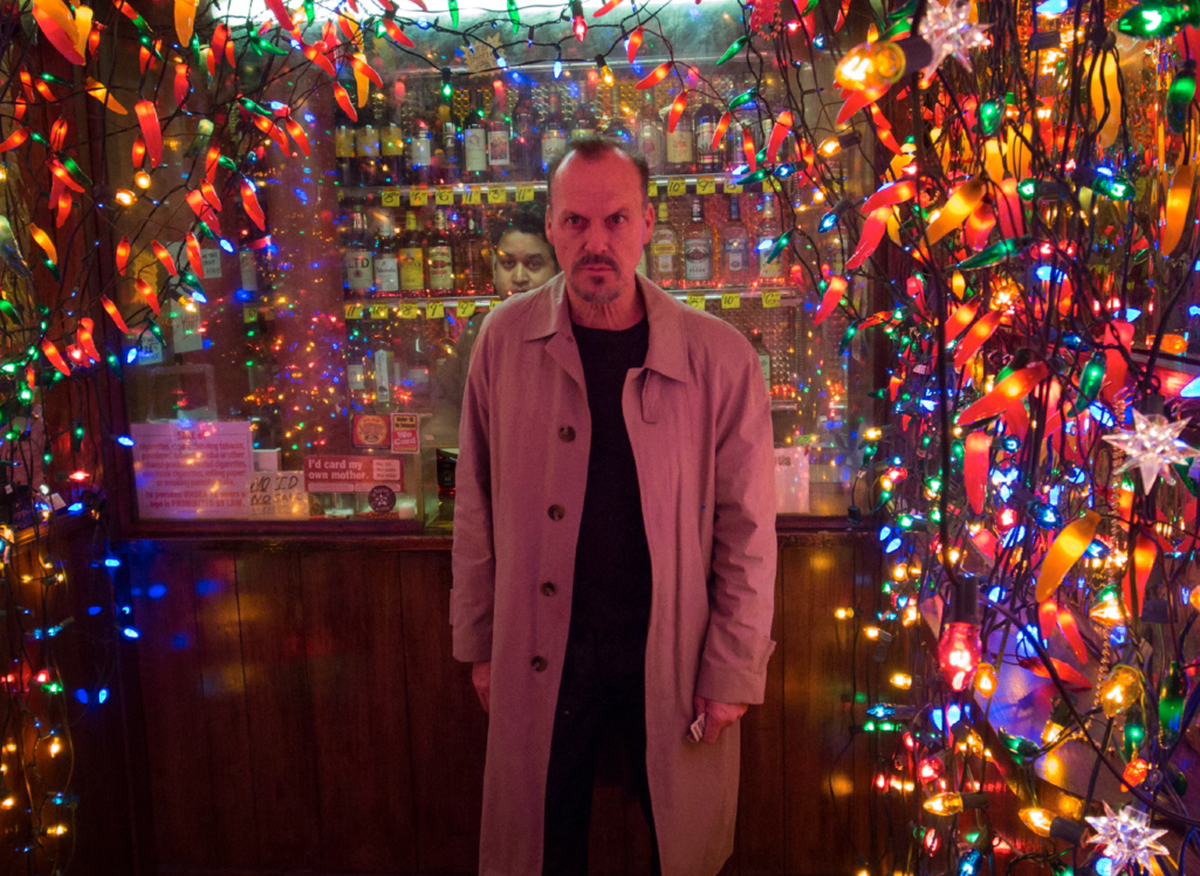 Michael Keaton says he couldn't relate to his character's narcissistic personality. "I tend to not have those kind of personality traits — that constant neediness and insecurity and whininess and me, me, me," he says.

On the challenges of shooting in the fast-paced, fluid style

Not only was it [scenes like] going down a hallway [where] another actor has to enter precisely at a moment, then there might be three people in the hallway, then you go downstairs — it was even things like downstairs out a doorway into the hallway where I see Edward [Norton], then we walk down the sidewalk. It had to be timed perfectly to get to a line exactly when I toss the coins to the drummer, and then timed out so we were dead-on the exact word, not just the line, to enter the bar. And then went into the bar and did the scene — and then that whole scene runs through the bar, and then I go over and walk back out. ...

In all those shots, often it was also a cab had to pull up at the right time and all the little details. ... I had to know kind of what was going to happen at all times and at the same time stay right in the moment and stay locked in the character and be cognizant of every tiny detail that was happening in every tiny little bit of the frame — and, at the same time, forget it and just be in the moment and be truthful and just be the character. Man, there was a lot to this movie.

[The briefs are] pathetic enough, but really the beautiful finishing touch is the black socks — that's what really sold me. It's just so sad and pathetic — and [shows] him trying to hold his dignity up somehow. ...

Here's how smart [Iñárritu] and [cinematographer Emmanuel "Chivo" Lubezki] are — and as precise as this movie had to be, [we] also needed to be flexible. ... Every day was problem solving. There's certain things you just can't know definitely how to shoot. ... One of them was, "OK, we'll get extras for a while and then you're probably going to disappear and get bored — how do you control the extras? How do you control the [other] people from coming in?" So kind of at the last second, he created the idea of the drummers and the marching band to distract people that way so that ... people [didn't mess] up the shot.

Simultaneously ridiculous — to the point where you had to overcome it — and risky and I guess kind of cool. I'm claustrophobic, so I had to work through that. That ended up working really perfectly for the character — made me feel real isolated inside there; [I] couldn't really hear. So that really ended up being a bonus for me.

Once again, you think, "Oh, boy, this is one of those things, this could really go down. This could be a huge mistake." But if you punk out or if you go halfway or you don't commit to it or if you get frightened and you want to save yourself — that just doesn't work. That's just never going to work, not to me, anyway. So you commit to it.

On growing up the youngest of seven kids [nine total; two died as babies]

Ed Norton On 'Birdman,' Wes Anderson And Why $40 Makes Him Proud

It was kind of great. Built-in audience, you know? A lot of love, people kissing you and playing with you, beating you up all the time, wrestling with you — there was always wrestling. We had four guys in the family, so somebody was always hitting somebody or chasing somebody or getting mad or fighting or wrestling — that was just what you did. So when you're the youngest, it's good for you. You figure out real early how to get out of headlocks and holds.

You're cabled in. And the guys were great, and all that, but to be honest with you, you go, "Yeah, you know I'd probably feel better if the movie [budget] were like $90 million and I'm cabled in, [rather than] ... a few million dollars."

Because you go, "Who did they get, exactly, to secure me to this building?" This is a guy who works like once every nine years and goes, "Yeah, I got a garage down the road ... I got some cables, I'll do it for ya." You know? That was my fear more than anything.