Accessibility links
Unions Have Pushed The $15 Minimum Wage, But Few Members Will Benefit Most union members won't benefit from a higher minimum wage because they already earn far more than that. With membership declining, some union leaders fear collective bargaining is dead. 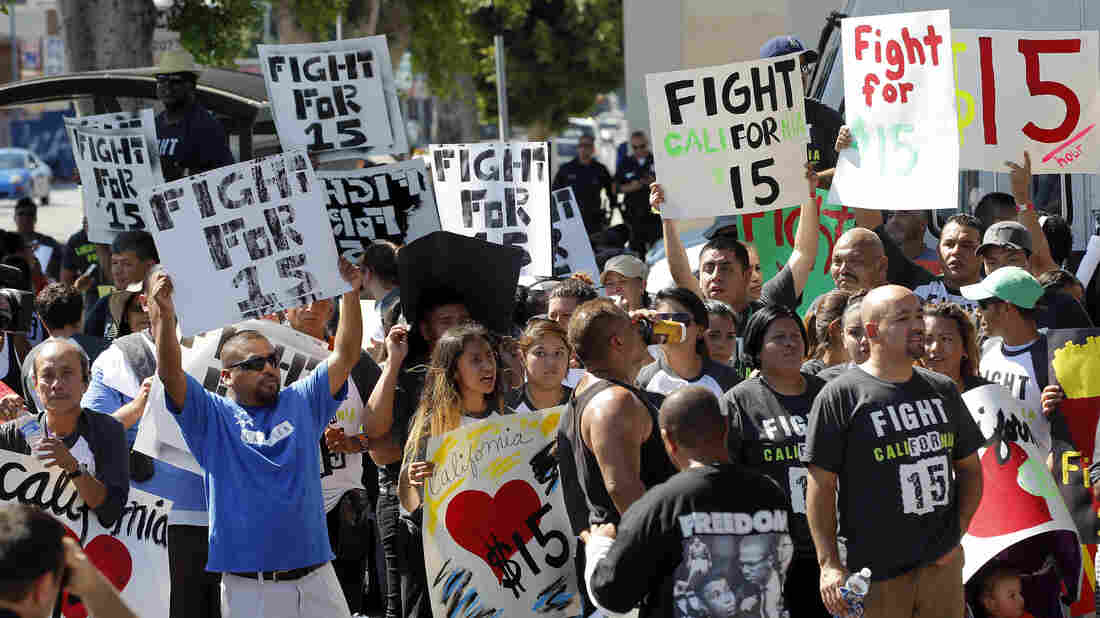 Fast-food workers in Los Angeles march in August 2013 to raise the minimum wage to $15 an hour. Similar protests around the country have been organized by labor unions. Nick Ut/AP hide caption 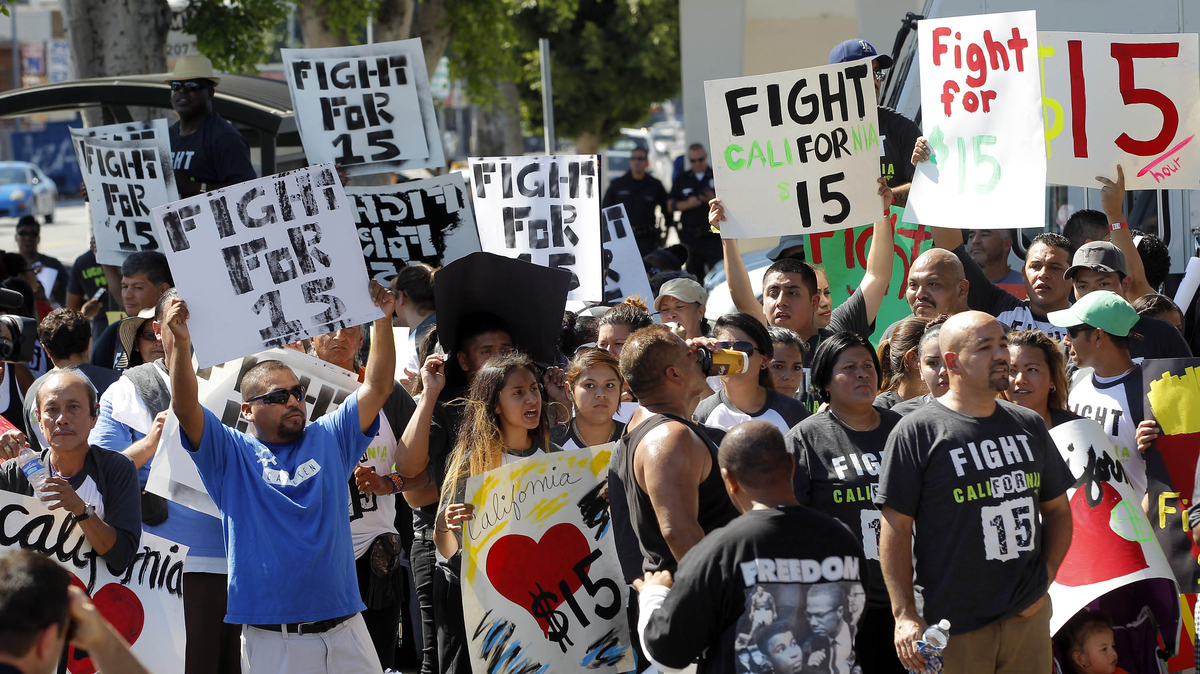 Fast-food workers in Los Angeles march in August 2013 to raise the minimum wage to $15 an hour. Similar protests around the country have been organized by labor unions.

The Los Angeles City Council is currently considering whether to raise the minimum wage to $15.25 an hour by 2019. It would follow Seattle and San Francisco, two cities that approved $15 minimum wages in the past year.

The spread of a higher minimum wage is a huge victory for the labor unions backing these measures — but it is unlikely most of the people getting raises will ever be part of organized labor.

The idea of a $15 minimum wage first came to the public's attention in a series of fast-food strikes starting in 2012. Those fry cooks and cashiers didn't just walk off the job by themselves — they were part of a multimillion-dollar effort orchestrated by unions.

But none of those restaurants have unionized, and they probably never will, says David Rolf, a vice president of the Service Employees International Union (SEIU).

"Since at least the early 1980s, winning unions for the first time in the private sector has been a Herculean task," Rolf says. "The political process provides an alternative vehicle." 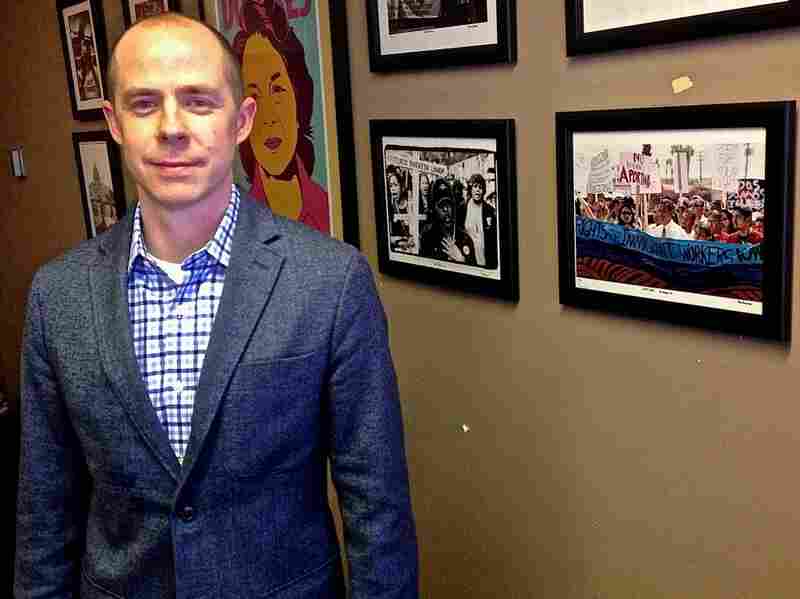 Rusty Hicks is the new head of the Los Angeles County Federation of Labor, which represents over 300 unions. While some union leaders say organizing is dead, he says unions must focus on it. Ben Bergman/Southern California Public Radio/ KPCC hide caption

It was voters who approved San Francisco's $15 minimum wage in November and in SeaTac, Wash., a year earlier, after a campaign led by Rolf.

"We can't be the movement that's just about us," Rolf says. "The labor movement that workers flocked to by the tens of millions in the 1930s wasn't known for negotiating 500-page contracts. They were known for fighting for the eight-hour day, fighting to end child labor."

Rolf is controversial among labor leaders because he's not shy about saying collective bargaining as we know it is dead.

"Any model that shrinks for 50 years in a row in all 50 states is probably not part of the future," he says.

In the mid-20th century, about 1 in 3 American workers belonged to a union. Last year, only about 1 in 10 did, which is the lowest number in nearly a century.

Even so, Rusty Hicks, the new head of the Los Angeles County Federation of Labor, says unions should focus on organizing.

"There is a big debate going on within the broader labor movement about, how do you adapt to a global economy of the 21st century?" Hicks says. "I believe that collective bargaining is not dead."

And Hicks says that while unions may be on their way out in the rest of the country, they're not in LA, where 16 percent of the area's workers are unionized. That number has held steady for more than a decade, which counts as a victory these days.

"LA is on the cutting edge of organizing in this country, from the port drivers, to hotel workers and everything in between," Hicks says.

But it might not be in unions' best interest to be leading the $15 fight, says Nelson Lichtenstein, a labor historian at the University of California, Santa Barbara.

"In effect, what you have now is the SEIU — its hospital membership ... or its membership working for the department of motor vehicles — [saying that] their dues money is helping to raise the wages of fast food workers, and not their own wages," he says.

This is because most unionized workers earn far more than the minimum wage. According to a report by UCLA's Institute for Research on Labor and Employment, union workers in LA earn an average of more than $27 an hour.

Still, Lichtenstein says, having a higher floor could be beneficial in future contract negotiations.

"If you can raise the wages in those sectors which have been pulling down the general wage level — i.e. fast food or retail, for that matter — then it makes it easier for unions to create a higher standard and [to] then go on and try to get more stuff," he says.

It's also rare now for workers to stay in the same job for their whole career, so people are likely to drift in and out of unions.

For this reason, Robert Matsuda, a studio violinist represented by the American Federation of Musicians, is all for a $15 per hour wage.

"I might have to take a minimum-wage job in the near future, so it might directly affect me," he says.

Even though Matsuda works for well above the minimum wage now, he worries that may not last. He's getting fewer gigs as more film and TV scoring work gets outsourced overseas.