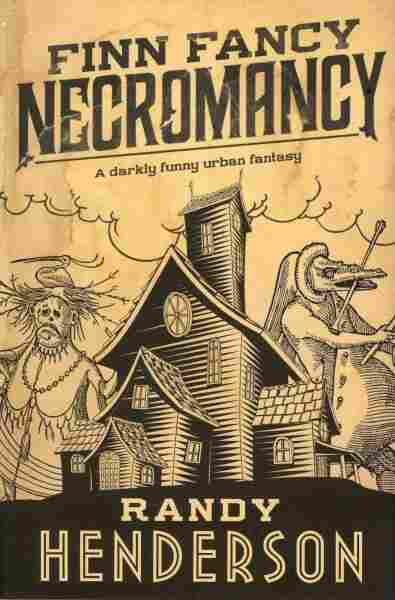 Fantasy's turn toward the grim has not lessened lately, nor should it. The success of George R. R. Martin's A Song of Ice and Fire not only justifies all that brooding darkness, it's opened the doors for many other excellent and similarly grim books. Randy Henderson, however, has something else in mind entirely with his debut novel, Finn Fancy Necromancy. Strictly speaking, it's an urban fantasy, one that takes place in and around present-day Seattle. But even though it deals with sinister magic and family tragedy, it counterbalances that darkness with something that's become increasingly rare in fantasy fiction: laughs, laughs, and more laughs.

The book is named after its main character, Finn Gramaraye — or more specifically, the mocking nickname his older brother Mort has give him, Finn Fancy Necromancy Pants. Their family is made up of magicians, part of a secret society of wizards and witches that has lived under the noses of "mundies," or mundane people, for centuries. Yes, it sounds like the basic premise of untold numbers of urban fantasy series, including Harry Potter. Henderson points out that fact, and name-checks Harry Potter in the book itself; this fantasy is self-aware. But unlike Lev Grossman's open nods to Harry Potter in his Magicians trilogy, Henderson's self-awareness isn't postmodern. It's all part of one of Finn Fancy Necromancy's most winning charms: Finn's obsession with pop culture.

At the start of the story, Finn — a necromancer who can manipulate spiritual energy and talk to the dead — wakes up after having spent 25 years in the Other Realm, a kind of Phantom Zone where criminal magicians are imprisoned. He was sent there in 1986, at the age of 15, for a crime he didn't commit. In the meantime, his body has aged; the soul of a kid has been inserted into the body of a 40-year-old. It's a comic device that goes back to Freaky Friday, but that saw a resurgence in the late-'80s with movies like Big and Vice Versa. Henderson plays on this trope wonderfully, and not without a wink. Finn is obsessed with the pop culture of his youth, and hardly a page goes by without some clever reference to '80s movies, music, cartoons, comics, or breakfast cereal. The chapters are even named for popular '80s songs.

That kind of pop-culture-heavy approach can be a drag if not handled right, but Henderson juggles his references beautifully. The Miami Vice-and-Rubik's Cube zeitgeist is all he knows, and he clings to it with a desperation that's as poignant as it is hilarious. And it's all stitched seamlessly into the straightforward plot, which revolves around Finn's hunt for whomever framed him. He's aided by his kooky brothers and sister (one falsely thinks he's a werewolf; another is allergic to magic), but his rockier relationships with two old crushes from high school — Heather, an alchemist, and Dawn, a mundy who has no idea that magic exists — make for an even livelier character dynamic.

Henderson's unrepentant love of the '80s shines through in almost every John Hughes love-triangle twist and Goonies-style escapade. Those who don't share that love might not find as much resonance, although the book's bright, brisk storytelling and lightly snarky wit cuts through the tangle of David Hasselhoff and Duran Duran — not to mention the eerie shadows and harrowing horror that eventually overtake the humor and envelope the story. That light/dark dynamic makes for a playful, sometimes satirical touch. At one point, a comically exasperated Dawn tells Finn and his magic-geek brothers, "You guys are taking this fantasy s*** way too seriously." Intentionally or not, that line might as well be Henderson's proclamation to his fellow fantasy writers: It's okay to lighten up every once in a while, especially when the results are as rollicking and charming as Finn Fancy Necromancy.