Accessibility links
Book Review: 'Signal To Noise,' By Silvia Moreno-Garcia Silvia Moreno-Garcia's debut novel bounces back and forth between Mexico City in 1988 and 2009 to tell the story of a young woman who finds she can make magic — actual, dangerous magic — with music. 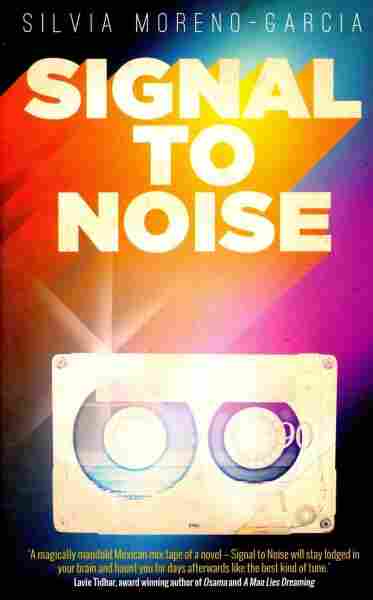 "Magic will break your heart," warns Mama Dolores, the grandmother of Mercedes "Meche" Vega, the protagonist of Silvia Moreno-Garcia's debut novel, Signal to Noise. When it comes to magic, Mama Dolores is not speaking metaphorically: Meche, a 15-year-old girl living in Mexico City, has discovered how to practice magic, actual spells that can do actual good and actual harm.

And her grandmother knows all too well what the price of such dalliances can be. The notion of consequences, both supernatural and interpersonal, underpins all of Signal to Noise, but the book is just as much about music. Meche uses her father's vinyl LPs as talismans, and listening to them on an old turntable become a mystic ritual — an empowering one, at least until the heartbreak comes.

Meche's story ping-pongs back and forth between Mexico City in 1988 and in 2009. In the earlier sequences, she's an angry, precocious 15-year-old from an unstable home who spends most of her time with her headphones on and her Walkman cranked up.

Her best friend is Sebastian, a "pseudo-punk" who's as much of a misfit as their school as Meche is. In the later sequences, a 36-year-old Meche – now living in Oslo – returns home so that she can bury her estranged father. She's a software developer who's left Mexico City, and her experiences as a troubled, magic-dabbling teen, far behind. Or so she thinks.

Moreno-Garcia employs her back-and-forth structure beautifully, building suspense and emotional resonance between the two parallel storylines. Her main strength, though, is in the voices she gives her characters. Meche is volatile, complicated, and compellingly flawed, and her web of relationships tightens as her growing magical powers begin to create more problems than they solve.

Her system of magic — using music as a portal to arcane knowledge — gives Moreno-Garcia ample room to suffuse Signal to Noise with references to popular music, from The Beach Boys to Madonna. Those references are copious but never gratuitous; instead they add texture and atmosphere to the book's rich vision of working-class Mexico City.

Despite its intricacy, Signal to Noise feels uncluttered and understated. At times, that unforced pace drags, but even when Meche and her friends are simply hanging out and talking about love, life, and music, Moreno-Garcia makes it funny, touching, and engaging. For all its immersion in magic — this is, strictly speaking, an urban fantasy — the book doesn't fuss over the paranormal. There are only enough supernatural goings-on to propel the plot, and to unearth the hurts, fears, and passions that Meche has stoically buried throughout her life.

At its core, Signal to Noise is a love story, but ultimately it's just as much about power — mystical, emotional, institutional — and what happens when it's abused, even in small, quiet ways. And it's also about regretting things left unsaid and undone, and how those regrets haunt us. In a poignant, graceful coda, Moreno-Garcia brings the book full circle, slyly subverting the expectations of a linear narrative and punctuating Meche's story with a hushed, lovely flourish. In many ways, Signal to Noise is a coming-of-age tale, but it's also the tale of what comes after — and what happens when forces beyond our control, magical or otherwise, are better left that way.