Accessibility links
Review: THEESatisfaction, 'EarthEE' Cat Harris-White and Stas Irons have always concerned themselves with galaxy-building — their albums, videos and performances don't arrive in this world so much as reveal theirs. 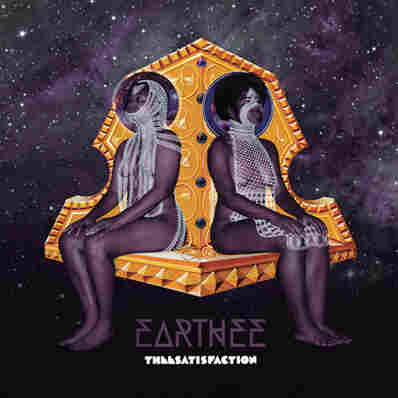 THEESatisfaction opens its second album, EarthEE, with the lines, "Said the bird to the water: May I take a sip? May I dip my toes in it?" Whether the introduction is meant as an avian parable or, more likely, a declaration of intent, it effectively functions as a disclaimer identical to the one cheekily issued by Beyoncé halfway through "Blow": I'm about to get into this. In both cases, the warning is purely decorative. Beyoncé waited until the middle of an explicitly sexual song to deem it "for all my grown women," and THEESatisfaction is asking to dip its toes in now, two records and seven years into a genre-melting career that has never waited for permission.

EarthEE, like the Seattle duo's 2012 debut awE naturalE, is immersive almost to the point of hypnosis. Blending electronica, R&B, neo-soul, avant-garde hip-hop, and an expansive Afro-futuristic philosophy, Cat Harris-White and Stas Irons have constructed a cosmology of political consciousness, poetic lyricism and viscous, funky instrumentation that sticks like cooling caramel. In a manner more befitting speculative fiction than pop radio, Harris-White and Irons have always concerned themselves with galaxy-building — their albums, videos and performances don't arrive in this world so much as reveal theirs. This is partly thanks to the unusually intimate way Irons' and Harris-White's vocals interact, as they echo, bolster and respond to each other with urgency and empathy inherent to the spoken-word scene in which they first met. More than half the tracks here are collaborations with Shabazz Palaces, Meshell Ndegeocello, Taylor Brown and/or Erik Blood, as well, furthering the impression of the pair as ascending the throne of futuristic, innovative groove-royalty.

In both register and tone, EarthEE is much lower than the comparably playful awE naturalE. Harris-White and Irons dial back the animation in their deliveries, and make up for it by upping this album's lyrical ante. "Planet For Sale," "Post Black Anyway," "Recognition" and "Fetch/Catch" are intense, percussive portraits juxtaposing a bleak, apathetic present with visions of an enlightened future. This, above all, is what defines THEESatisfaction: a knockout punch of consciousness-raising embedded in a deceptively easygoing beat. In theory, EarthEE is a cosmic, funky dance party. In practice, it's a revolution.