Accessibility links
Review: Screaming Females, 'Rose Mountain' Compact and intense, the New Jersey band's songs channel the spirit of punk, but also the density of heavy rock that's had the fat cut out. 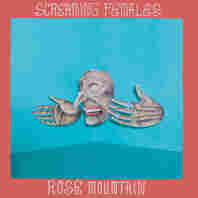 For 10 years, Screaming Females' music has come wailing out of the scruffiest and homiest of venues — basements across its home state of New Jersey, house shows from coast to coast, even NPR's Tiny Desk — in a ragged style befitting the band's lean, raw, punk-informed rock. Screaming Females' sound scraps and scrapes, fueled by the canyon-spanning vocals and bruising guitar of bandleader Marissa Paternoster, but for all its DIY roots, every minute feels huge. This is basement punk writ arena-sized.

That's especially true of Rose Mountain, the group's new sixth album, which lends Screaming Females' music its most polished sheen yet. But here, the slickness new producer Matt Bayles brings out never feels cynical, and enhances rather than obscures Paternoster's presence. A screamer and shredder worthy of any vintage hard-rock band, she never overindulges; never wastes a motion. Every sound she makes, even the most bombastic of guitar solos, is made in pursuit of sheer force. Compact and intense — Rose Mountain comes and goes in about 35 minutes — these songs channel the spirit of punk, but also the density of heavy rock that's had the fat cut out.

Even Rose Mountain's song titles capture that bruising directness, as Paternoster blares through the plainspoken likes of "Burning Car," "Broken Neck" and the blistering, wonderfully anthemic album opener "Empty Head." As she roars from song to song, what comes through loudest of all is confidence: a voice that's nervy and open, a guitar placed right at the center of it all, and a band with 10 years of basements under its belt, at the top of its game and ready for whatever venues are up next.