Accessibility links
Review: Kristin Diable, 'Create Your Own Mythology' The blues-rock singer combines the ambition and self-awareness of a longtime New Yorker with the easy swagger of her Louisiana home. 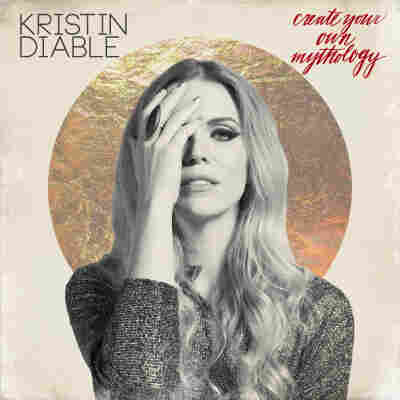 Create Your Own Mythology Courtesy of the artist hide caption

The romantic notion of a musician holing up in a studio, alone between soundproof walls with her genius and the muses, doesn't hold water in Louisiana. The lion's share of post-contact American musical history has been borne along the curves of the Mississippi River, and no place incubates a tune quite like the cradle of the Crescent City. There's no turning off the faucet of sound in Louisiana; no shutting the windows against the breezes of history or creativity. It's molecular, ancestral, unavoidable. And so it is that a young singer from Baton Rouge went to New York to find her living, but came home to New Orleans to live.

Kristin Diable is a singer-songwriter whose voice writes her autobiography. In her unabashed delivery, she's got the ambition and self-awareness of a New Yorker, testament to the years she spent there as a young adult making contacts and a name for herself in the music industry. In the rhythm behind her and the twang of her long vowels, she's got the easy, yeah-you-right swagger of her Louisiana roots. At the soundboard of producer Dave Cobb, her bluesy Southern rock, largely unadorned on prior releases with her band The City, gets the slick '70s-schooled Nashville sound for which it was meant. To show for the bookoo lot of it, she's got a rollicking throwback of a new album, Create Your Own Mythology.

Diable has the same grit lining her throat that Amy Winehouse had, but sings from a place of levity that Winehouse never found. "Hold Steady" and "Bird On A Wire," two of the album's moodier numbers, are lyrically dark and lonely, but Diable's vocals give them empowering buoyancy. With that much heft behind her holler, she might sing herself a sad song to get through the night, but clearly hasn't given over wholly to heartbreak. Create Your Own Mythology traverses bluer skies in the beachy "Driving In Your Car" and affirming "Make The Most," and reaches transcendence in "Time Will Wait," a tambourine-bolstered barn-burner that rolls in like a summer storm and opens up like a magnolia in May.

Almost as important as the music on Create Your Own Mythology, though, is its title. What better name could there possibly be, coming from a singer with roots in two uniquely mythological American cities, as she casts wide the net of her life, its visions and origins, and seeks to create something of her own?