Accessibility links
Train Derailment In West Virginia Sends Oil Tanker Into River One person was being treated for potential inhalation issues, but no other injuries were reported, according to CSX, the train company. 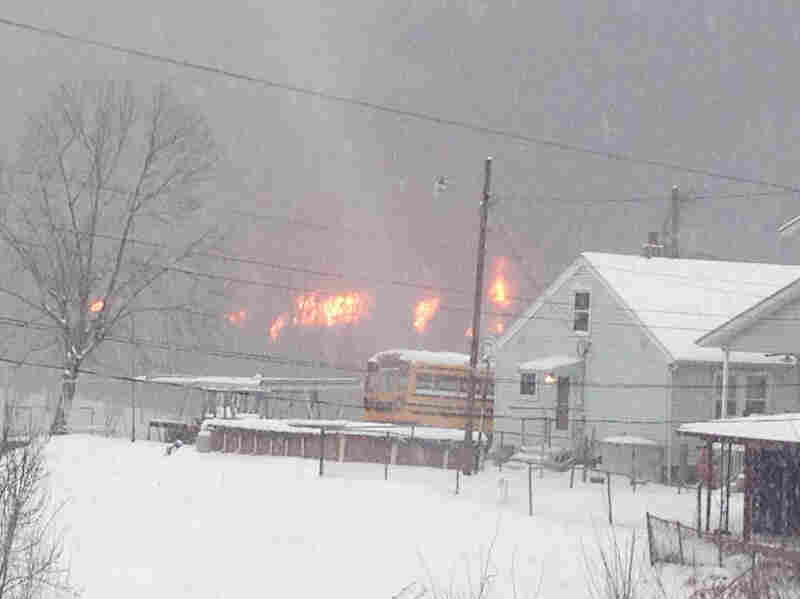 A fire burns Monday, after a train derailment near Charleston, W.Va. Nearby residents were told to evacuate as state emergency response and environmental officials headed to the scene. John Raby/AP hide caption 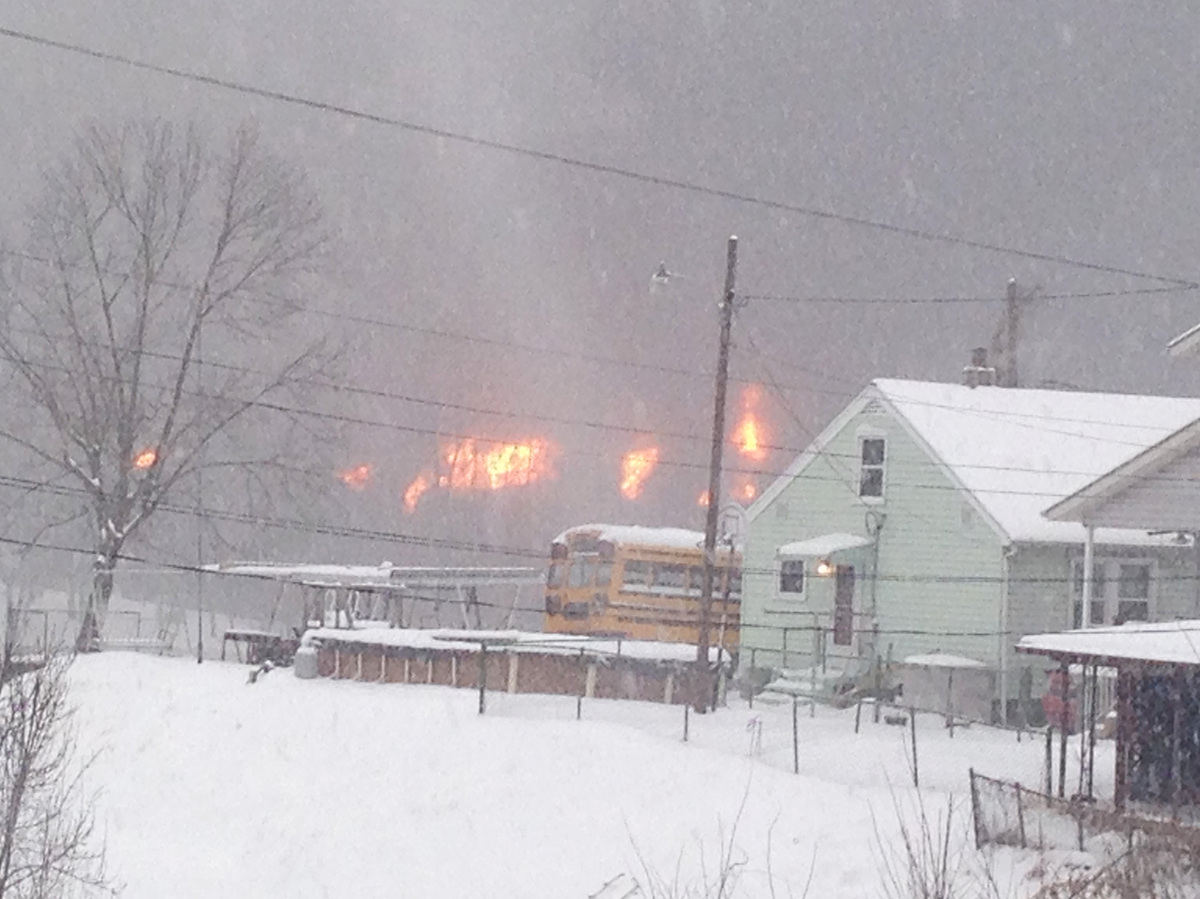 A fire burns Monday, after a train derailment near Charleston, W.Va. Nearby residents were told to evacuate as state emergency response and environmental officials headed to the scene.

A train carrying more than 100 tankers of crude oil derailed in southern West Virginia on Monday, sending at least one into the Kanawha River, igniting at least 14 tankers and sparking a house fire, officials said.

One person was being treated for potential inhalation issues, but no other injuries were reported, according to a news release from CSX, the train company. Nearby residents were told to evacuate as state emergency response and environmental officials headed to the scene about 30 miles southeast of Charleston.

The state was under a winter storm warning and getting heavy snowfall at times, with as much as 5 inches in some places. It's not clear if the weather had anything to do with the derailment, which occurred about 1:20 EST along a flat stretch of rail.

As federal railway and hazardous materials officials were heading to the scene, the company said it's still investigating what caused the train to come off the tracks.

Public Safety spokesman Lawrence Messina said responders at the scene reported one tanker and possibly another went into the river. Messina said local emergency responders were having trouble getting to the house that caught fire.

James Bennett, 911 coordinator for Fayette County, said a couple hundred families were evacuated as a precaution.

The rail company said it's still sorting out many specifics in its response.
"CSX teams also are working with first responders to address the fire, to determine how many rail cars derailed, and to deploy environmental protective and monitoring measures on land, air and in the nearby Kanawha River," CSX spokesman Gary Sease said in a news release.

The fire continued burning along a hillside Monday evening, and small fires could be seen on the river.

David McClung said he felt the heat from one of the explosions at his home about a half mile up the hill.

His brother in law was outside at the time of the derailment and heard a loud crack below along the riverfront, then went inside to summon McClung, his wife and their son.

One of the explosions that followed sent a fireball at least 300 feet into the air, McClung said.

"We felt the heat, I can tell you that," McClung said. "It was a little scary. It was like an atomic bomb went off."

Becky Nuckols heard the train hit the house directly across the river from her house in the community of Boomer.

"I thought it was a snow plow," she said. That's what made me look out. All you heard was a big boom."

After calling 911 Nuckols said she ran outside and saw a man leave the house and take off running.

The office of Gov. Earl Ray Tomblin, which has issued a state of emergency, said the tanker cars were loaded with Bakken crude from North Dakota and headed to Yorktown, Virginia.

Local emergency officials said all but two of the 109 cars being hauled were tanker cars.

West Virginia American Water spokeswoman Laura Jordan said the company shut down a water treatment plant, located about 3 miles from the derailment, at about 2:30 p.m. The plant serves about 2,000 customers.

State health officials said another water plant downstream in the town of Cedar Grove also closed its intake. They asked customers from both water systems to conserve water.

The U.S. Transportation Department is weighing tougher safety regulations for rail shipments of crude, which can ignite and result in huge fireballs.
Responding to a series of fiery train crashes, including one this spring in Lynchburg, Virginia, the government proposed rules in July that would phase out tens of thousands of older tank cars that carry increasing quantities of crude oil and other highly flammable liquids. It's not clear how old the tankers were on the derailed train.