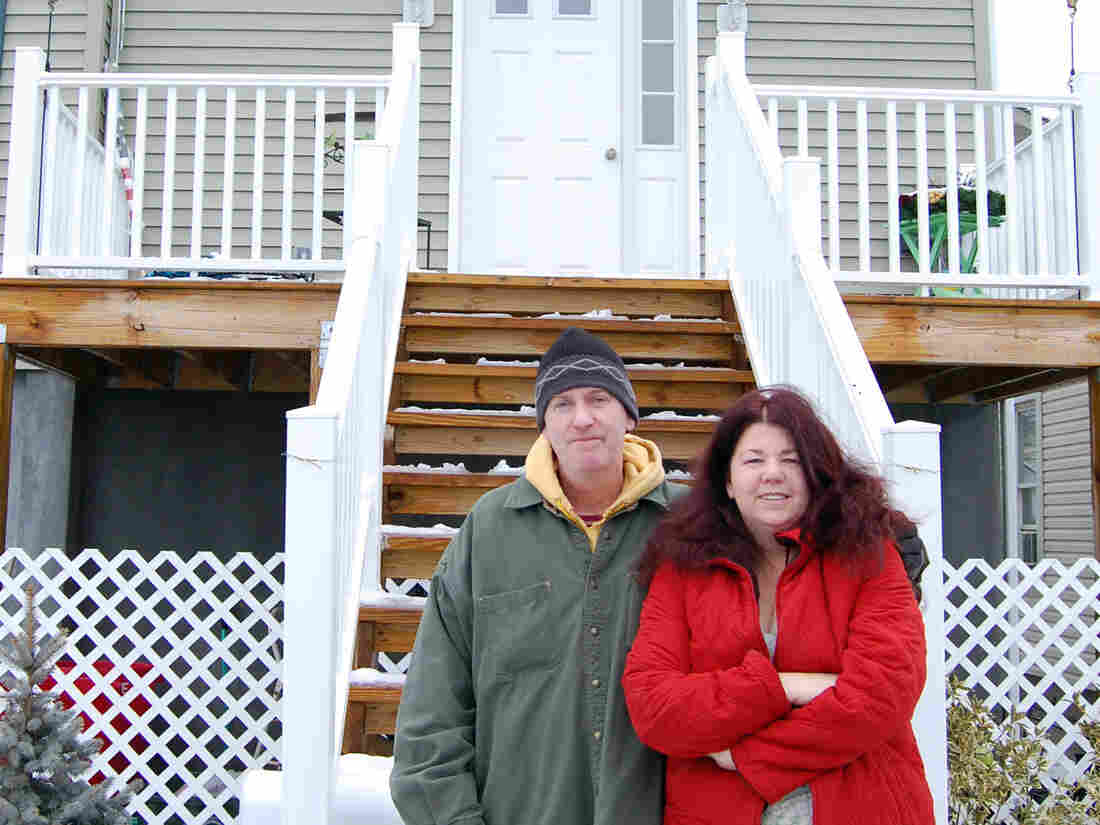 Dan and Eileen Stapleton in front of their post-Sandy home in Long Beach, N.Y. They say it would cost taxpayers less if insurance just settled their claim. Charles Lane/WSHU hide caption 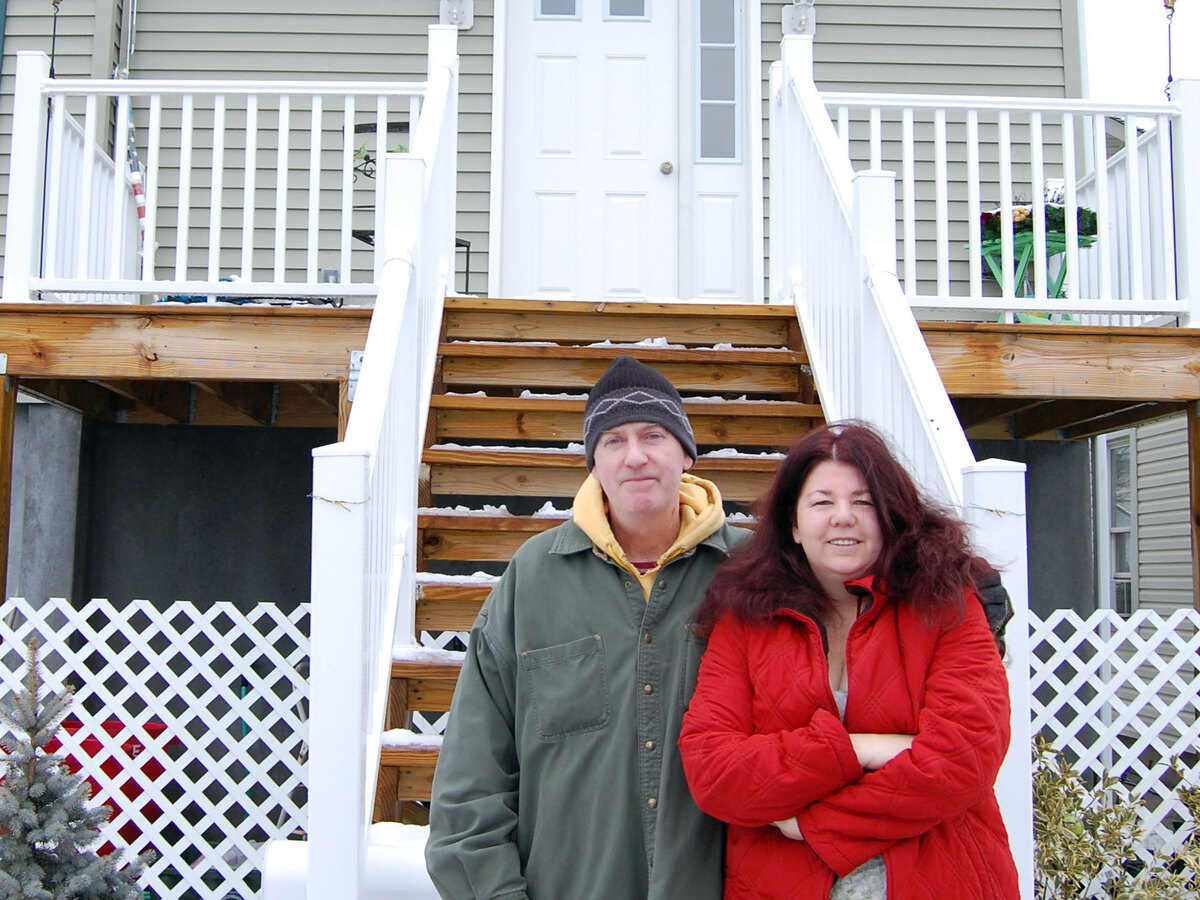 Dan and Eileen Stapleton in front of their post-Sandy home in Long Beach, N.Y. They say it would cost taxpayers less if insurance just settled their claim.

It's been more than two years since Superstorm Sandy flooded homes in New York and New Jersey. Yet the legal battles continue over how much insurance should pay.

About a thousand homeowners have disputed in court what they call "lowball" estimates for repairs. Also, some insurance companies have been accused of falsifying the engineering reports used to lower those estimates.

And then there's this: the legal fees to defend the estimates could surpass what it would cost just to pay the claims outright.

Dan and Eileen Stapleton live in Long Beach, N.Y., a narrow dash of land between the bay and the ocean.

"When the insurance company came in, they tried to even fight us over inches of water," Eileen says. "We had to watch our own home and truck go under water."

They have flood insurance through the National Flood Insurance Program, the NFIP, which is different than a typical homeowners policy.

NFIP policies are administered by normal insurance companies like Allstate or Fidelity, but the claims are paid by taxpayers.

"We've paid for our flood insurance for 20 years. This is the only time we would ever need help," Dan says.

Taxpayers also pay the legal fees to defend the claims when homeowners like the Stapletons say they're being shortchanged.

"I feel bad for some guy in Iowa or some guy upstate — he's paying for this," Dan says.

The Stapletons and scores of other homeowners affected say the insurance companies who manage the NFIP polices are being overly litigious in fighting flood claims.

Their lawyer says this is intentional. Denis Kelly has banded together with other lawyers who have clients like the Stapletons and they filed a RICO lawsuit alleging racketeering and organized fraud.

Kelly says, "The defense attorneys, their adjusters, their engineers ... I believe their goal is to drag out this process for as long as they possibly can." 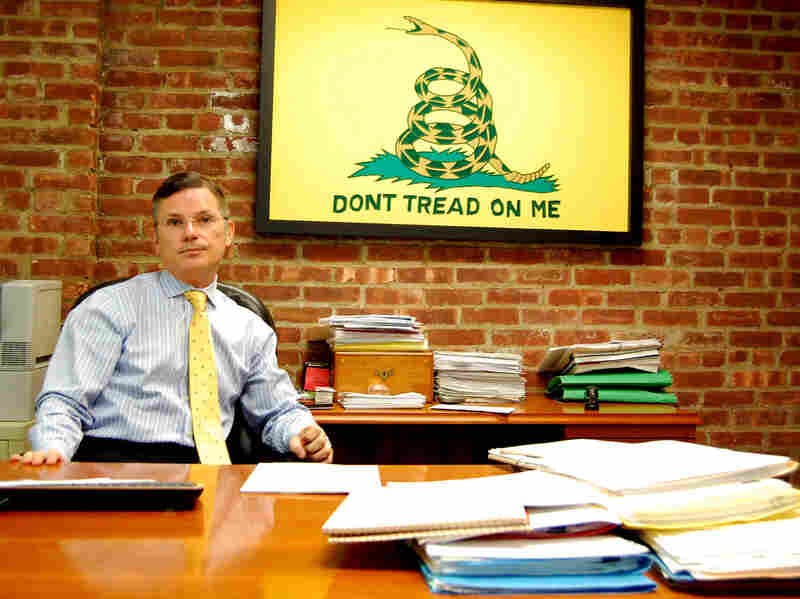 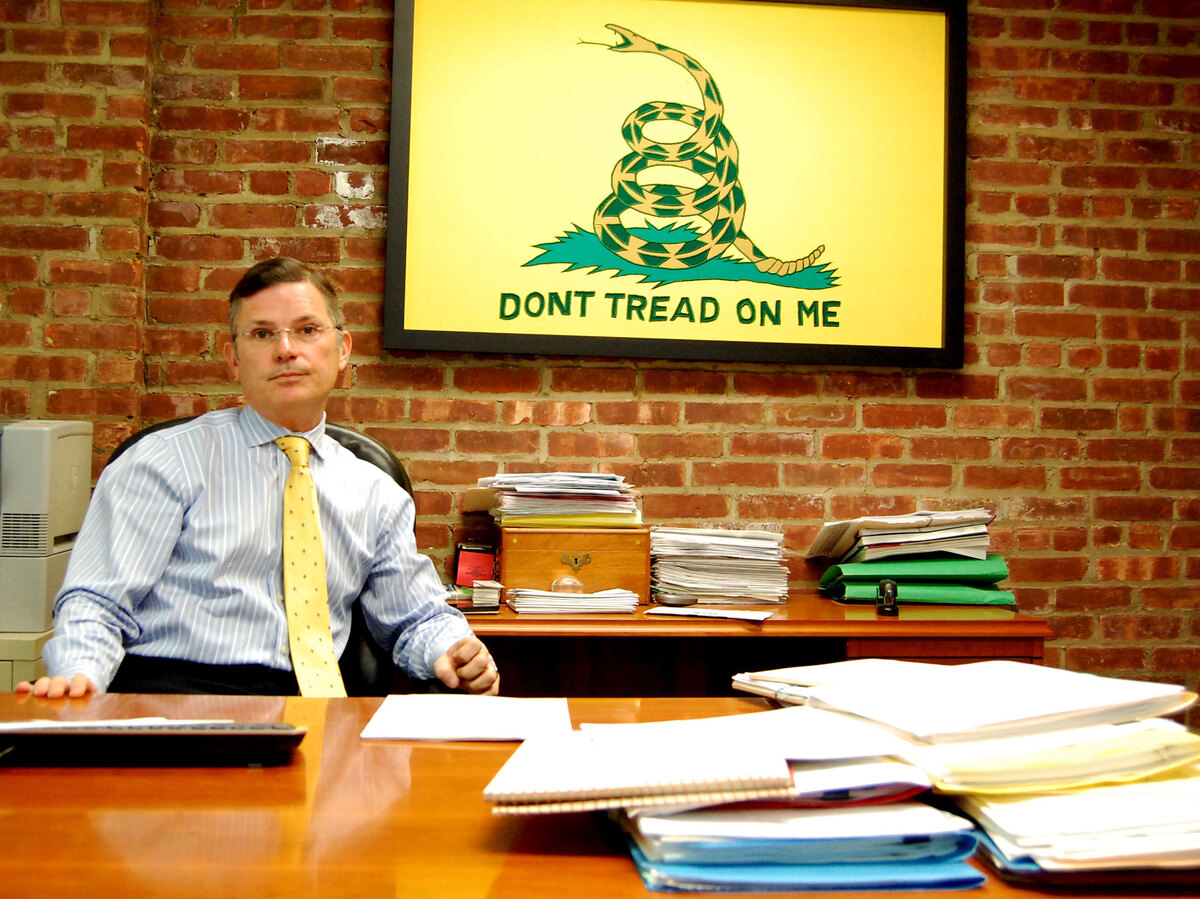 Dennis Kelly in his Long Beach, N.Y., office. Kelly and others allege insurance lawyers are dragging out claims in order to pad legal bills.

According to Kelly's complaint, the scheme starts with the lowball estimate. The Stapleton's had to completely rebuild their house for $220,000. But the insurance company only offered them $98,000 because it says the foundation was damaged before Sandy. Kelly says the lower claim was designed to incite litigation.

"They wanted to take the deposition of one contractor who issued a paid receipt for $500," Kelly says. "How much does that whole process cost relative to what it is they're claiming? Are we going to have more than $55,000 worth of legal fees here to address a $55,000 claim?"

In court documents, lawyers for insurance companies estimate that legal fees could top $100 million. Federal Magistrate Gary Brown called that number a "really, really big problem" because that would be far more than the disputed amount.

But the insurance companies and their lawyers say they have to spend that much money because they have the fiduciary responsibility to protect tax dollars.

"The flood claim's adjustor determines the amount payable on any claim based on very specific guidelines and rules established by the NFIP," he says.

In an interview later, Griffin says sometimes there's good reason for insurance companies to spend more fighting a claim than the claim is worth.

He says, "It may not be as an expensive as a claim as you might think for this time, but the next time it could be tens of thousands or hundreds of thousands of dollars. For other claims that would come, that would be similar."

FEMA has since warned insurance companies to keep legal fees in check and mediate with policy holders. But homeowners like Eileen Stapleton says the mediations are just more opportunity to pad legal bills.

"How many lawyers, how many paralegals — 'I need my assistant, I need the guy who makes the good coffee for me,' — that whole traveling pack of people just cost a small fortune. All of that money that they are wasting on mediation — just because they don't want to pay us?" she says.

FEMA doubts legal fees for Sandy will reach $100 million, but it didn't disagree with the court that it would be cheaper just to pay the disputed claims outright rather than fight them.

In addition to the two RICO lawsuits, homeowners have joined a series of class action suits. Also, New York's attorney general and the Department of Homeland Security's inspector general have ongoing investigations.