Accessibility links
Book Review: 'Tales of the Marvellous and News of the Strange' These are not your father's fairy tales, but reviewer Genevieve Valentine says readers prepared to devote some time will find rich rewards in this newly translated volume of 10th-century Arab stories.

'Tales Of The Marvellous' Is Indeed Very Strange

'Tales Of The Marvellous' Is Indeed Very Strange 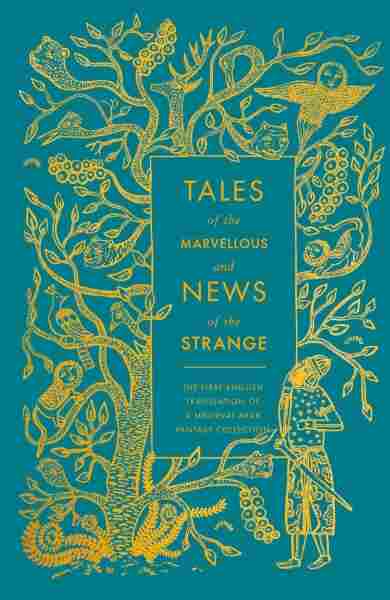 Tales of the Marvellous and News of the Strange

"I have come in search of a gazelle with white feet or a man in a shirt."

Sometimes, it's advisable to leave an introduction until after the book, when it becomes part of an experience you've already drawn from the work itself. But sometimes you're reading Tales of the Marvellous and News of the Strange, a collection of 10th century fantasy tales from the Arab world, newly translated by Malcolm Lyons — the first English translation since its discovery in Istanbul in 1933. The volume's beautifully presented; copper-stamped on turquoise, prepared to be treasured. But those expecting the usual will be surprised nearly as soon as they begin; this book is a complicated story indeed.

Its introduction (by Robert Irwin) includes, among notes on racism, misogyny, and theology, a section on "Flaws and Narrative Incompetence." It's a frankness that suits the tone of these 18 tales. Third-person stories slip into first person, lacunae rob us of critical information, and pronouns get confusing halfway through a tale-within-a-tale: It's good to have a map. But that same sense of practicality infuses the tales themselves, so that wonderment about being swindled by unscrupulous businessmen and wonderment that your horse is your disguised sister-in-law stand side by side. It makes more sense by the time you get there; it's just a long and winding road.

The stereotypical European fairy tale is concise — short enough to entertain in a limited time — and often, details are secondary to the magic or the moral of the tale. The places themselves are usually recognizable but anonymous realms: a farm, a kingdom, a land far away. To lose yourself in these Tales of the Marvellous is quite another thing — something more sprawling and more dense, meant to entertain a reader with time to absorb it all. (Similar attention to prose is a feature of traditional Arabic fantasy.) Here, characters occupy a lavish and often real-world stage: these princesses wear Venetian silks and have holdings in Egypt.

And though there are magicked animals and jinni here, these stories are most often propelled by their characters' own fates and follies. There's dialogue aplenty, buckets of tears, no shortage of maidens like the full moon, and so many plot twists that stories like "The Story of Talha, the Son of the Qadi of Fustat, and What Happened to Him with His Slave Girl Tuhfa and How She Was Taken Away from Him and What Hardships Befell Until There Was Relief After Grief" feel like a delightful venture into Medieval Sweeps Week.

Stories like "The Story of Talha, the Son of the Qadi of Fustat, and What Happened to Him with His Slave Girl Tuhfa and How She Was Taken Away from Him and What Hardships Befell Until There Was Relief After Grief" feel like a delightful venture into Medieval Sweeps Week.

The narrative structures demand a patient audience; tales are often nested in frame stories (occasionally there's a story within the story within the story), and several are liberally sprinkled with poetic verse, with whole stanzas of the inscriptions woven into a beloved's clothes — detail lavish and exquisite.

For all the fascination these stories hold, though, the introductory warnings are necessary. Besides frequent virgin/sorceress dichotomies, the collection features a "Story of Arus al-'Ara'is and Her Deceit, As Well As the Wonders of the Seas and Islands," in which a ruthless, clever woman becomes so horrifying an example of women's treachery that just telling the tale is enough to cure a king's grief for his dead daughter. The "Tale of Ashraf and Anjab" is flatly racist — and, likely no coincidence, features intentional villainy in a main character. (Fools there are aplenty in the Tales; villains, notably fewer.)

But despite the surreal and occasionally outlandish trappings, the nature of this collection is characterized by a deep and abiding thread of religion. Religion and folklore are deeply twined, of course, from the Norse to the Greek to the Christian. But God, in Tales of the Marvellous and News of the Strange, isn't just a threatening Andersen cameo, or an obligatory deity, offered "They say — and God knows better" at the start of the tale. Here, God's a living force and the engine of every plot, whether guiding a shipwrecked passenger, granting mermaids supernatural powers, or providing jinni for the righteous. (A particularly poignant image, when a maiden's stranded far from her beloved: "God answered her prayer and folded up the desert for her.")

In stories that often span fifteen years and note "Relief after Grief" to alert the audience there's some end to the sufferings, the comfort of religion is palpable — the name of God holds the power to restore peace. "This letter comes to you from hope," a young lover writes; all these letters do.

It's second only, perhaps, to the comfort of stories themselves — a good story often rewards the teller, setting him free of bonds or reuniting him with his love and family. That so many of these tales are nested suggests the vitality and necessity of storytelling — in Tales of the Marvellous and News of the Strange, kings need a good yarn as much as anyone else. "I like long stories," the grieving king says, "as I want to get through the night." I have just the book for him.