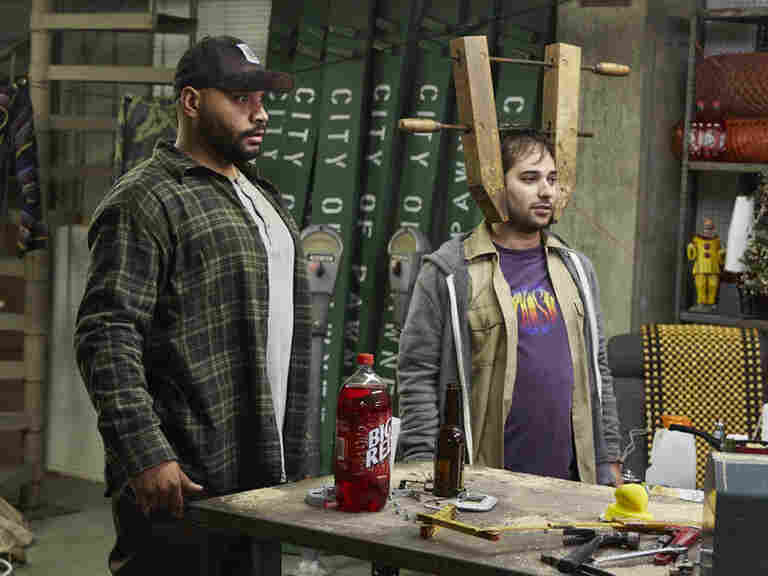 Along with Colton Dunn (L), Harris Wittels (R) played a bumbling member of the Pawnee animal control team on the show he co-executive-produced, Parks And Recreation. Ben Cohen/NBC hide caption 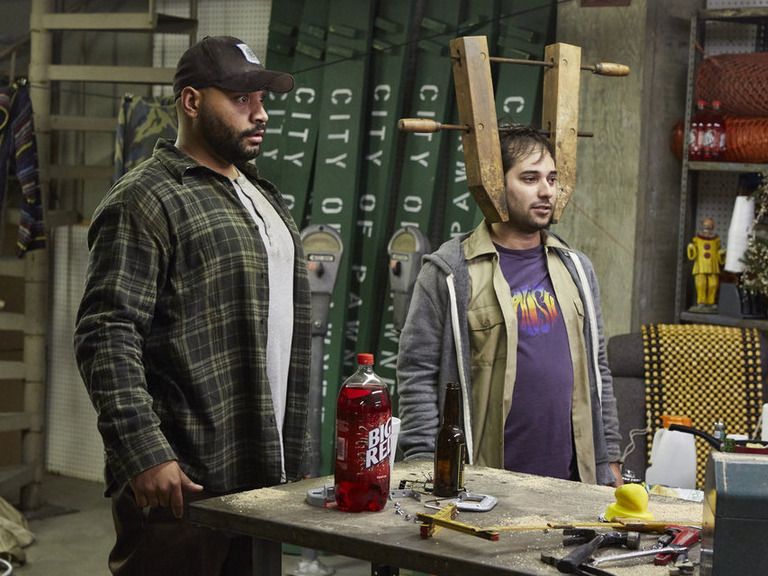 Along with Colton Dunn (L), Harris Wittels (R) played a bumbling member of the Pawnee animal control team on the show he co-executive-produced, Parks And Recreation.

Harris Wittels died Thursday. He was a stand-up comic, a television writer/producer, a musician, a frequent and dependably hilarious guest on comedy podcasts, and an author who unleashed the concept of the #humblebrag upon the cultural landscape.

When anyone dies, our sadness is tinged with something darker and more selfish; we resent the time we'll never get to spend with that person, the days and months and years that will pile up without their presence.

When a comedian dies, particularly one so young, we feel that resentment more keenly, because laughter is a limited resource - one of a very few things with the power to make those days and months and years pass more easily.

You'll see some writing today about Wittels' coinage of the term humblebrag – the tendency for people, celebrities especially, to express a distinctly performative brand of faux-humility on social media. It became a whole thing, the #humblebrag hashtag, one Wittels frequently expressed some misgivings about.

On Twitter, you can read some of his fellow comics weighing in on his stand-up and his music (with the band Don't Stop or We'll Die, formed with Paul Rust and Michael Cassady) while his fellow Parks and Recreation writers laud his singular contributions to that show. (By the way: You know Harris, Pawnee's Animal Control guy? That was him.)

But you and me, let's talk podcasts.

Wittels may not have been a household name – in your household, anyway. In my household, and in the households of the nation's comedy nerds, his name meant something. When you saw it listed as a guest on a given comedy podcast, as he was frequently on Scott Aukerman's Comedy Bang Bang (nee Comedy Death Ray), you dropped everything and started listening while the file was still downloading.

With Aukerman, he co-hosted the podcast Analyze Phish, a show whose premise (Wittels a Phish super-fan, Aukerman a bemused Phish-skeptic; they talk) does little to hint at its dogged, exultant silliness, or the exasperated affection the two men share.

I've used the word "affection" twice in the last two paragraphs, because that's the word that came through most clearly in every Wittels appearance: the guy was loved. You can hear it.

Here's a thing about podcasts – their loose, rangy, long-form format breeds a distinctive strain of intimacy. You're listening to a conversation between two or more people, with all the digressions and hoary jokes their shared history engenders, and it feels familiar, comfortable, warm.

Last November, Wittels made a second appearance on You Made It Weird, a podcast whose host, Pete Holmes, greets guests with a weaponized form of gregariousness that, if unchecked, can dominate conversations.

Listen to Wittels' appearance. You get past the ghoulishness of it quickly: yes, Wittels talks at length about cycling through addiction and recovery, and tells some harrowingly funny and off-handedly profane stories about his first, fumbling encounters with heroin. But listen to how Wittels tells them – how clear-eyed, unsentimental, brutally honest, and hilarious he is.

He's all of those things at once, each one bound up inextricably with the other. Listen to how Holmes – even Holmes! – gets quieter and quieter as Wittels talks.

It's a conversation that clocks in at an hour and forty minutes. It would never fit into the programmatic confines of radio or television; it flows, it doubles back, it halts, it lurches forward. It's a weird gift, is what it is.

Wittels is gone, and that's sad. Infuriatingly so. There's that familiar resentment – he was only 30 years old, which means we won't get decades and decades of his comedy.

But he was improbably and gratifyingly prolific. His Twitter feed (@twittels) is still there, still hilarious, still so recognizably him.

There's the Comedy Bang Bang and Analyze Phish archives, filled with Wittels' voice and humor and jokes so determinedly bad they shade into performance art.

So while mourning his absence, maybe spend some time today, and in the days and months and years to come, enjoying his digital presence.

Do a search. Listen. Laugh.